Today we step back inside the film room to take a close look at Bud Dupree’s progress in the Steelers system, something we’ve done regularly this season. The rookie played just 21 snaps on Sunday night, as did Jarvis Jones, well-behind the duo of James Harrison and Arthur Moats, who did combine for four sacks on the evening. While Tomlin has been open about the fact that the team plans to roll Dupree out a little more often moving forward, I think the desire to see Harrison chase the Steelers sack record in garbage time caused the coach to opt for seeing his backup edge rushers rather than the younger twosome. I wouldn’t read much into the diminished snap count.

That said, there can be no sugarcoating the slow progress Dupree is making as a pass rusher in his first season. As a run defender there are flashes of quality play, but some of his struggles in college are coming to surface at the next level now.

One of my bigger issues with Dupree’s college tape was that I didn’t think he had an instinctive nose for the football, which often left him reacting to the first thing he saw too aggressively. He does have the responsibility to contain the rollout on this play, but there is simply no reason to get sucked this far upfield.

Even if Hasselbeck does keep it, he’s no threat with his legs, and Dupree has more than enough speed to recover. Film study during the week should have showed him that rarely happens, and the ability to diagnose the play quickly could have meant helping out on the tackle. Instead Dupree works himself completely out of the play before realizing where the ball is, an issue that plagued him all game long.

Sees the trap block coming from the tight end, gotta flatten in a hurry and get down the line of scrimmage for the stop. Instead Dupree continues upfield several yards trying to go around the block, taking himself out of the play before the tight end even arrives.

To understand what I mean, watch Harrison do it successfully on the goal line from his right outside linebacker position.

Dupree’s first step is even faster than Harrison, so if he can simply learn to flatten that edge and drive down the line of scrimmage to the ball, he’s going to make some stops. Instead his inability to read-and-react quickly is taking him out of plays he could be making.

I don’t want to spend too much time on Dupree as a run defender, because he was drafted to get after the quarterback, something he has struggled to do when blocked. Remember, we talked about his advantageous matchup against Mars Hill rookie 7th rounder Denzelle Good, and while the right tackle wasn’t good, Dupree couldn’t take advantage either.

We’ll start with his best rush of the day, winning the edge against Good until the left guard comes over to help out. Decent chance Dupree could have gotten home here if not for the alert play by Lance Louis.

We haven’t seen Dupree with the edge a lot, but after watching Good get beat off the ball like a drum against Tampa Bay, the rookie pass rusher’s success here doesn’t surprise me. That burst off the line is still Dupree’s best asset, although it is good to see him show a little bend here too. Dupree beat him again later in the first quarter, forcing the guard to help ward him off for a second time.

We expected Dupree to finally have success winning the edge given Good’s slow get-off and lumbering kick step, but what happens when that option isn’t available to you as a pass rusher? I know it feels like we are beating a dead horse, but you have to be able to convert speed-to-power when it can’t convert to bend. This is still something Dupree is remarkably poor at, despite a well-built frame and perceivably solid play strength.

Dupree doesn’t have a good burst off the line here, perhaps a bit unprepared for the snap. As a result Good is able to set up quickly in his pass set, eliminating the edge as an option. Prime opportunity for Dupree to explode into a bull rush, then perhaps counter inside once he has the tackle off balance. Instead he comes in soft, dances at the top of his arc, and allows the guard time to work over and double him. As soon as Dupree hesitates at the top of his rush, its over. Have to be physical if you want to be a complete pass rusher. Huge missing ingredient for Dupree, he simply isn’t physical or nasty enough at the point of attack when getting after the quarterback.

Earlier in the game Dupree has another opportunity to bully Good, but failed to do so. 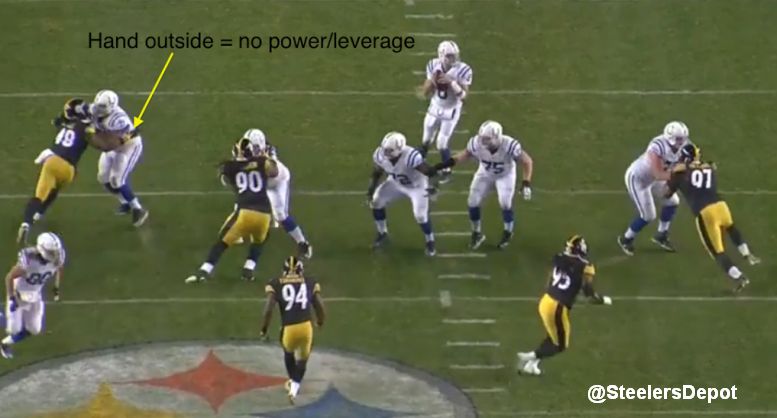 See Dupree’s right arm outside of Good’s left arm? That hand needs to be inside, controlling the blocker’s frame. Instead it is Good who has established position, and Dupree can generate no power in his rush, and his hands are useless to him. He’s got no choice but to step back and disengage, an instant win for the right tackle.

So while I was expecting to see Dupree win the edge a bit on Sunday simply due to his significant athletic advantage over Good, I was hoping he would show us a bit more from a pass-rushing repertoire perspective. He doesn’t show much technique right now, which is killing his ability to rush with power, or counter, or utilize a bevy of pass rush moves that could be available to him. Remember how often Good got doubled over against Tampa Bay in my scouting report? Great chance to use a swim move, something I haven’t seen Dupree do yet as a Steeler.

The reality is that right now, if Dupree can’t beat a lineman to the edge with quickness, he really has nothing else to offer as a pass rusher. We’ve talked a lot about Dupree’s bend and hip flexibility being pretty average, so the need to develop a more complete skill set is paramount to his success. You simply aren’t going to face rookie 7th rounders from Mars Hill every Sunday, meaning you better buck up, get physical, and use that powerful frame to bully opposing linemen. Right now, everything Dupree does is very scripted and predictable, but he has the ability to change all that with continued hard work and development.