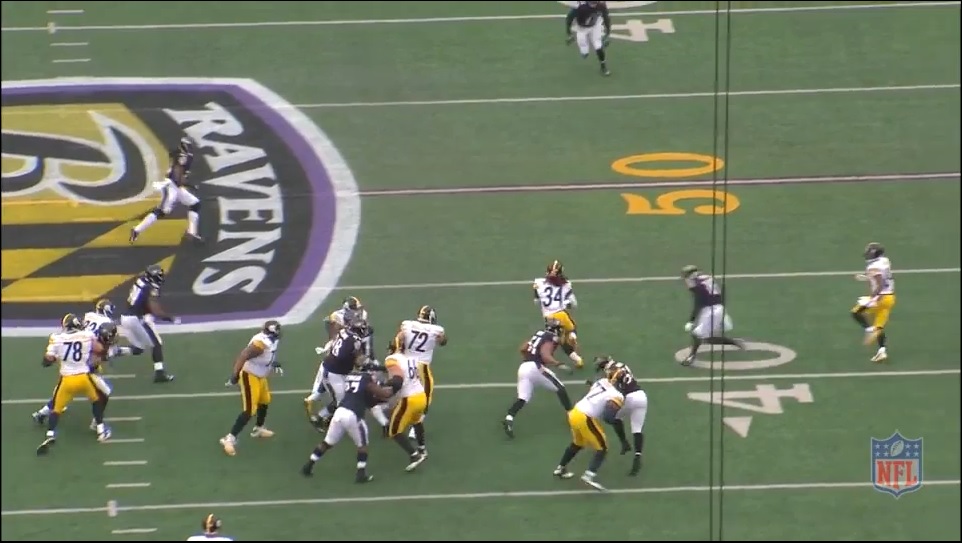 At the beginning of the season this was one of the games that the Pittsburgh Steelers absolutely circled. Not only are the Baltimore Ravens the arch rival of the Pittsburgh Steelers, but a late-season matchup in Baltimore would prove to be a late test for the potential playoff run of the Steelers. Although this defense is in shambles, it still provides some serious challenges along the offensive line. The Ravens lost Terrell Suggs for the season early but Za’Darius Smith, Courtney Upshaw, and Elvis Dumervil have filled in pretty well. Add in the fact that the Ravens have a top front 3 in the NFL, the Steelers o-line had their work cut out for them. Well let’s take a look at how are big boys fared on this disappointing Sunday.

We start with a 1st & ten on the Steelers first possession early in the game. The Steelers lineup in a 21 personnel formation with the strength to the left. The Ravens counteract this with a slightly shaded defensive line. The key blocks on this right side run will be by DeCastro and Gilbert; as well as the double team of Foster and Wallace on nose tackle Brandon Williams. Right tackle Marcus Gilbert gets a quality kick out block on Elvis Dumervil and David DeCastro eventually reaches defensive tackle Timmy Jernigan. Williams does a good job against a double team of Wallace and Foster.

Although he gives up some ground, Wallace is never allowed to reach the linebacker. Daryl Smith just takes a poor angle on the play. On the far left side Villanueva does a good job of walling the defensive end and Heath Miller does a good job outside linebacker. Fullback Roosevelt Nix also makes a good block on linebacker CJ Mosley. One nice cut by DeAngelo Williams and he is off to the races. Wonderful example of patient running and good blocking.

Now we fast forward to the second quarter and the Steelers are faced with a 1st & ten from their own 30. The Steelers come out in an 11 formation and in the shotgun set. They run a little 24 inside trap. The most important blocks will be once again by DeCastro and Gilbert. As well as the pull and lead by left guard Foster. Initially Gilbert and DeCastro get a solid push on Brandon Williams however once Gilbert leaves to go to linebacker it’s a different story. Williams’s gets under DeCastro’s pads to drive him into the hole; and eventually into DeAngelo Williams, essentially blowing up the play.

Gilbert gets a punch on Mosley, however he doesn’t bring his feet and lunges so he is easily dodged. The best block is by the pulling guard Foster who successfully kicks out to Elvis Dumervil. This play illustrates how difficult it truly is to dig out Brandon Williams and what a dominate lane stuffer can do against the run. Not that this is a new lesson for Steelers fans. Who could forget the indelible impact of Casey Hampton.

Now we backtrack to the first quarter, for the Steelers face a second and six on the thirty-six yard line of Baltimore. Pittsburgh comes out in an 11 personnel formation and lined up in the pistol. The play prior, the Steelers ran a reverse with Martavis Bryant and we’ll use that to hold the linebackers momentarily. This proves to be key as CJ Mosley is completely untouched however frozen by the fake reverse. DeCastro; along with a little help from Wallace, does an excellent job washing the 3 technique Lawrence Guy out of the play. Linebacker Daryl Smith over pursues and ends up getting washed out of the play by Gilbert. Accompanied by a fantastic reach by left guard Ramon Foster Williams is allowed at least 3 yards of space in the hole and goes almost 16 yards before contact. A very nice play call by Todd Haley here and great execution by the man up front.

Another 1st & ten this time in the 4th quarter at the Steelers 35. Pittsburgh comes out in the pistol again with a very similar looking formation. This is almost the identical play we watched earlier however this one does not have the fake reverse involved. The key block is once again between DeCastro and Gilbert. Initially they do a solid job coming together and Gilbert overtakes; however Jernigan is much lower and stops any momentum from Gilbert, eventually pushing him backwards. DeCastro goes to linebacker but is easily evaded.

Left guard Foster and center Wallace do a solid job on their end of the bargain. Foster easily overtakes Williams and Wallace gets to the backside linebacker however they were not anticipating a cut back and Brandon Williams is able to make a play. This play speaks volumes to the continuity that is needed on the offensive line. One player has a poor snap in the entire play is thrown for a loop.

Finally we move to the 2nd & nine in the fourth quarter at the Steelers 20 yard line. Late in the game the Steelers line up in a shotgun set with 11 personnel. The play is designed to be a five step hitch and throw. However Ben Roethlisberger has all day in a week to get rid of this one. The Ravens rush four and left tackle Villanueva washes the Za’Darius Smith down the line of scrimmage.

Last week against Denver I highlighted the importance of pass rushers staying in their lanes. This is a prime example of what can and will happen when you leave your Lane. Smith just keeps getting passed further down the line of scrimmage. As for the interior guys all three do a solid job. As Foster and Wallace double team to neutralize Williams and DeCastro stands up Jernigan. With help from a chip block from Heath Miller right tackle Gilbert runs Dumervil out of the play giving Ben ample time to step up and deliver an accurate pass for a first down. It is nearly five seconds between the ball being snapped and Roethlisberger releasing it. An excellent job by any standards for an NFL offensive line.

It wasn’t the kind of performance Steelers’ fans were hoping for. However the majority of the blame can’t go on the offensive line. The Steelers ran the ball surprisingly well 20 carries and 110 yards for 5.5 yards per carry. Ben Roethlisberger was sacked three times and hit two other times. On at least one of his interceptions he was under duress when he threw it. That still doesn’t excuse the poor decision and he would have rather have taken the sack then throw the interception. I find myself questioning why the Steelers abandoned the run game the way they did after so much early success. This was the definition of a must win in the Steelers just flat out didn’t get it done. The big men up front were not the reason why. However they will have a chance to finish strong and achieve 10 wins with a strong performance next week vs Cleveland.