Pittsburgh Steelers rookie tight end Jesse James dressed for the first time during his career Sunday in the team’s 38-35 win over the Oakland Raiders and the Penn State product did not disappoint in his limited playing time.

James, who was drafted this year by the Steelers in the fifth-round, had two catches Sunday for 13 yards and a touchdown in the win.

James’s first career reception came with 8:55 left in the first quarter as he caught a deflected pass from quarterback Ben Roethlisberger on a first down play. That catch was good for 9 yards.

With 11:28 left in the fourth quarter, James again made a key play in the game only this time it featured him blocking for wide receiver Martavis Bryant. After a quick first down pass to Bryant on the right sideline, James successfully blocked a Raiders defensive back and the Steelers wide receiver did the rest as he scored from 14 yards out on the play.

On the ensuing kickoff, fullback Roosevelt Nix forced a fumble that was covered by rookie linebacker Anthony Chickillo at the Raiders 6-yard-line. After a first down run for two yards up the middle by running back DeAngelo Williams, Roethlisberger hit James in the back of the end zone for a four-yard touchdown to put the Steelers up 35-21.

James was afforded the opportunity to dress Sunday due to tight end Matt Spaeth missing the game with a knee injury.

We’ll have a full breakdown of James’s play later on in the week as part of our Steelers Film Room segments. 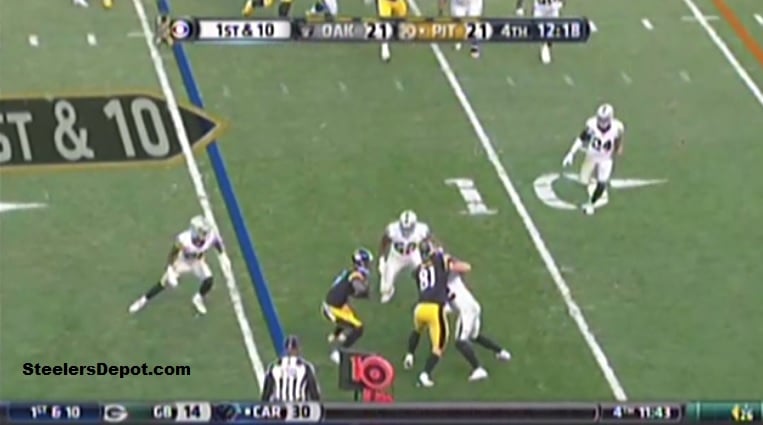