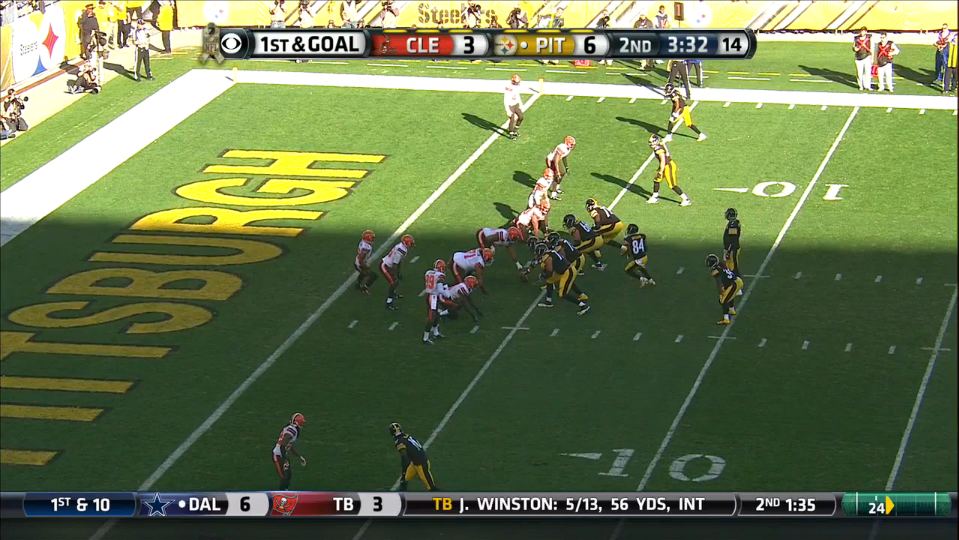 One look at the Steelers 30-9 victory over the Cleveland Browns, and the 459 yards piled up by the offense, and one would quickly draw the conclusion that Pittsburgh once again was dominant in all phases of the game. While there were instances that statement rang true, a closer examination of the game reveals that far too many holes still exist in the Steelers red zone offense despite the high point total.

I’ve broken down the Steelers drives in order for you below:

1. Quick 4-and-out withLandry Jonesin the game, as the Steelers failed to pick up a first down after Roosevelt Nix picked up ten yards on his first NFL reception on the game’s initial snap.

2. After anArthur Moatsfumble recovery on Cleveland’s first offensive snap, Pittsburgh can only generate six yards on three snaps, and are forced to settle for a Chris Boswell field goal. Jones is injured on third down throw. RZ Trip = 3 points

3. Lengthy drive brings Pittsburgh to the Cleveland 16 withBen Roethlisbergerin the game, but again they settle for a field goal. RZ Trip = 3 points

4. 64-yard pass to Bryant to the Cleveland 15, but the wide receiver fumbles and Cleveland recovers. RZ Turnover = 0 Points

5. Pass interference penalty moves the ball to the Cleveland 14, where again Pittsburgh can only muster five yards before settling for a third Boswell field goal attempt. A leverage penalty against the Browns on the field goal try gifts Pittsburgh a fresh set of downs from the Cleveland 4, which results in anAntonio Browntouchdown on the next play. So RZ Trip should have equaled 3, but became 8 (two-point conversion) thanks to Cleveland.

6. After another Cleveland turnover in their own territory, the Steelers work their way down for a first-and-goal at the ten yard-line. Two DeAngelo Williamsruns and a quick hitter to Brown brings the ball to the one-yard line. Roethlisberger’s pass to Brown is incomplete on 4th down from the one, but the Browns are offsides defensively. The Steelers get a fifth crack at the end zone from inside the Cleveland 10, and still come up empty as Roethlisberger overthrows Bryant by a mile on a fade route. Should also be noted Williams fumbled on 2nd down, and Pittsburgh was luckyHeath Miller came away with the recovery amidst of a sea of Browns defenders. RZ Trip = 0 points.

7. Three plays for Cleveland from their own one-yard line net zero yards, and the Steelers get the ball back with excellent field position. Roethlisberger converts it into seven this time, finding Bryant down the right sideline from 32 yards out for the score. Drive = 7 points

8. 77 yards of pass interference penalties gift the Steelers another red zone opportunity, but three shots from the Browns 12 net just five yards, as Roethlisberger’s third down throw to no one is almost intercepted. RZ Trip = 3 points.

9. Terrible interception by Roethlisberger who overthrows Miller on third down deep in his own territory.

So that’s six red zone trips resulting in 17 points (not counting the kneel-down), that would have been just 12 points (four field goals on six trips) if not for a fortuitous Cleveland penalty. That’ll work when you’re playing the Browns, but not many other teams are going to gift you that opportunity, or be overcome by mere field goals.

On the season, teamrankings.com has the Steelers at 16th in the NFL in red zone touchdown efficiency at 55.9 percent. That means Pittsburgh has converted red zone opportunities into touchdowns just 55.9 percent of the time this year. Don’t blame the low percentage on the quarterback carousel however, as the past three games with Roethlisberger under center the Steelers are at just 40 percent, tied for 27th in the league over that timespan. For an offense with this many weapons, a great mind at offensive coordinator, and one of the best quarterbacks in the game, that number is simply inexcusable. Add to that the fact that Pittsburgh’s last two games have come against a pair of the worst defenses in football, and the inefficiency becomes even more concerning.

Pittsburgh’s ability to hit the big play has saved them this season offensively, and that is commendable. They have so many weapons that can burn a defense, but unless they can take care of business inside their opponent’s 20 with greater regularity, the Steelers are going to get burnt themselves. They should be thankful to have been playing the Browns on Sunday, otherwise the game might have been much closer than the final score indicated due to the team’s red zone offensive woes.