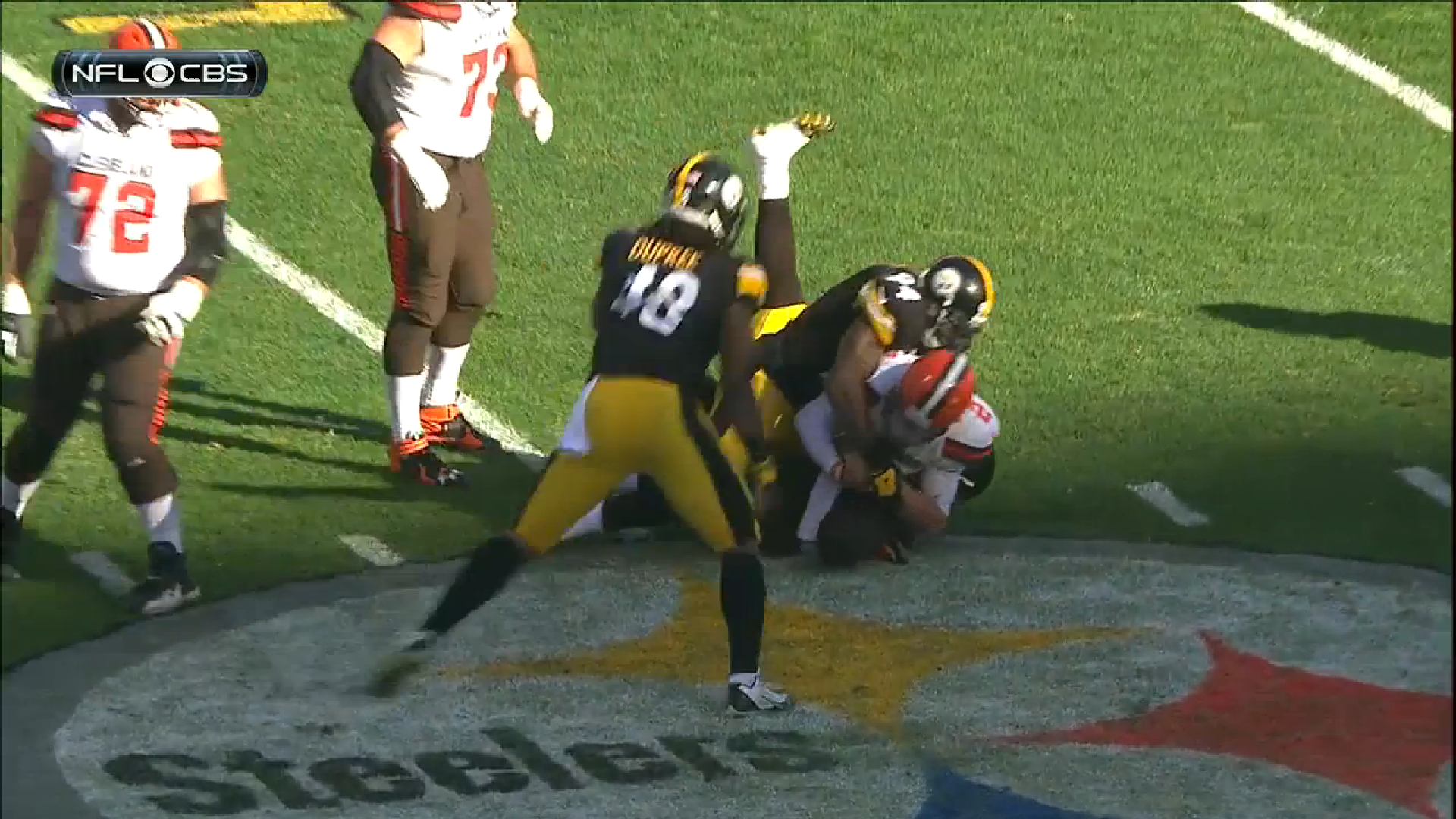 The 2015 season hasn’t been the easiest for ninth-year veteran Lawrence Timmons. A year after making it to the first Pro Bowl of his career, the first ever Mike Tomlin draft pick has struggled for the Pittsburgh Steelers this season after battling a toe injury during training camp.

Whether or not that injury has affected his performance I cannot speak to, but he has not played up to his usual standards this year, particularly when it comes to being a sure tackler. It has been such an issue that I feel compelled now to point out when he plays well, as was the case on Sunday against the Browns.

His first notable play of the game put an end to the Browns’ first full drive, after Johnny Manziel’s fumble on the first offensive play of the game. Facing a third and goal from the 11-yard line midway through the first, Manziel scrambled to his left and found Travis Benjamin, who looked to possibly have the edge to the sideline.

After Ross Cockrell forced him back inside, he missed wrapping him up, but Timmons, the big linebacker, was able to corral the slight receiver and bring him down at the five-yard line to hold the Browns to a field goal.

On the final play of the first quarter, on yet another third and 11, Manziel tossed a screen to running back Duke Johnson, but Timmons was quick to break on it, and fought through a strong stiff arm to get just enough of the runner for his momentum to carry him down.

The veteran was able to put the finishing touches on a third consecutive Browns drive midway through the second quarter, when he came in on a blitz and sacked Manziel for a 10-yard loss.

After Ryan Shazier had taken out the back, Timmons rushed late, but with authority, and the second-year quarterback had nowhere to go. The sack gave Timmons 30.5 for his career, becoming the fourth linebacker in team history with 30 sacks and 10 interceptions.

At the end of the half, after the offense failed to convert on fourth and goal at the one, the defense forced a three-and-out. Timmons came up with the key stop on second down, attacking the C gap and bottling up Isaiah Crowell, getting an arm on him as he became stuck at the line of scrimmage. It was all the back could do to just fall forward and out of the end zone to avoid a safety.

Early in the third quarter, after the Steelers notched a sack for a seven-yard loss on first down, the defense brought Timmons in on another blitz getting a good hit on Manziel and knocking him to the ground. The back seemed oblivious to the rush, but the throw was out too quickly, and complete for a 15-yard gain.

Timmons stuffed Johnson in the hole for no gain two plays later as the defense clamped down and forced a punt, but the rookie back would get the better of him later in the quarter.

On third and four, just on the cusp of field goal range, Manziel found him on a screen pass. While Timmons was able to weave his way through the caravan of linemen in front to block, he undercut the final one inside, and Johnson was too fast for the linebacker to make up that ground, as he picked up 10 yards.

Overall, it was easily one of the better games of the season for the former first-round draft pick, able to make some impact plays on key downs, with few mistakes. The Steelers will need more of that from him coming out of the bye week.