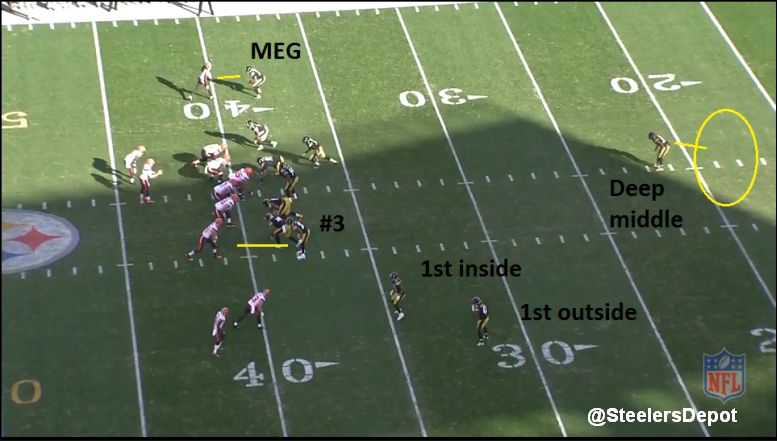 We’ve written about the Pittsburgh Steelers’ Fire X blitz before. It was a staple of Dick LeBeau’s attack, even if it was one phased out towards the end. Our attention usually is on the blitz itself and less on the coverage. We’ll talk about the blitz briefly here but I want to focus on some of the coverages behind it. The ability to pair the rush with sound coverage is what makes a near-perfect defense.

The reason to write about this now is just how much more prevalent the Fire X has been. Based on my charting, the Steelers have blitzed both inside linebackers 15 times over the last four games, the majority of those being the Fire X. Compare to that seeing it just four times during the first six weeks.

It’s seen a lot of success over that time span, generating four sacks, or one 26.7% of the time. Not a bad rate to get home.

The Steelers pair their blitz with two coverages. A Cover 3 match on early downs and Cover 2 Man on third and long. We’ll look at both.

We’ll start with the latter, their man coverage.

This comes in on 3rd and ten in Week 9 against the Oakland Raiders. With both backs staying in, the Steelers rush six. Three under, two deep look over the top. The cornerbacks play trail technique (inside hip of the WR) to rob any intermediate routes while the safeties take away anything vertical. 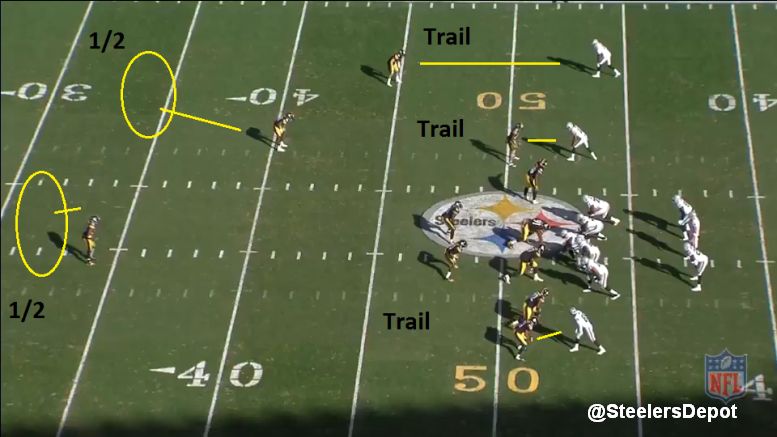 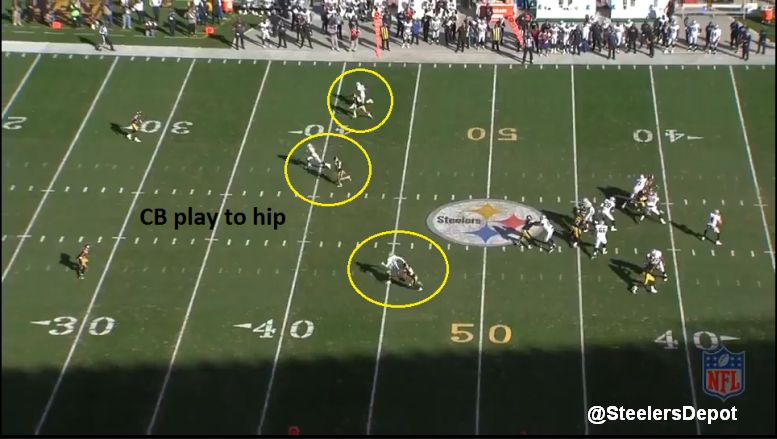 There is a little bit of pattern reading here, too though. Watch nickel corner William Gay. With #2 vertical, he’s working his eyes to #1. A common combination with #2 vertical is a split dig with #1 working on a crosser. Gay slows down as he sees #1 chop and break but the receiver runs a comeback instead of a dig. It’s why you see a little bit of separation from Gay but knowing he has help over the top, he can afford it. 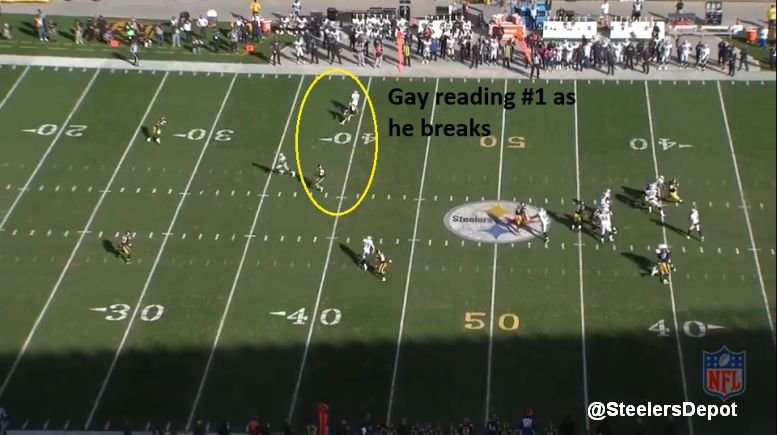 This man coverage allows the corners to play tight, contested coverage. Antwon Blake is able to break with Michael Crabtree on the comeback, forcing a tough throw to the sideline and one Crabtree can’t haul in. 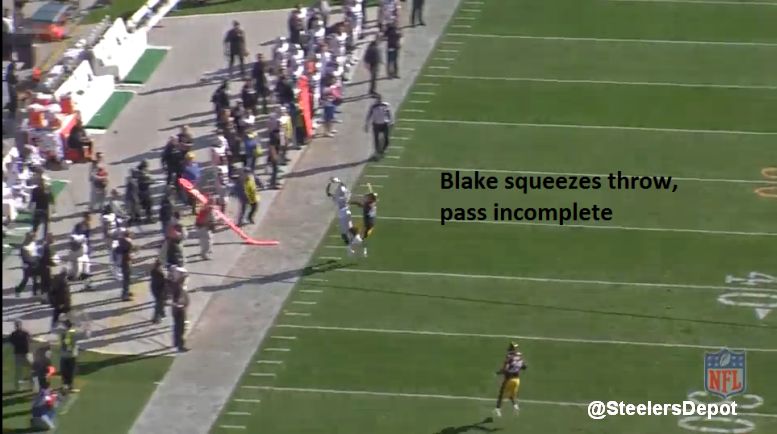 The Raiders are forced to punt and the Steelers find the end zone on the following drive.

Our next example comes on 3rd and long but instead, we’ll get the Steelers single-high look. 3×1 set, a common look the Steelers will check their blitz to. To the backside, top of the screen, we’re going to get a MEG call. Man everywhere he goes and it’s a common assignment to an isolated receiver. The safey that drops down, Will Allen, is responsible for #3, and widens on his outside release. 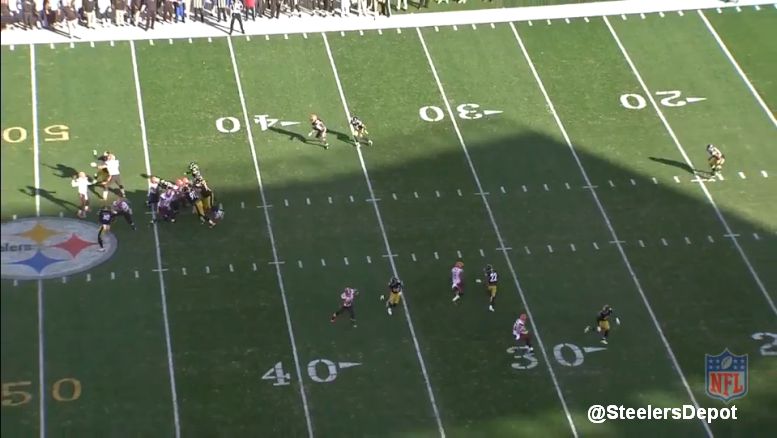 The blitz gets home with Lawrence Timmons free up the middle, sacking Johnny Manizel.

Quick look at the blitz. Instead of trading A gaps, the blitz is executed a gap over with Shazier slanting into the C gap with Timmons scraping over the top while Jarvis Jones rushes wide to occupy the left tackle. Beats the Browns’ slide protection to the right, leaving Timmons unblocked. 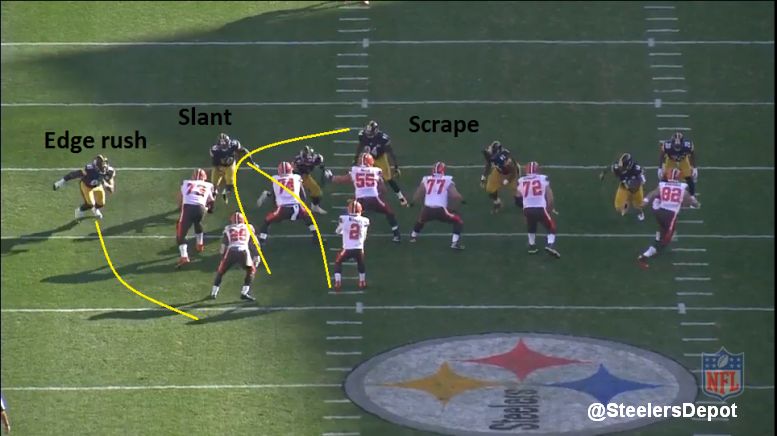 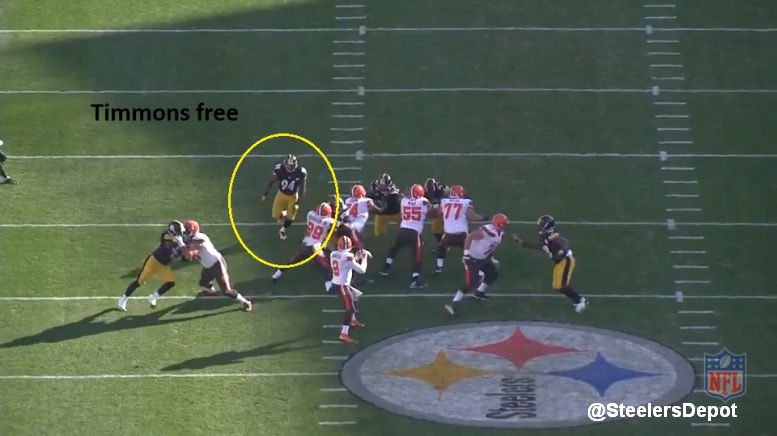 Our last example comes back in Week 8 against the Cincinnati Bengals. 1st and 10. Single high look from the Steelers. Fire X with the LBs switching gaps. Three deep, three under, with a five man rush, though the CB to the top basically plays man coverage without any other vertical threat, so he carries the crosser. OLBs drop into hook zone with the drop safety playing the underneath middle in a very traditional Fire X fashion.

As the fullback, originally lined up split wide, is motioned back, Will Allen slides inside too. He no longer has to worry about being unable to get width in time against #2 in the flat and can settle inside to help play the run, too. 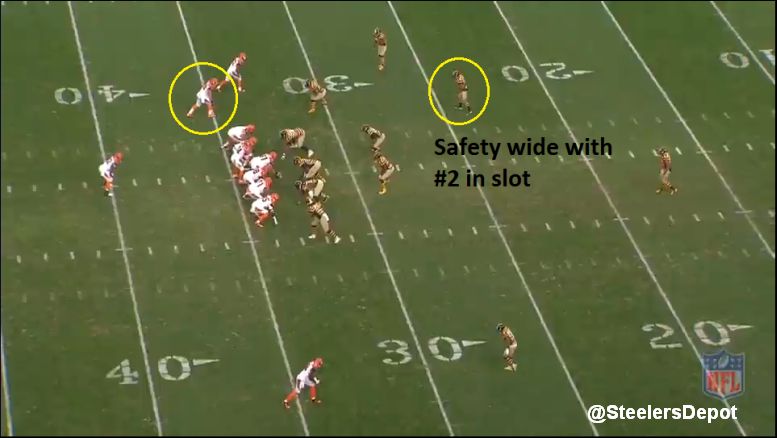 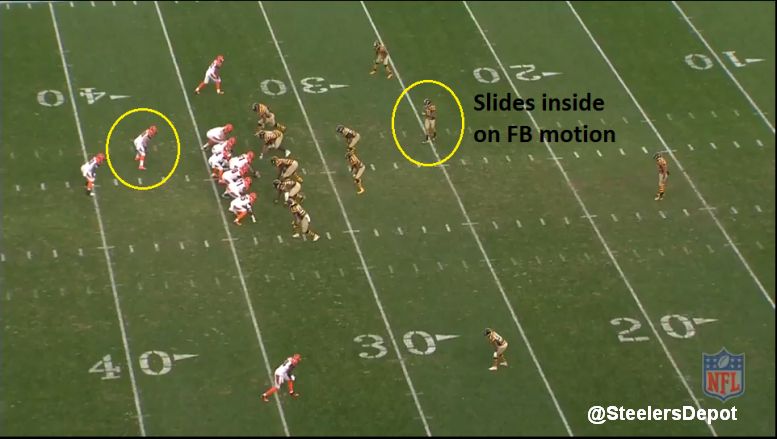 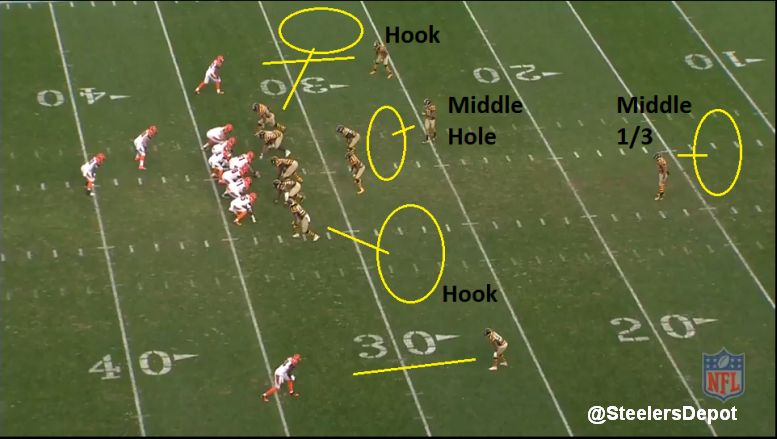 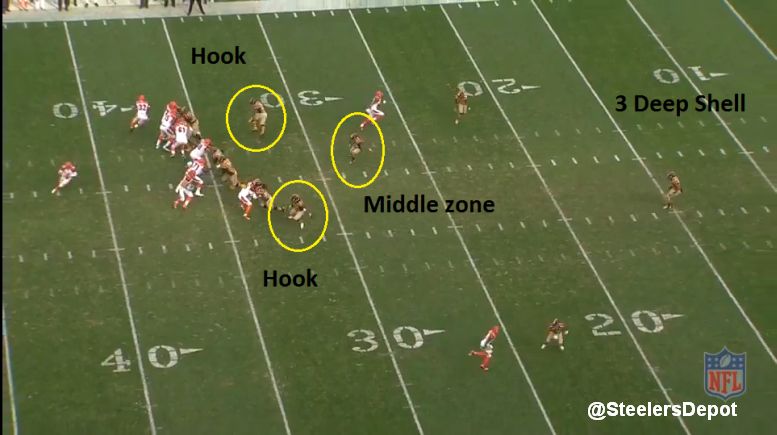 What I love about this is the ability to get eyes on the QB. Look at the screenshot below. Everyone, with the exception of Blake struggling with his coverage, has their eyes on Andy Dalton. Allows you to break on the ball immediately as soon as you see the QB start his throwing motion. 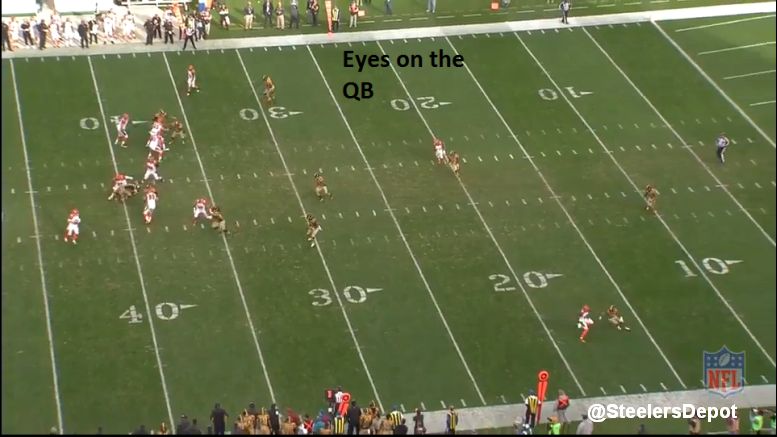 Nowhere for Dalton to go with the ball, especially with the deep safety Mike Mitchell squeezing #1 vertical to the bottom, so he’s forced to eat the ball and take the sack. A drive that started at the Steelers own 42 ends in a punt and it begins with the negative play on first down.