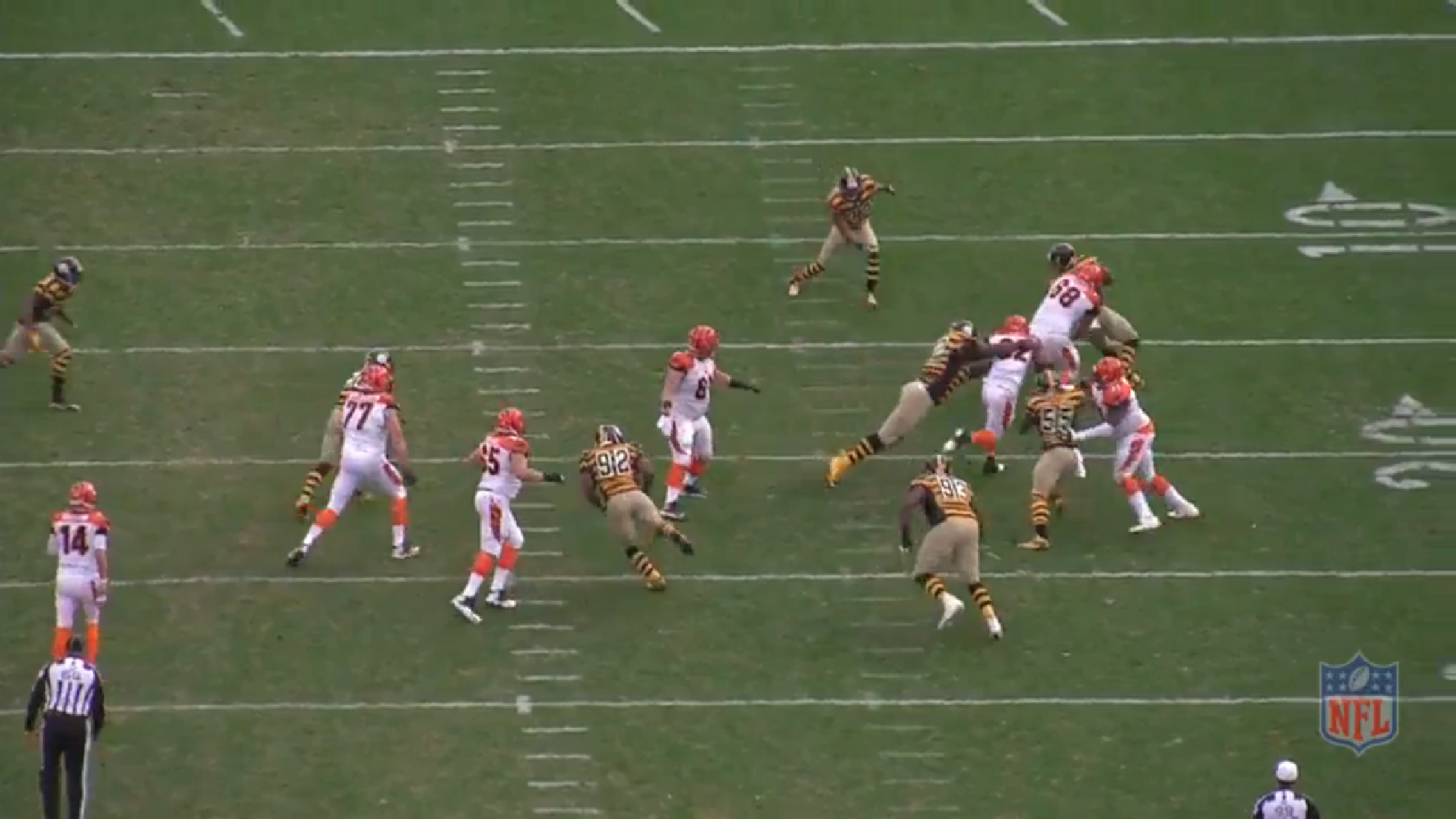 While it would not be accurate to say that the Pittsburgh Steelers had big plans for their big nose tackle, the fact is that second-year defensive lineman Daniel McCullers suffered a notable knee injury in the second game of the season has complicated their defense to a degree.

Shuffling depth has gotten more complicated, but McCullers finally returned to significant play Sunday against the Bengals, playing a couple dozen snaps, mostly as the nose tackle in the rare instances that the Steelers actually played in their base package.

Pittsburgh put the big man in early in the second quarter, bowling through the center on first and 15 after a false start. After briefly angling to his right, McCullers went for the old-fashioned bull rush, using his long arms to keep Bodine out of his frame. In an almost comical scene, the big nose tackle basically reached his long arm over the center in an attempt to grab Andy Dalton, after which he fled the pocket and scrambled for a one-yard gain.

McCullers got the better of Bodine again later in the quarter, again from the nose tackle position, hand-fighting his way free initially, but as Dalton shuffled to his right, the center was able to get back into a position to check his rush, and the quarterback was able to step into a short pass over the middle for seven yards.

Late in the third quarter, on a second-and-six carry against the Steelers’ nickel defense, with McCullers as the left defensive end, a missed blocking assignment allowed Cam Thomas a free release into the backfield, but was unable to make the tackle.

Jeremy Hill cut sharply to his right, but McCullers freed himself from the center and used his abnormally long arms to stretch out and pull the back down after a five-yard gain. While it was a successful play for the offense, it’s good to see the big man flash the ability to make a play for himself.

Late in the game, on the first play of a Bengals drive, McCullers was put on the ground by an initial double team and the eventual overflow of the line working inside as bodies toppled around him, but the play went for a loss of one yard.

On the following play, the Steelers moved back to their base, leaving just the center to block McCullers. Hill ran to his right and found some space, but as he cut back inside he was engulfed by the nose tackle after picking up six yards.

On second and 10 from the 17, the play before the go-ahead score, the nose tackle again got push in the pocket against Bodine, keeping one arm free to harass Dalton, but again the action merely forced the quarterback to vacate the pocket, this time dumping the ball off to Hill for an eight-yard gain.

This is some of the most extensive work that McCullers has gotten in his career thus far, and overall, it looked pretty good, with some positive signs, including some aggression and an ability to make some plays. He needs to more consistently finish on his bull rush, but it was an important showing for the young reserve in a game in which the Steelers were hurting for depth.