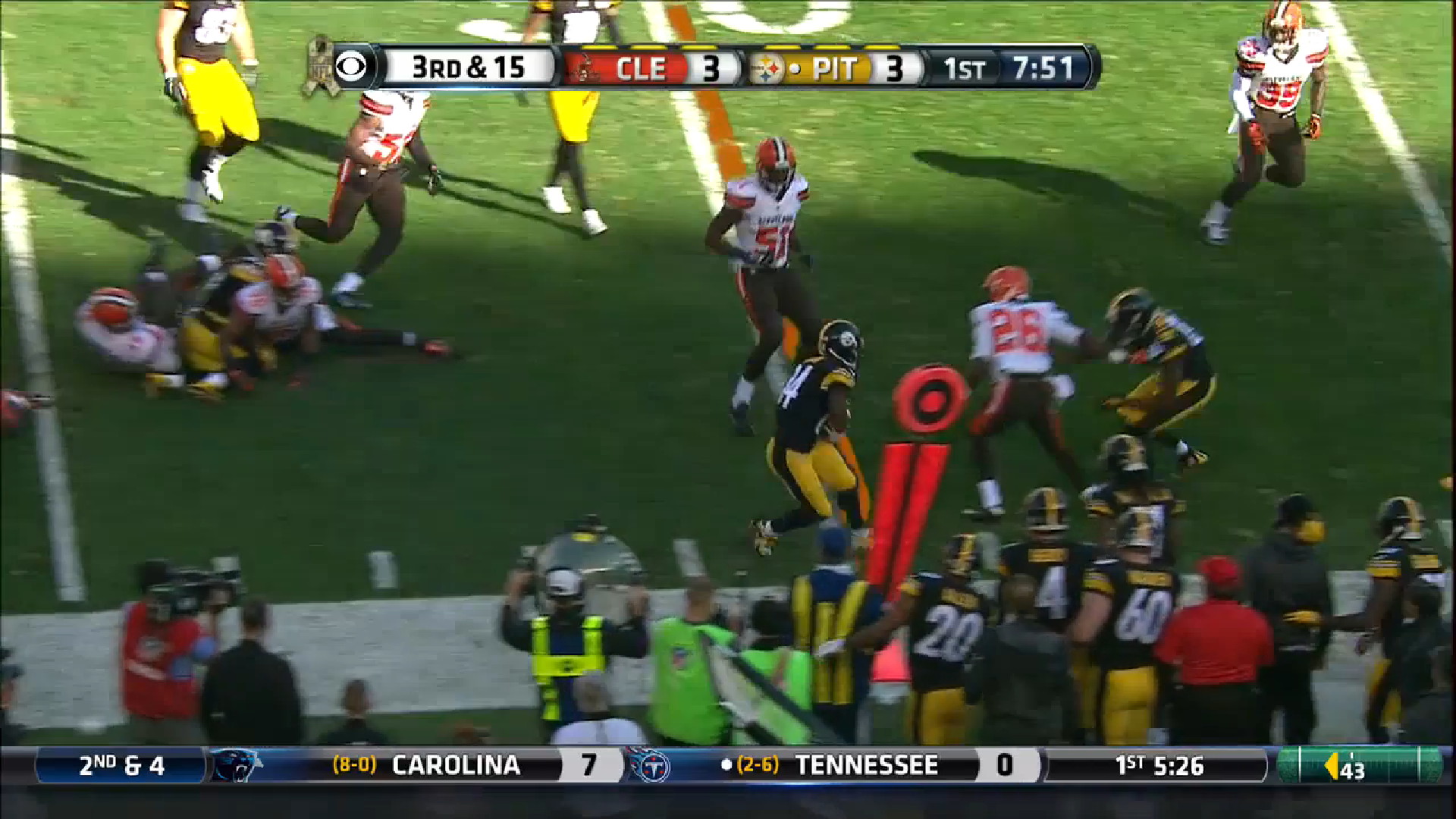 Pittsburgh Steelers wide receiver Antonio Brown is so talented, and shows it so often, that his teammates and coaches openly acknowledge that they take his abilities for granted. When he actually has a quarterback to work with, he has been so consistent that it’s difficult not to take his production as a given.

Brown does not get credited with as many missed tackles as his contemporaries because his shiftiness often allows him to avoid those tackle attempts altogether without having to actually escape the attempt.

A fine example would be his early, improbable 16-yard reception on third and 15. Though there were three defenders left in his wake, only one was even able to make a cursory attempt at bringing him down, an optimistic hope at that.

About a quarter later, the sixth-year veteran helped illustrate one of the tools in his bag that has led him to such great success, and such a strong rapport with Ben Roethlisberger. Seeing his quarterback fleeing the pocket, Brown did the smart thing and simply ran away from the coverage, creating the separation to make a throw possible, resulting in an 11-yard completion. It seems a simple thing, but a surprising number of receivers are unable to do this consistently.

That was the second play of a 10-play drive that ended in a four-yard touchdown pass to Brown, after the Browns were flagged for a penalty on a field goal attempt and gave the Steelers first and goal at the one. It wasn’t overly complicated, and was built off of past looks put on tape, but he and Roethlisberger used a pick to get inside the middle of the coverage in the end zone for the score.

Late in the quarter, on the first of a two-play drive, Brown put the Steelers at the 32-yard line by bringing a 20-yard pass to open things up. Facing man coverage, Brown got a release to the outside when the cornerback failed to jam him.

As he turned to his right to the outside part of the field, the receiver turned the corner to the inside of the field, spinning the defensive back around. A false cut upfield helped win him the last bit of separation needed to secure the pass that was already on its way.

Of course, the story has to end with his second touchdown of the game, a 57-yard catch-and-run in the fourth quarter that was a response to the Browns’ lone touchdown and essentially put the game out of reach.

On first and 10, Brown lined up on the outside of the numbers on the short side of the field, in a five-wide look and the back in the slot the only other one on his side of the field. With the outside corner playing 10 yards off, with no deep safety, he had but to beat the cornerback, with all of the middle of the field to work a favorable angle, before he was flipping into the end zone.

Roethlisberger missed four games this year, and Brown’s numbers took a nose dive as a result, and yet he is still on pace to break his own franchise yardage record, and his 27 receptions in the last two games has put his receptions number into play as well. I shudder to think what he may have accomplished this year with consistency from under center.