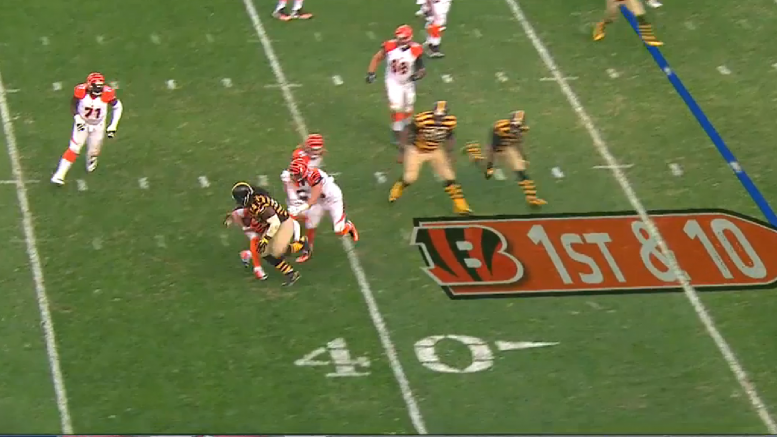 Pittsburgh Steelers nose tackle Steve McLendon never really has gotten the respect that he deserves so far during his career and that’s probably because he had to follow in the footsteps of the great Casey Hampton. During a Thursday interview with Missi Matthews, Steelers defensive coordinator Keith Butler was asked if McLendon doesn’t get enough credit for all of the things he’s able to do.

“Oh yeah, no doubt,” said Butler. “He’s mainly been a nose guard for us. We knew that he could play the 3-technique and do the stuff we ask him to do so we move him around a little bit. We play a little bit different fronts, were not always playing the same front that we played last year. That’s the only front he played.

This past Sunday in the loss to the Cincinnati Bengals, McLendon played a career-high 56 snaps and that included him playing left defensive end in the Steelers base unit in addition to left defensive tackle in the sub packages. While he only recorded two tackles in the game, one of those was a sack.

With the status of starting defensive end Stephon Tuitt still being up in the air for Sunday’s home game against the Oakland Raiders, there’s good chance we see McLendon called upon to deliver once again on the left side as it’s obvious now that Butler no longer wants to play Cam Thomas very much if he can help it. That course of action would result in Daniel McCullers again seeing more time at nose tackle in the Steelers base defense and Butler liked what he saw out of the former sixth-round draft pick this past Sunday.

“Dan did a good job,” said Butler. “He put some pressure up the middle. He’s a big guy that’s very hard to stop. You get him isolated on the center, the centers going to have his hands full. He’s going to be hard to stop if he’s rushing over top of you and Steve did the same thing.”

McLendon is currently in the final year of the three-year contract he signed in 2013 and the Steelers would be wise to try to re-sign him during the offseason. So far this season, opponents have averaged just 2.15 yards per rush when he’s been on the field.