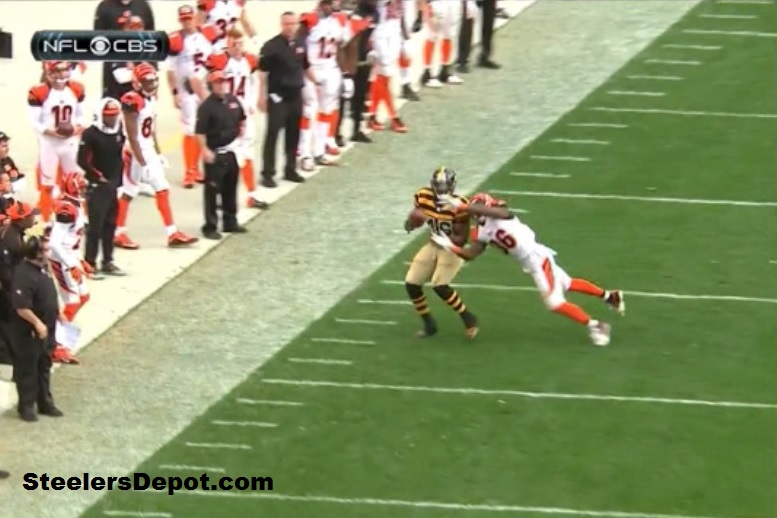 While it certainly was great to see Pittsburgh Steelers starting quarterback Ben Roethlisberger back on the field again Sunday for the team’s key home contest against the Cincinnati Bengals, the veteran again didn’t play well in his first game back from an injury.

“Disappointed in my play,” Roethlisberger said after the game. “Letting this team down, letting the fans down and this one’s on me. I’m fine with taking that blame and let everyone know that I have to play better.”

After ending the first half having completed 13 of 21 passes for 98 yards and a touchdown to wide receiver Antonio Brown, Roethlisberger could only drive the Steelers offense for one second half field goal in the team’s final seven possessions.

Roethlisberger’s first interception, a deep pass down the right side intended for Brown, wound up not resulting in any points. His second two interceptions, however, were very costly.

With 5:46 left in the fourth quarter, Roethlisberger forced a pass to fullback Will Johnson down the left sideline after initially escaping the rush to that side of the field. Safety Shawn Williams made a diving catch in front of Johnson at the Steelers 45-yard-line on the play. Six plays later, the Bengals turned that interception into their only touchdown of the game that gave them a 13-10 lead with 3:01 left in regulation.

On the first play of the Steelers ensuing offensive possession, Roethlisberger’s overthrown pass to Brown in the middle of the field was picked off by Bengals safety Reggie Nelson, who was responsible for intercepting the quarterback earlier in the game.

After Nelson return that interception to the Steelers 26-yard-line, the Bengals kicked a field goal three plays later to go up by 6-points with 1:51 remaining in the game.

With Sunday’s loss, Roethlisberger is now 2-5 in his first games back from an injury during his career. In those seven games, he is 134-of-223 passing for 1,413 yards with 9 touchdowns and 10 interceptions. He failed to throw for more than 285 yards in any of those seven games.