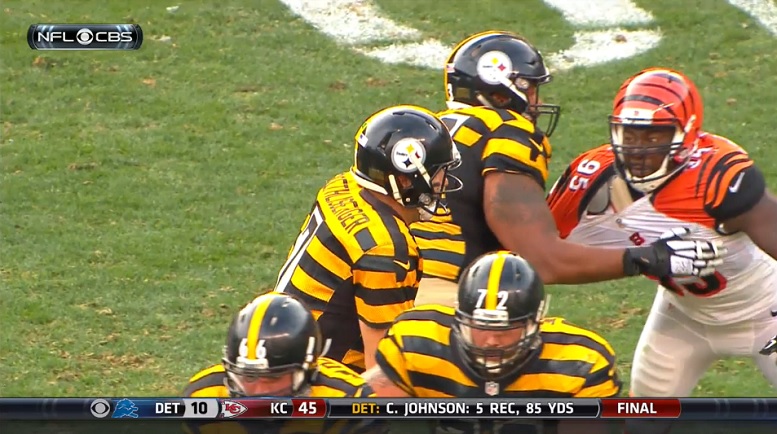 Against the Bengals, the Steelers were penalized a total of 10 times for 91 yards and both of those totals were season-highs.

“We just came up short and really, the reasons are very tangible. We were more penalized than we normally are and we turned the ball over more than we normally do,” said head coach Mike Tomlin after the game.

Several of the Steelers penalties on Sunday, as you can imagine, were critical. For example, when cornerback Brandon Boykin ran out of bounds uncontested while covering a 54 yard punt by Jordan Berry, the Steelers had to punt again as the Bengals were also flagged for an illegal block above the waist on the play. So, instead of the Bengals starting their drive on their end of the field, their offense started at the Steelers 39-yard-line after Pacman Jones returned the second punt by Berry 18 yards.

The next crucial penalty on the Steelers came with 7:44 left in the third quarter as guard Ramon Foster was flagged for holding when quarterback Ben Roethlisberger scrambled up the middle for 10 yards on 3rd and 6 from the Bengals 18-yard-line. Instead of having the football 1st and goal at the Bengals 8-yard-line, the Steelers were faced with a 3rd and 16 from the Bengals 28-yard-line and subsequently had to settle for a field goal.

Sure, that holding call is probably semantics as Roethlisberger likely would’ve been tackled for a short gain on that play, but you never really know how it would’ve played out being as the Steelers quarterback is normally tough to bring down.

At the beginning of the fourth quarter, the Steelers were driving for a score and they had the ball at the Bengals 25-yard-line. A hold by tight end Heath Miller on 1st down moved the offense back 10 yards and two plays later Roethlisberger was sacked. The team then had to punt due to them being out of field goal range.

I could detail a few more penalties, for you, but I think you get the picture.

The Steelers will most definitely need to get these penalties cleaned up next week for the crucial Sunday game against the Oakland Raiders, who they are now battling for a Wild Card spot.