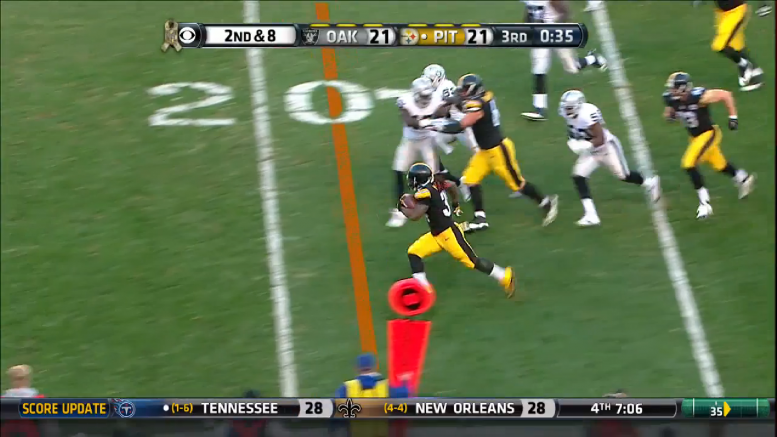 It certainly seems as though it’s been a while, but just past the halfway mark of the 2015 season, the Pittsburgh Steelers can accurately say that they boast a top-five rushing attack, ranking exactly fifth league-wide with an average of 133.4 yards on the ground per game.

That statistic is impressive in and of itself, but corroborating statistics tell an even more compelling story. While they boast the fifth-highest average rushing yards gained per game, they rank a mere 17th in rushing attempts per game, a statistic in which they trail all four of the teams who have a higher yards per game average.

Yet the Rams still attempt 27.8 runs per game, while the Steelers average just 26.3 attempts, or a full carry and a half less per game. You may see what I’m ultimately driving at here by now.

Not only do the Steelers have a top-five rushing attack in terms of sheer volume, they also have the most efficient, ranking first in yards gained per attempt, the only team in the league to post a mark above the five-yard barrier.

The Steelers have gained a total of 1201 yards on the ground—currently the most in the league, but they have not had their bye week yet—and done so on 237 attempts, which translates to roughly 5.1 yards per attempt. The Rams and Dolphins are next on the list, averaging roughly 4.9 yards per attempt.

Pittsburgh also gains a first down on 24.5 percent of its runs, which ranks tied for ninth in the league, and they lead all teams with explosive plays on the ground with 13, two more than the next-closest team. Only the Rams, with four, have more than the Steelers’ three rushes of four yards or more.

The Steelers are one of just six teams who have fumbled only once or not at all on rushing plays, and frankly I cannot recall a Steelers fumble on a rushing play. This statistic must count a Mike Vick scramble and fumble; otherwise, Pittsburgh has been clean.

Also a significant improvement from last season is the fact that this Steelers team is averaging a touchdown run per game, with DeAngelo Williams leading the way with five. All five of those touchdowns have come in his last two starts.

Adding to the total are the three touchdowns that Le’Veon Bell recorded in his first three games, one in each, including the walk-off game winner in San Diego, as well as a surprising goal line crossing from Will Johnson in the season opener. Only five teams have more than the Steelers’ nine rushing touchdowns, with the Falcons and Bills sitting on top with 11.

Simply put, the Steelers have been phenomenal running the ball this season when you consider all of the mitigating factors that should have hurt their success. Without Maurkice Pouncey all season, and down Kelvin Beachum for the past few games, they have been down to two backups along the offensive line.

Ben Roethlisberger has also missed all or parts of six of their nine games, without a compelling force to drive the safeties back in his place. Much credit goes to the line and tight ends blocking, and even the receivers gets some credit for their work on the edge, but Bell and Williams have simply outdone themselves this year, and the Steelers are still afloat because of it.