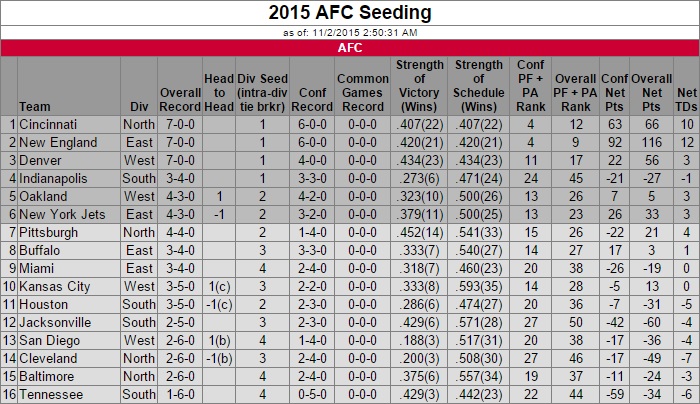 With nine weeks of football remaining in the 2015 NFL season, the AFC North race is close to being over thanks to what took place on Sunday with the four teams in the division.

The headliner Sunday in the AFC North was the game between the Pittsburgh Steelers and the Cincinnati Bengals. Had the Steelers won the game, they would’ve crawled back into contention for the division. However, due to them losing 16-10 to the Bengals, it’s only just a matter of time before Cincinnati will officially clinch the AFC North.

In Sunday’s loss to the Bengals, Steelers quarterback Ben Roethlisberger was intercepted three times in the second half and that led to Cincinnati scoring 10 of their 16 points. Additionally, the Steelers nine penalties in the game certainly didn’t help their cause.

The Steelers must now get ready to host the 4-3 Oakland Raiders next Sunday at Heinz Field in what is a now a very crucial game for both teams.

In other Sunday AFC North action, the Baltimore Ravens beat the San Diego Chargers 29-26 as kicker Justin Tucker kicked a 39-yard game-winner as time expired. Ravens quarterback Joe Flacco threw for 319 yards and one touchdown in the win and 9 different receivers registered receptions in the game.

While the Ravens did win on Sunday, they did lose veteran wide receiver Steve Smith for the remainder of the season to an Achilles injury. The 2-6 Ravens will be off on their bye in Week 9.

As for the Cleveland Browns, they lost 34-20 at home Sunday to the Arizona Cardinals. Browns quarterback Josh McCown only threw for 211 yards in the game but he did have three touchdown passes of which two went to wide receiver Brian Hartline.

The 2-6 Browns now have a short week ahead of them as they will play the undefeated Bengals Thursday night on the road.

As things stand right now in the AFC, the Raiders and New York Jets currently own the final two Wild Card playoff spots. The Steelers, however, can move back into one of those spots with a win over the Raiders on Sunday.

As for the 4-3 Jets, who lost on Sunday to the Raiders, they will host the Jacksonville Jaguars in Week 9.