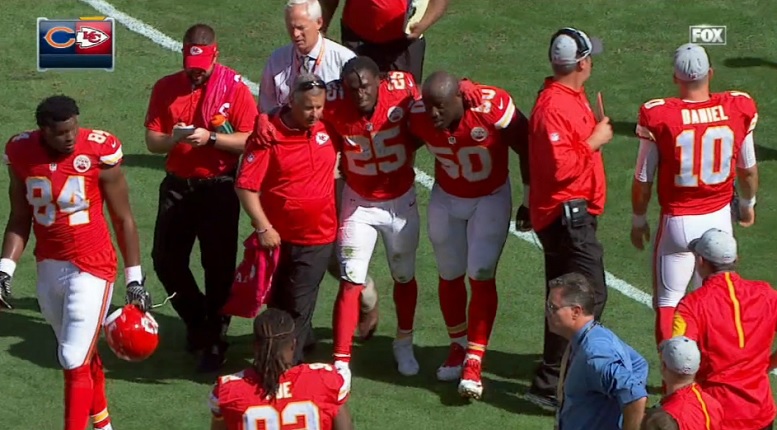 Injuries are part of the game of football and they certainly play a big part in shaping matchups in the NFL on a week-to-week basis.

Sunday, the Kansas City Chiefs suffered an injury to a key player that will most definitely wind up shaping the rest of their season as veteran running back Jamaal Charles reportedly tore his right ACL against the Chicago Bears.

Charles is scheduled for an MRI on Monday to confirm that he will be lost for the season.

Charles had already registered 541 yards of offense for the Chiefs in addition to scoring 5 of their 12 touchdowns. His absence will certainly be felt and the Chiefs will turn to Charcandrick West and Knile Davis to replace him.

The 1-4 Chiefs will play on the road in Week 6 against the Minnesota Vikings and they’ll host the Pittsburgh Steelers in Week 7 at Arrowhead Stadium.

Injuries already figure to play a big part in the Steelers home game next Sunday against the Arizona Cardinals as linebacker Alex Okafor, safety Chris Clemons and linebacker Kenny Demens will all need MRI’s on Monday after being injured Sunday in their win over the Detroit Lions.

With Okafor expected to be out next week, you can bet that former Steelers linebacker LaMarr Woodley will be starting Sunday for the Cardinals. Additionally, rookie Markus Golden might have to start on the right side.

The Steelers, however, still need to get through their Week 5 Monday night game against the San Diego Chargers without additional injuries. They’ll be without the services of quarterback Ben Roethlisberger and linebacker Ryan Shazier Monday night and cornerback Cortez Allen also figures to sit out once again with his knee problem.