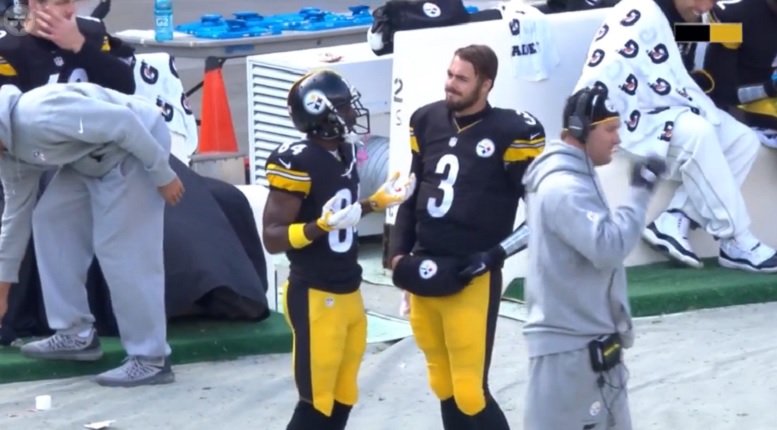 During Sundays win over the Arizona Cardinals, Pittsburgh Steelers wide receiver Antonio Brown appeared to be frustrated with quarterback Landry Jones, who had entered the game in the third quarter for an injured Mike Vick. After the game, head coach Mike Tomlin was asked about Brown and if he needs to talk to him about the number of catches and targets he’s getting right now.

“He realizes he’s seen everything he’s going to see in professional football, from an individual accolades standpoint,” said Tomlin. “He’s got to get a ring. That’s what he and I have been talking about through some of this. It’s uncomfortable for him, no doubt. He’s got a great rapport with Ben Roethlisberger. Ben’s not playing. What do we have to do to win the game? When you’re hunting what he’s hunting, his career will be defined by how many Lombardi’s he’s contributed to our stash.”

On Tuesday, Brown talked extensively to the media and he was asked about his actions in Sunday’s game.

“I can always remember what’s important,” said Brown. “Little things like my health, my facility, obviously the team, and I can’t get caught up with individual success. The team is doing great right now. We’re 4-2 and that’s more important than individual things.”

So, does it bother Brown that some fans are currently accusing him of being a selfish player following his recent comments last week and his actions on Sunday?

“There’s always going to be criticism when people are used to you being productive and scoring touchdowns,” said Brown. “But like I said, I know what’s important. I’m healthy, I’m available, the team is doing well, and those are the things that are most important.”

While Brown didn’t play a huge role in Sundays win over the Cardinals, he’s still proud of what Jones accomplished in the game.

“Well, that was really exciting, not only for us, but for Landry,” said Brown. “He was a leader in the huddle and I think that the gestures that I made, I don’t think he took negative. He was real positive all day and he was a commander, calling out the blitz, becoming aware of some things.

“He threw me a nice back-shoulder pass and obviously that wasn’t the play. He saw man coverage, was able to shoot me a signal, so he showed amazing growth, amazing poise and it was fun to be a part of.”

Brown was asked what he thinks he can offer Jones moving forward.

Brown currently has 40 receptions for 547 yards and two touchdowns through the first six games of the season. Since starter Ben Roethlisberger went down injured, however, he has maned just 11 catches for 111 yards and hasn’t scored.