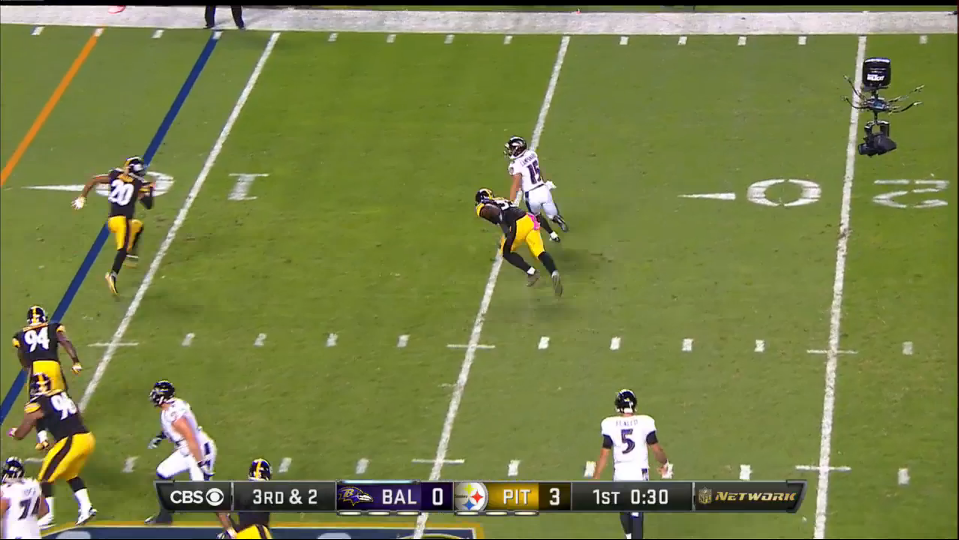 Might turn this missed tackles breakdown into a weekly report, as long as the Pittsburgh Steelers keep turning it into a weekly habit. I’ll say this for Sunday’s medley of missed tackles, they tended to come in bunches, with six coming on the Baltimore Ravens first scoring drive of the game.

The individual breakdown against the Ravens:

The most egregious missed tackles of the game came on the same play, Michael Campanaro’s end around for a touchdown after Moats and Allen whiffed badly in the open field.

Moats had Campanaro dead to rights and can’t make the stop. His issues in space have been on display since the preseason, as Moats missed Tavon Austin on an end-around last week as well. Until he proves he can stop it, teams will keep attacking him with it.

Allen is tied with Blake for the most missed tackled on the team this year with nine. This is a tough stop once Moats can’t keep the speedy receiver contained, but Allen’s overaggressive angle to the ball doesn’t help either.

The vast majority of missed tackles came in the run game, where Pittsburgh allowed Baltimore to rush for 191 yards and 4.9 yards per carry. Backside tackles were a reoccurring issue, as both Dupree and Blake are in position to contain this run, but neither can make the stop.

Dupree’s biggest issue is his target area and body velocity as a hitter. He nips at ankles and legs right now instead of driving through ball carriers with his stocky frame.

Blake consistently shows the same technique problems, as dropping his eyes and attempting to lower his shoulder rather than wrap up is a common one. That happens later, but on this play Blake really just whiffs. For a guy his size, this will happen, but it has occurred far too often this season.

Here’s Blake with an opportunity to make a huge 4th down stop on Ravens tight end Nick Boyle just short of the sticks. Instead the diminutive corner tries to deliver a knockout blow with his shoulder, which barely phases the big pass catcher.

For the season, here’s your missed tackle list per player:

Alas, Heyward did miss his first tackle of the season this Thursday. All good things must come to an end.

For the season that is 66 missed tackles for the Steelers in four games, including 27 by their starting secondary (Gay, Blake, Mitchell, Thomas). Timmons number may be a bit surprising, but he’s consistently missed stops in space. Mitchell’s number is encouraging, and reflects what I believe has been an elevated level of play this season.

66 missed stops at this point in the season is an average of 16.5 per game. That is far too high a number to continue if the Steelers want to build on their defensive progress this season.