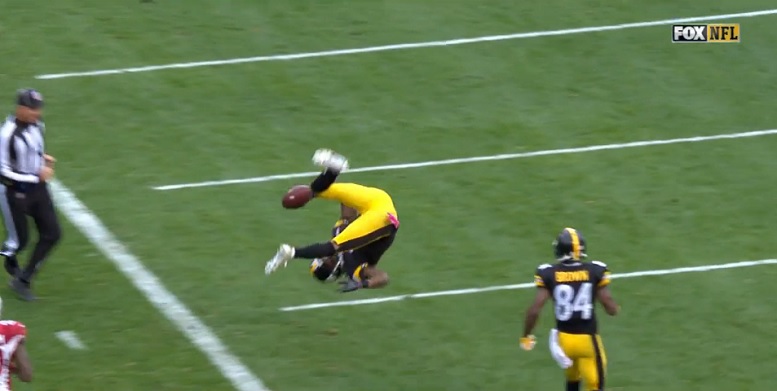 At the end of his long 88-yard touchdown Sunday against the Arizona Cardinals, Pittsburgh Steelers wide receiver Martavis Bryant decided to do a flip into the end zone. While the fans in attendance likely enjoyed the theatrics from the second-year Clemson product, starting quarterback Ben Roethlisberger apparently didn’t.

“I told him how proud I was of him to step up and make that big play,” Roethlisberger said, according to Ron Cook of the Pittsburgh Post-Gazette. “Then I told him, ‘Don’t ever flip in the end zone again or I’ll … nothing good is going to come from that.’ ”

Bryant, who had six catches for 137 yards and two touchdowns in his 2015 debut apparently told Cook that he received Roethlisberger’s message loud and clear.

“I’m not going to do that anymore,” he said, according to Cook.

As many of you probably remember, Steelers head coach Mike Tomlin is also not a fan of his players doing flips into the end zone. If anyone knows about that it’s former Steelers wide receiver Emmanuel Sanders, who is now with the Denver Broncos. Remember the Steelers game a few years ago against the New York Jets?

More than anything else, a player can suffer a serious injury by doing unnecessary flips and I’m sure that’s the point that Roethlisberger and Tomlin are trying to make. The team already has enough players on their Reserve/Injured list as it is. Do a dance instead, Martavis.