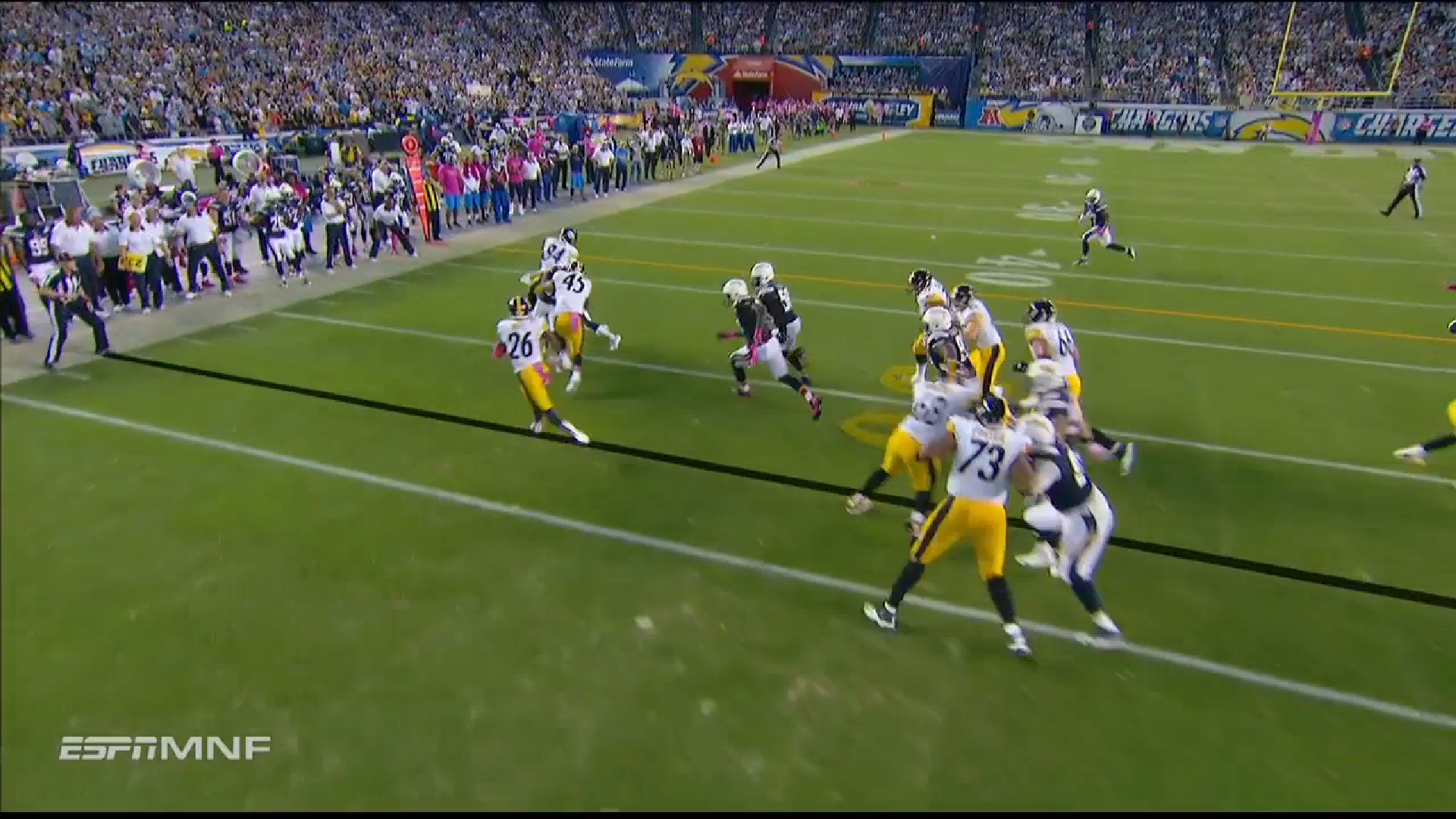 Earlier this week, we talked about first-year Pittsburgh Steelers fullback Roosevelt Nix and how he’s seemingly become a sort of personal favorite of head coach Mike Tomlin. He’s done so with his blue collar approach to the game and relentless hustle, which has already made him a standout on special teams.

Nix notched another special teams tackle on a second half punt, on which he had to get by a blocker in order to get the return man trying to reach the sideline. But he also got a decent blow on the offensive side of the ball, including a four-play sequence in the second quarter in which the Steelers ran the ball four straight times.

Coming onto the field after a two-yard pass on first down, Nix lined up at fullback behind the left tackle, serving as the lead blocker in driving linebacker Manti Te’o off the line of scrimmage, which helped Le’Veon Bell get to the perimeter for an eight-yard gain.

The Steelers ran out of the 22 on the following play, will all of the heavy run personnel aligned to the left side of the formation. Nix this time blocked to the edge against the outside linebacker, but lost the physical battle, getting out-leveraged and knocked to the ground. Still, the linebacker could only make a diving stab at Bell, who cut inside to pick up four yards.

Nix looked to head off to the sideline after that play, but was told to stay in. Pre-snap, he and Matt Spaeth both aligned off the left tackle before the tight end motioned to the right side and Nix moved into the backfield. Off the snap, the fullback buried his weight into the chest of the mike linebacker, though his hit came off-centered and the linebacker was eventually able to free himself, but not before Bell picked up nine yards.

The Steelers stayed in the 22 personnel, and this time Nix got out on the perimeter, driving the defensive back far off the ball, and ultimately into the ground, which helped Bell get out to the edge and escape for a 25-yard gain. Without Nix, Bell lost five and four yards on the next two plays.

The fullback re-emerged at the two-minute warning, this time aligned to the right side of the formation out of the 22 look. With a full head of steam, he got in a great initial punch on the left outside linebacker to help create a lane for Bell, who used that opening to slip through before the linebacker got free. Bell made it through to race up the field for a 32-yard gain.

Of course, the first-year bowling ball also featured on the last play of the game, at the goal line for Bell’s one-yard game-winning touchdown run out of the Wildcat. Nix got low trying to block the safety coming off the edge, but the safety got even lower. Bell leapt over the ensuing pile of bodies, however, and dove across the goal line for the score.

As the above sequence of plays shows, the young man is quite a load, and a lot to deal with under a full head of steam. There is a lot to work with from Nix as a lead blocker, but he still needs some fine tuning. He struggles to maintain his balance, especially when asked to attack from an angle, and as a result can fall off blocks. That’s something to work on, but Tomlin is obviously comfortable with his learning curve, or he wouldn’t be getting playing time.