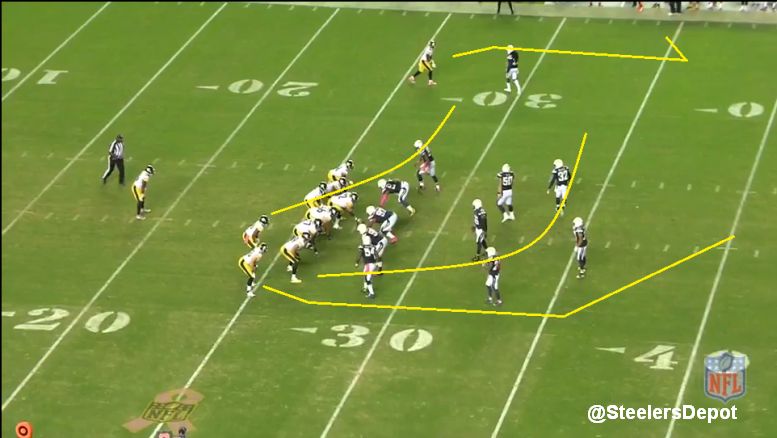 Back into the film room today breaking down one play the Pittsburgh Steelers ran in Monday night’s win over the San Diego Chargers. I chose it specifically because it’s a play we can trace back to Todd Haley’s time as the passing coordinator for the Dallas Cowboys in 2006.

The play itself isn’t spectacular – an incompletion to Matt Spaeth. There are no books called Progressive Passing Offenses by Matt Spaeth. But it’s still worth breaking down.

From the Cowboys playbook, this play is called Sprint 339 Naked RT. Here it is drawn up.

Of course, with left-handed Mike Vick running the offense, the play gets flipped to the left side. And we’re getting this shown out of 13 personnel instead of 12. Any good offense and offensive coordinator has to be able to run the same plays out of different formations and personnel groupings. Failure to do so creates true predictability, not the “run instead of pass, bubble screen” cliches normally associated with the term.

But the route concepts are all the same. Boot the quarterback. Have the backside tight end run a shallow cross with a tight/end fullback (in this case, Will Johnson) run into the shallow flat as a checkdown/pressure option.

To the boot side, we get a comeback route by the #1 receiver, with an outside stem off the line. To the backside, a post from #2, or in the case of Monday’s play, Heath Miller.

Let’s show it on the tape. 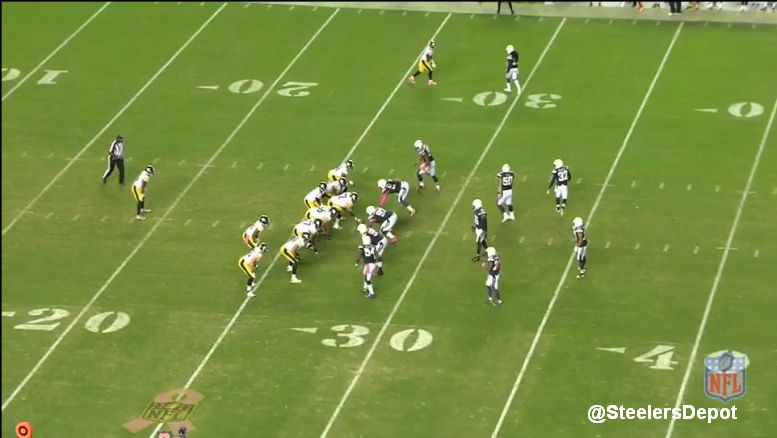 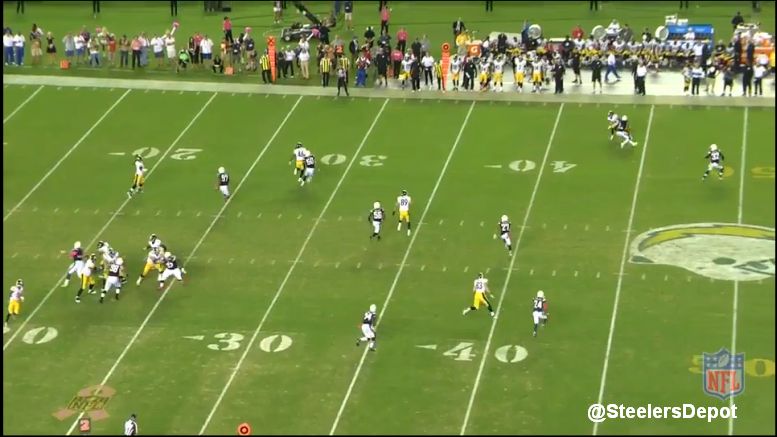 Vick has Spaeth with a step on the defender but can’t haul in the throw, perhaps a tad low from his quarterback (though you want the throw where only your target can get it).

The concept is sound though. Get Vick out of the pocket and on the move, something he’s extremely comfortable with in otherwise uncomfortable times. This isn’t simplifying or eliminating his reads but condensing them. Three routes, the flat, the cross, and the comeback, are all in his cone of vision. He only has to see half the field but gets 75% of his routes in view. For a player who has always struggled with his reads, it’s a huge help to him.

Something I hope to continue to see Sunday against the Arizona Cardinals.