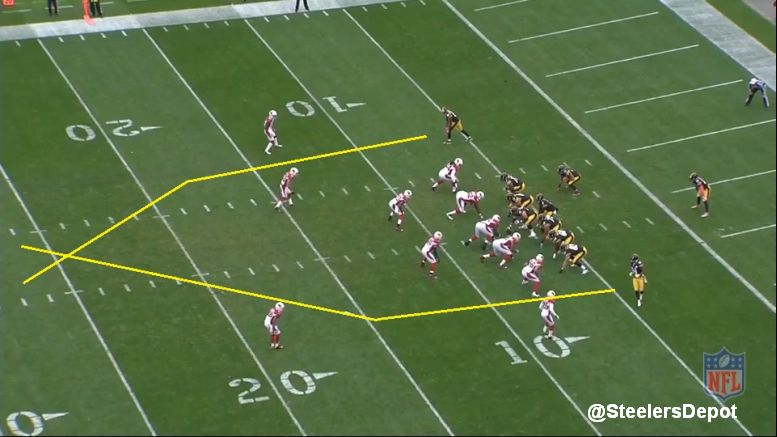 We’ll take a quick look at the Pittsburgh Steelers’ sack breakdown. A quick look because the team only gave up one. Let’s get to the film.

1. 1st and 10, 8:11 1st. Seven block, plus the running back check/releasing against a three man rush. The Steelers’ woes of giving up sacks when they have 2-3, and in this case, four more blockers than rushers continues.

It’s a two man vertical concept with Antonio Brown and Darrius Heyward-Bey running post routes that cross each other downfield. Vick’s initial read is Brown but it’s well-covered by the deep free safety and underneath strong safety. It actually leaves DHB open one-on-one with the cornerback but Vick doesn’t come off his first read. 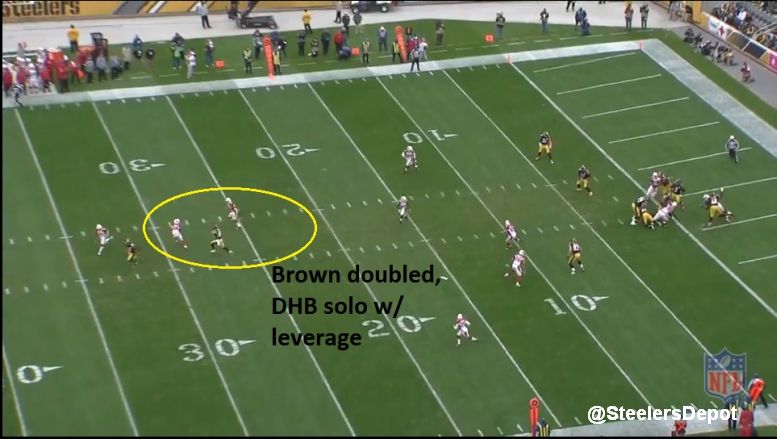 If Vick doesn’t believe anything is available downfield, he has to look to his checkdown. There is no complex read here. Either you get the vertical route open or you look underneath, knowing there is no blitz and you’ll at least have your back releasing. There aren’t any other options.

Le’Veon Bell is open in the flat for what would be at least a 5-7 yard gain. And one-on-one with space, Bell could easily pick up a chunk play. It’s first and ten, not 3rd and 15, so there is no compelling reason to stare downfield. Vick never gets off his read and winds up getting sacked.

It is only a three man rush, so seeing pressure after four seconds is disappointing, but it’s more than enough time for Vick to get off his first read. If he looks at either of his other two options, Heyward-Bey, or Bell, he can make a throw. Ball has to come out quicker than that, especially when you’re standing in your own end zone. 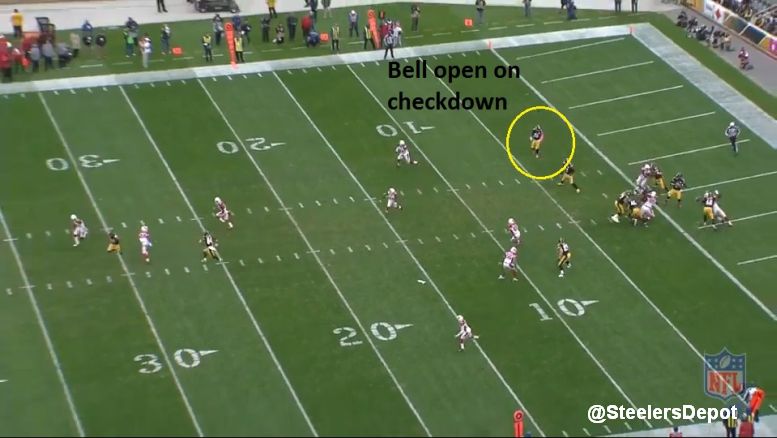 There were some things along the offensive eline that could have been cleaned up. Actually think Kelvin Beachum did a pretty good job here. Calais Campbell is a tough man to block solo and he seals him upfield. Had David DeCastro not allowed the interior pressure, Campbell isn’t touching Vick. Roosevelt Nix perhaps could have helped chip, instead of trying to triple-team the DT. whiffing and falling to the ground instead. They are minor issues though that detract from the bigger issue of Vick on the play.