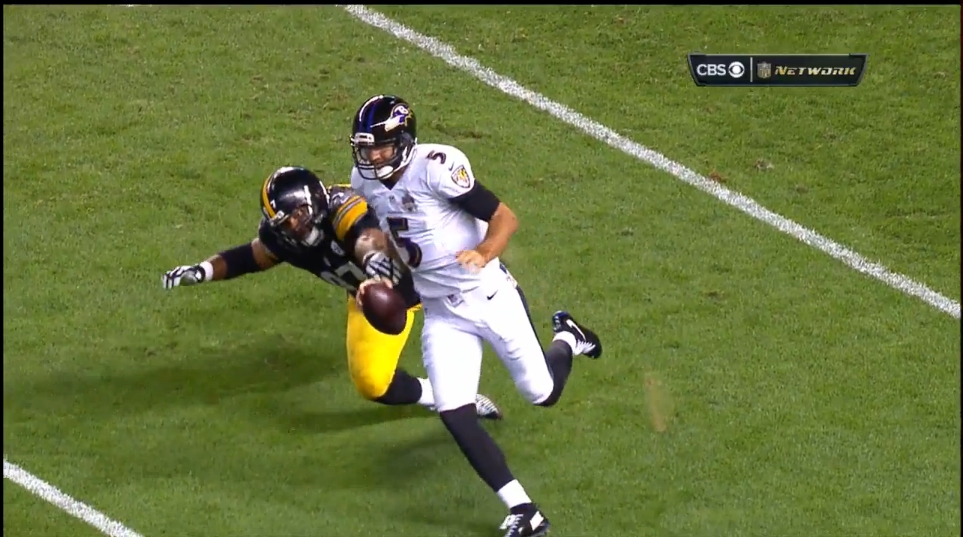 Outside of a poor showing against New England in Week 1, the Pittsburgh Steelers defense has battled hard with more success than expected through four games, currently ranked 7th in the NFL giving up just 18.8 points per game. The front seven has been particularly impressive (especially when Ryan Shazier is in the lineup), thanks largely to the team’s best defensive play, Cameron Heyward.

Heyward’s name may not get a lot of love in the national media. but he’s hands down one of the better defensive players in the league in my opinion. He has plenty of exceptional physical gifts, but his heart, motor, and leadership just accentuate those strengths even more.

Nothing exceptionally special or splash-like about this play, but I wanted to highlight it for technique and assignment-sound purposes. Heyward is responsible for the backside B-gap here, expertly using his right arm to hold the offensive tackle at bay, while keeping his inside arm free to make a potential tackle. If he utilizes both arms to fend off the block, Heyward will likely miss an opportunity to get a crucial stop.

Heyward controls his space perfectly, works his way down the line of scrimmage laterally, and makes a one-armed tackle. So many good traits on display here, but I love his awareness and form in battling blockers while still fulfilling his responsibilities.

I thought Baltimore had Heyward taken out of the next play, when an initial double team stymied his penetration step off the snap and sealed him inside. 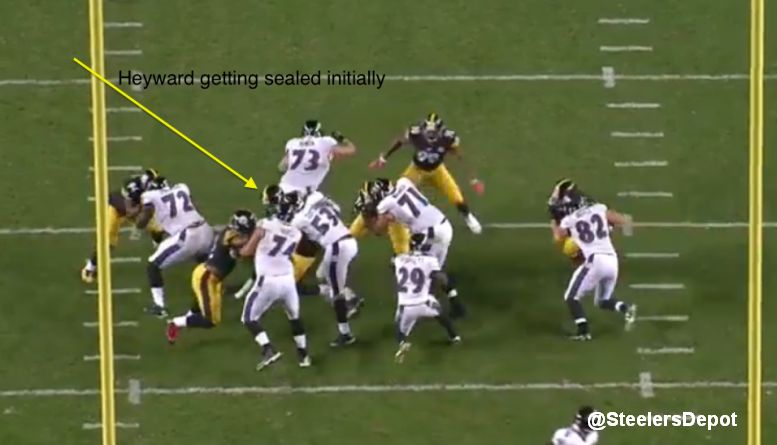 In the above image, the left guard has just reached the second level after chipping Heyward hard, leaving Ravens center Jeremy Zuttah to finish sealing Heyward on his own. Looks like the offensive lineman has won the battle right?

Instead, Heyward tosses Zuttah past him with a powerful club, somehow able to locate the football amidst the mess of blockers around him and make the stop. Tough to really coach that kind of power and fight on a play where most defensive linemen would have been toast.

One of the reasons Heyward almost never gets pushed around at the line of scrimmage is that he rarely loses the leverage battle. When facing a combo block at the beginning of this snap, Heyward could easily have been knocked back out of the play if he doesn’t anchor at the point of attack.

Of course, the trait that really sets Heyward apart is his motor, moving at an extraordinary work rate for a nearly 300-pound man. His hustle forced the Joe Flacco fumble to start the second half, chopping the ball from the quarterback’s hand after a full-board sprint to the sideline in pursuit.

That play is a huge reason why everyone on this defense respects Heyward, he’ll back up anything he says or does with his play and effort on the field.

Even in overtime, after watching Josh Scobee, Todd Haley, and Michael Vick screw up a sure victory, Heyward never stopped coming until the final whistle.

Wins the backside B-gap with such quickness that Heyward is able to get into the backfield and drop Justin Forsett for a three-yard loss on 1st down of the Ravens eventual game-winning drive. Huge play to start a pivotal possession, one that should have forced Baltimore into a tough third down if not for an assignment gaffe by another defender on the next play that allowed Forsett to pick up 12 yards.

Seriously though, James Hurst has zero chance on that reach block.

I mean, what? The quickness and awareness to locate the ball so quickly here is exceptional, as well as the shiftiness to knife through the A-gap and make a huge third-and-one stop with Vince Williams. The tackle forced Justin Tucker into a long field goal of 52 yards, which he of course made, but through no fault of Heyward’s.

The Steelers young defense will need Heyward’s leadership now more than ever, with San Diego, Arizona, and Kansas City next up on the docket. Can the defense rebound from a heart-breaking loss to Baltimore and continue to get better each week? Big questions for the defense’s heart and soul to lead them in answering next Monday night.