You would be hard-pressed to find many player backstories more compelling this season than that of 27-year-old first-year tackle Alejandro Villanueva, a decorated Army Ranger having served three tours of duties overseas before finally catching on with the Pittsburgh Steelers to make a 53-man roster.

But the honeymoon period for all of the warm and fuzzy feelings are over, as it’s now his job to serve as the primary blindside protector for Ben Roethlisberger for the rest of this season after the ACL injury suffered by Kelvin Beachum.

Villanueva was called into action for more than half of the Steelers’ 25-12 victory over the Cardinals, so it’s worth taking a hard look at how he performed, with the knowledge that he came off the bench cold, and had obviously not been practicing with the starters, as will have been the case when he makes his first career start on Sunday.

Villanueva’s first career snap as an offensive lineman came at the 12:24 mark in the second quarter on a second-and-13 pass play that would have been a completion if not for a well-timed hit on the receiver that forced him to drop the ball. He did not have any direct blocking assignment, but did well to look for work, chipping in on a double team with his left guard.

Mike Vick scrambled for 12 yards on the following play, just shy of a first, on the ensuing third down, and Villanueva did well to seal the end out of the play.

Midway through the quarter, the 6’9” lineman showed that size is not always an advantage when not properly wielded on a running play that went for four yards. Villanueva squared up against the linebacker, who got a good punch into his chest plate, sending the tackle stumbling backward as he joined the pile of tacklers.

Of course, size can at times be an advantage when technique fails. At the end of the quarter, Villanueva was beaten to the inside with a spin move, getting caught with his weight favoring the outside. He recovered, but overcompensated, as the rusher spun back outside, though Vick was never in danger of getting hit.

At the top of the third, Villanueva was outleveraged by the right end on a zone run to the offensive left side, gaining penetration that forced Le’Veon Bell to funnel back inside, where he was met by a pair of defenders for a loss.

A bit later in the quarter, Villanueva surrendered his only hit in the passing game, albeit on Landry Jones’ first touchdown pass. The edge rusher started up the arc, setting up the tackle for a spin back inside. He was unable to recover, and the outside linebacker got a shot in on Jones just after he released the ball.

An interesting two-play sequence ensued to start the drive midway through the third quarter. On first down, Villanueva showed in pass protection what he long reach can do to compensate for failure of execution, as he was able to extend in order to walk the rusher up the arc after essentially having gotten beat. A play later, he actually pulled to the right, hitting the A gap, though he was slow in getting there on a run that went for two yards.

Later in the drive, he was slow to pick up the rusher as a defensive back also came in on a run blitz. He stuck with the first man, but was not able to recover fast enough to lead him completely out of the play, which went for a loss of two.

Villanueva is still very much working through his technical skill set, but he is at times able to get by using his physical assets. At his height and weight, he has a certain physical advantage over many of the defenders that he faces, as evidence on a nine-yard run early in the fourth quarter.

In spite of the fact that he allowed the edge rusher’s arms into his chest, and was stood upright, he still generated enough power to freeze the defender to allow Bell to pass by unabated. 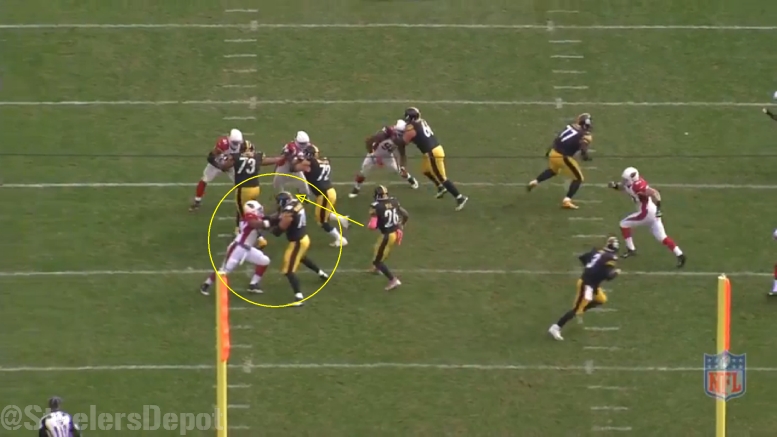 He was similarly successful employing a brawn over brains style on the following play, this a 23-yard pass. In spite of the edge rusher winning initially, Villanueva was able to call upon his size and strength to stalemate him, locking him up by the left shoulder.

Later on the same drive, Villanueva pulled once again, this time all the way around right guard, popping the linebacker and opening the lane for Bell to gain five yards. This at least tells me that the Steelers are not curtailing the playbook with him in the lineup. Perhaps, in fact, they will be able to add things tailored to his abilities.

On the first play of the Steelers’ final, two-play drive, the left tackle displayed perhaps the highest level of comfort and aggression on a running play that he had all game, working the end and turning him inside and off the line of scrimmage, albeit away from the action. This is the type of potential that he can reach once he is able to fully harness his technical skill set, in addition to his knowledge of the intricacies and varieties of the blocking schemes and defensive looks.

As said, the honeymoon is over, and we see some warts starting to show now against starting, regular-season competition. Villanueva will have a big test working against some of the best pass rushers in his first start next week, but as long as he is able to hold his own, there should be reason for encouragement about his future development.