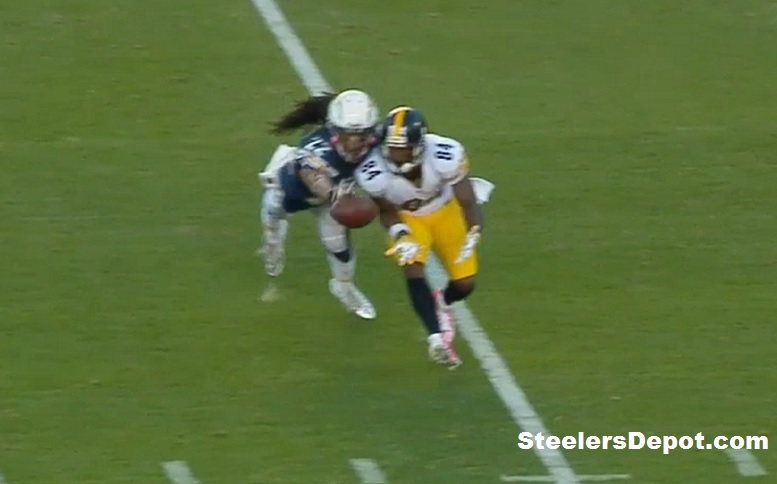 Nobody misses injured Pittsburgh Steelers quarterback Ben Roethlisberger more than wide receiver Antonio Brown. During the last two games with backup Mike Vick under center, Brown has registered just 8 catches for 87 yards and zero touchdowns on 15 targets. That’s normally one poor game for him when Roethlisberger is playing.

On Wednesday, Brown talked to the media after practice and he started things off by giving his thoughts on his lack of involvement in the passing game in Monday night’s win over the San Diego Chargers.

“I didn’t think I got the ball enough, but I always got to stay positive,” said Brown in the audio of the interview that was aired on 93.7 The Fan. “Obviously, my guy’s not at quarterback, so with Mike Vick out there, I just think that he’s playing conservative to make sure that we get the win and he’s not going to take too many shots or try to do the extra. He’s going to stick to the script and do the best he can.”

So, would Brown like see the coaches turn Vick loose a little bit more in the passing game moving forward?

“I don’t know, man, as long as we win,” said Brown. “That’s all that it’s about. You know, obviously I want to get the ball and help the team win and that’s always my passion, but some things are out of my control. All I can do is go out there and play the game the ways it’s supposed to be played.”

Is Brown getting frustrated right now?

“Just stay positive,” said Brown. “It’s a long season. I’m still up there on those [receiving stat] charts, just got to find a way to win. Our business is winning, the rest of the stuff will take care of itself.”

So why does Brown think he’s not getting the ball more, or just as much as he was before Roethlisberger went down injured?

Brown was asked if he thinks that will change moving forward and especially after the last two drives in Monday night’s win over the Chargers.

“I don’t know,” said Brown. “I know he’s not saying not to throw me the ball, I’m sure that he wants to get me the ball and I’m sure that he’s just going through his progressions and trying to do the positive thing to help us get in a good position.”

Brown was asked if Vick needs to try to get him the ball on plays even when it looks like he’s tightly covered.

“He’s got to take some shots,” said Brown. “Trust me a little bit, let me make some plays and let’s get a victory.”

Brown was later asked if that was the most single coverage that he’s seen against him Monday night against the Chargers.

“I think on some certain third downs they kind of had a little safety help, but on the earlier downs, it was a lot of single one-on-one and that’s what we got to try to exploit.”

At the end of his talk with the media, Brown wrapped everything up in a bow and he didn’t make it sound like he has a real beef with Vick.

“I think he wants to get me the ball,” said Brown. “I don’t think he’s not trying to get me the ball, it’s just he’s new out there. He hasn’t been here throughout the spring or training camp, so he’s just trying to do what’s right just to put the team in position to make sure he don’t mess up.”

While I do believe that Vick needs to start throwing the ball down the field more and potentially including Brown more in the passing game, he doesn’t need to feel like he has to force his passes if they’re not there. Vick has already escaped the last two games with just one interception even though he probably should have four or five more right now.

In his first two starts, Vick has made some horrible throws and he’s looked very timid in his decision making process as well. During those last two drives against the Chargers, however, Vick did appear to “turn it loose” a little bit more and overall the results were good.

As far as Brown goes, everyone knows that he’s frustrated. The last thing that he needs to become is a cancer because he’s not getting the football. I’m not accusing him of being a cancer, mind you, but his attitude is worth watching closely moving forward. Like Brown said, the most important thing right now is that the team stacks wins until Roethlisberger returns.

Brown seems to have a good relationship with Vick and I’m sure the things that he said on Wednesday are things that the two players have probably discussed with one another.

So far this season, Brown has caught a total of 37 passes for 523 yards and two touchdowns.