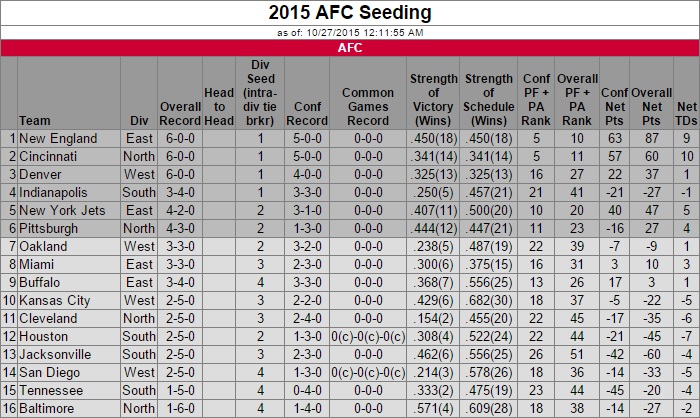 Three teams in the AFC North played in Week 7 and all three of them lost.

On Sunday, the Cleveland Browns joined the Pittsburgh Steelers at the losers table with their 24-6 road loss to the St. Louis Rams even though they compiled 364 net yards of offense.

Browns quarterback Josh McCown completed 26-of-32 pass attempts for 270 yards against the Rams defense. However, he failed to get his offense in the end zone and was sacked four times. McCown was knocked out of the game with a shoulder injury with a little more than 5 minutes to play in the fourth quarter and Johnny Manziel was forced to finish.

While the Browns defense only allowed 163 passing yards in the game, they couldn’t stop Rams rookie running back Todd Gurley, who rushed for 128 yards and two touchdowns on just 19 carries.

The Browns loss dropped them to 2-5 on the season and they’ll now get ready to host the Arizona Cardinals in Week 8.

On Monday night, the Baltimore Ravens fell to 1-6 with their 26-18 road loss to the Cardinals.

Ravens quarterback Joe Flacco completed 26-of-40 passes in the game for 252 yards and a touchdown. However, his lone interception in the game, came on the Cardinals 9-yard-line with 13 seconds left in the game. Had the Ravens managed to score they would have needed a two point conversion in order to send the game into overtime.

The Ravens finished the game with 55 yards rushing while the Cardinals registered 150 yards on the ground. Cardinals quarterback Carson Palmer threw for 275 yards and two touchdowns in the win and wide receiver John Brown caught 4 passes for 65 yards and a touchdown.

The Cardinals defense was also able to sack Flacco three times in the game.

The Ravens will be back home in Week 8 and they’ll play the 2-5 San Diego Chargers.

In other Week 8 AFC North action, the 4-3 Steelers will host the 6-0 Cincinnati Bengals on Sunday at Heinz Field. The Bengals are coming off of a bye while the Steelers are looking to get injured starting quarterback Ben Roethlisberger back after his four-game absence due to a left MCL sprain.