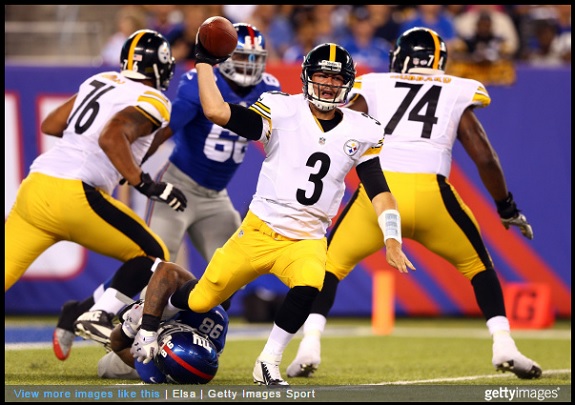 With Ben Roethlisberger sidelined four to six weeks, the Pittsburgh Steelers are now carrying only two healthy quarterbacks on the entire roster. And Mike Tomlin does not plan to add another body to that group.

When asked directly if he would add another arm, he replied he didn’t “anticipate it at this juncture.”

It leaves Landry Jones as the backup to Michael Vick. Tomlin said he was comfortable with Jones being the #2.

“I do. If I didn’t, I wouldn’t have kept him on this football team,” he responded when asked if he felt if Jones was “ready” to be the top backup.

Of course, Tomlin had the chance to anoint Jones as the #2 following Bruce Gradkowski’s season ending hand injury. He chose not to, opting to sign Vick instead.

I promise I won’t write a “Turning to Jones Doesn’t End Steelers’ Season” article if Jones is forced to see any significant time. If he starts, you run as far away as you can. However, it’s not like Tomlin has much of a choice. The “best” quarterback options on the waiver wire are Christian Ponder and Ryan Lindley. With Tyler Murphy on the practice squad, it’s viable he can act as the scout team QB and the third arm.