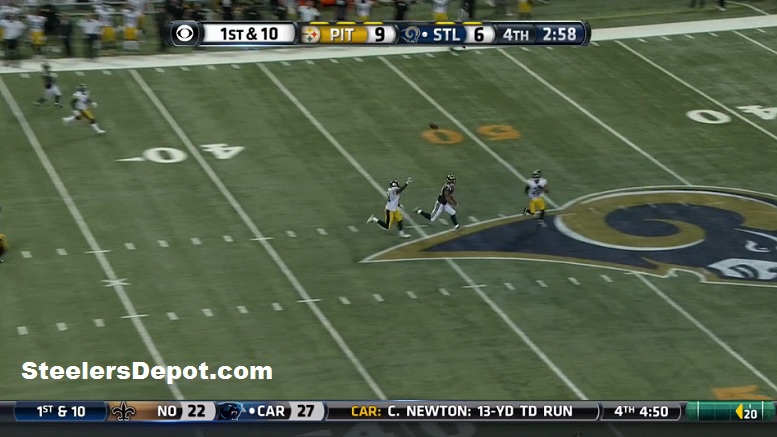 Pittsburgh Steelers safety Will Allen has been around the league a long time and while he’s not the fastest or most athletic player, he certainly makes up for that with his smarts.

Sunday, in the win over the St. Louis Rams, Allen picked off a deep pass from Rams quarterback Nick Foles intended for tight end Lance Kendricks with 3:02 left in regulation and it ended up being a huge turning point in the game.

After the game, Allen talked about what he saw on that particular play and what ultimately led to the interception.

“I just recognized the formation and the coaches called a great call,” said Allen. “Lawrence Timmons did a great job of causing some flight time for me, causing a high throw and I was just over there to make the play. Right place, right time doing my job.”

Below is a good aerial shot of the play and as you can see, while the Steelers only have one deep safety back in Allen, the coverage is more of a cover-2 look as cornerback William Gay is playing the deep half on the week side with outside linebacker Bud Dupree dropping underneath to help out.

As Allen pointed out after the game, Timmons did a great job on the play of running with Kendricks down the middle of the field and this led to Foles having to put more air underneath the ball. It was too much air, however, and Allen was there for the interception.

So, did Allen indeed recognize this formation and play from earlier in the game? I say, yes.

With 13:00 left to go in the third quarter, the Rams appear to have run the same identical play against the Steelers. In fact, it looks as if the Steelers ran the same strong-side fire zone blitz on that play only this time it was Allen coming off of the edge instead of fellow safety Mike Mitchell.

While the all-22 shot will likely show it better, Timmons didn’t look like he stayed as close to Kendricks as he did on the play later in the game. As soon as that view is released, I will update this post with that angle.

Allen and the rest of the Steelers coaching staff probably took a good look at the first play on the sidelines in case the Rams came back to it. They obviously did and both Timmons and Allen were ready for it.