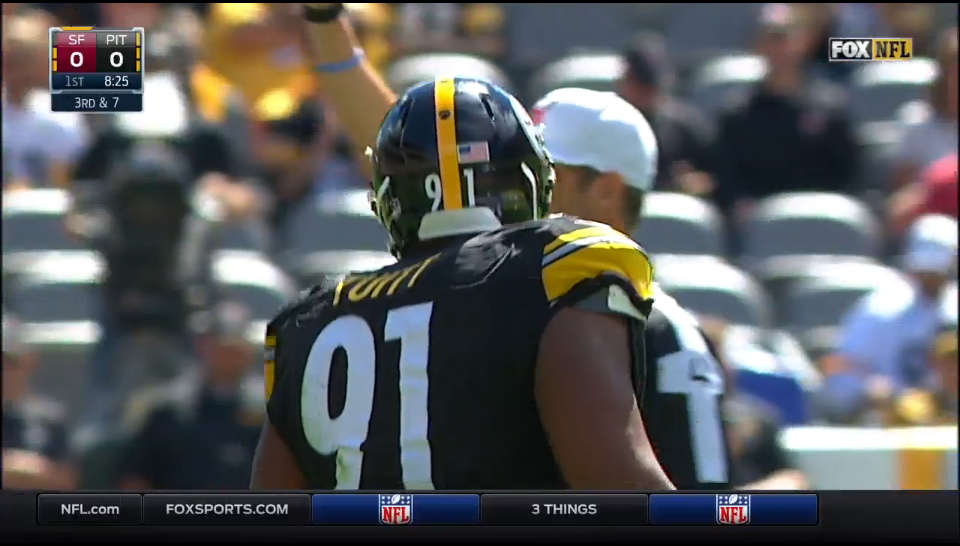 In a game where several Pittsburgh Steelers stood out for remarkable performances, perhaps only Ryan Shazier was more impressive than defensive end Stephon Tuitt on Sunday. The second-year defensive end was relentless in dominating the 49ers offensive front in a variety of ways, both as a pass rusher and as a run defender.

Tuitt has always had great natural tools, but now he’s combining those with techniques and well-enhanced pass rush moves. He showed off his trademark swim move during the 49ers opening series, making Jordan Devey look silly in pass protection.

Tuitt notched another half a sack later on an untouched rush off the right side, but he was constantly harassing Colin Kaepernick in the pocket all day. On the last play of the first quarter, Tuitt kept battling his way through Devey’s block to get a hit on Kaepernick.

Great quickness and technique to attack the blocker’s shoulder rather than just battle head-on to a stalemate as Tuitt did too often last year. Pick a lane and exploit it.

Bending the edge will never be something Tuitt is asked to do a lot as a 3-4 defensive end, but it is pretty nice to know you’ve got that kind of an athlete at 6’5, 305 pounds. Tuitt beats Erik Pears around the edge to force Kaepernick to step up in the pocket, nearly nipping his ankle for another sack thanks to a diving tackle attempt.

I love how much quicker and more powerful Tuitt is with his punch this season. Shoots his hands inside here against Devey and gets the guard overextended trying to land his own punch. Easily maneuvers around the off-balance offensive lineman to pressure the quarterback.

If Tuitt was unblockable as a pass rusher, the story didn’t change much when evaluating him as a run defender. Simply too quick and powerful here, discarding Pears block to help make a huge 3rd-and-goal stop late in the third quarter.

That swim move is nasty kids, and it isn’t going anywhere.

Earlier in the game the Steelers only had ten defenders on the field, but Tuitt saved the day by blowing up this run anyway from a nose tackle position.

Great quickness and vision to locate the ball quickly and win with his first step. One of the biggest weaknesses in Tuitt’s game remains his get-off timing, but this play shows how dominant he can be if he can become more consistent at being the first player off the ball.

Tuitt misses the tackle here, but only after violently clubbing Pears to the ground at the point of attack.

That’s just exceptional quickness in his initial movement, and in his closing speed to the ball carrier.

I have six or seven more GIFs of Tuitt’s dominance written down in my notepad, but suffice to say the 49ers were absolutely no match for he or Cameron Heyward on Sunday. Heyward said it this offseason when talking to the media about his young teammate, but consistency will continue to be the most important element to Tuitt’s game this season. His talent and technique are well-developed at this point, and he’s growing more and more confident and physical each game. The ceiling for the Notre Dame product is frightening, as San Francisco found out firsthand on Sunday afternoon.