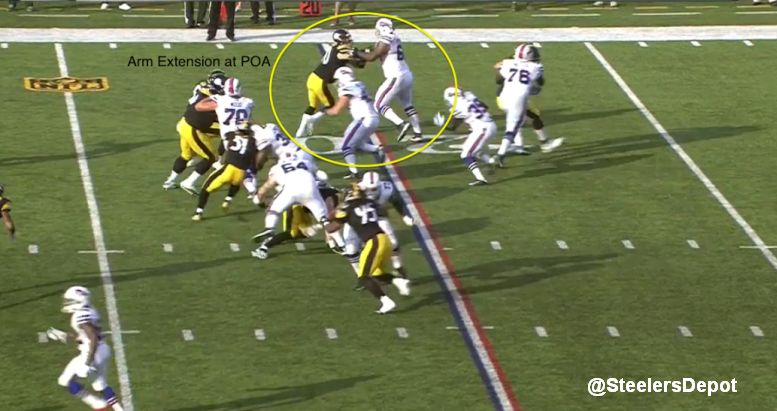 Last week I made the case for the Pittsburgh Steelers to increase reps for Anthony Chickillo against better competition, a request which was granted this past weekend when the Miami product faced off – for at least a few plays – against the Buffalo Bills starting offensive line. In the interest of analyzing his performance, I went back to the tape and came away with several strong impressions, some positive and others negative.

One of the things I like the most about Chickillo is that he doesn’t get swallowed up and bullied as a run defender, thanks to his functional strength and excellent arm extension when taking on blockers. It is so hard to get into Chickillo’s frame because he almost always initiates contact with a powerful punch into his opponent’s chest.

Great example of that came on Chickillo’s first snap, when he set a hard edge against Buffalo offensive tackle Seantrel Henderson. Henderson is a long lineman, with an incredible reach of almost 35 inches. His length was a great test for Chickillo, but here the outside linebacker plays it perfectly, keeping outside leverage and forcing the run back inside where his help is. I’d like to see him get off the block a little bit quicker to help out with the tackle, but for a rookie, this is fantastic assignment-sound play. Henderson also grabs Chickillo’s facemask as the back runs by, making it harder for the linebacker to disengage.

Couple snaps later Chickillo showed off the same edge prowess, this time when facing Henderson pulling from his right tackle spot to clear a path for Bronson Hill.

See the ground Chickillo gains as soon as he realizes where the pitch is going? As an edge defender you don’t want to get upfield so much that you run yourself out of the play, but you do want to set a hard boundary to keep the runner from getting outside. Chickillo’s positioning is again perfect. He does get knocked back initially by the length and power of Henderson, but he fights back to hold his own. Chickillo is still working on disengaging quickly from blockers, which was an issue for him in Miami too. Technique-wise though, this is a thing of beauty.

Chickillo isn’t the most instinctive player, but he does have strong read-and-diagnose ability and isn’t faked out very often. Reads this play quickly, discards the fullback’s block easily, helps make the tackle for loss.

While his run defense has proven to be solid this preseason, Chickillo still needs development as a pass rusher, as expected.

Try to ignore Matt Conrath getting bullied inside and losing his containment on the pocket here, and focus on Chickillo. Good hand usage at the top of the arc to try and swat Henderson’s mitts down, but the motion isn’t precise or powerful enough to phase the big offensive tackle. Chickillo tries to bend the edge to the passer, and against a smaller offensive linemen this might work, but Henderson uses those long arms to shove him up the arc and out of the play.

Chickillo doesn’t have that elite level bend around the corner to really wreak havoc, but he’s athletic enough to win the edge if the tackle doesn’t move his feet. He forces Tyrod Taylor to step up in the pocket here, but because Conrath loses contain, the quarterback scampers for a score. While I like Chickillo’s mindset here, longer, more athletic offensive tackles can definitely given him issues until he gains a more advanced repertoire as an edge rusher.

In closely examining his last two games, I really wish Chickillo had more of a finishing burst to the quarterback. He works hard to get into position for sacks however, and does show consistently active hands in passing lanes. Here’s two examples of what I mean.

3rd-and-4, just under nine minutes left in the game, big down for the Steelers defense to get off the field. Chickillo’s get-off is excellent as usual, he shows active hands to keep the tackle’s punch from landing, starts to win the edge, then just can’t quite flatten to the quarterback in time. Seems to be missing that little bit of agility to stop on a dime and turn the corner to the passer. Offensive tackle does a nice job to stick with him just enough here, but I’d love to see a closing burst to finish the job by Chickillo.

Part of the reason Chickillo’s edge rushing game is still so unrefined, is that he played a lot of inside techniques at Miami, so he wasn’t on an island with a blocker very often. Because of that however, his hand usage and power as a bull rusher is excellent when meeting guys head on.

Here he comes as the looper on a twist, and is able to knock the center back to collapse the pocket some. Chickillo also gets his hands up in the throwing lane, although Matt Simms still completes the tough throw to the sideline. Miami ran a lot of stunts and twists with their front seven defenders, and although Chickillo was typically the crasher and not the looper in college, he understands and executes these concepts very well.

To be fair, Buffalo quarterbacks were getting the ball out so quickly (credit to them) because of how wide open receivers were down the field, that it made it very difficult to evaluate pass rushers in the second half. That said, I don’t think bending the edge to the quarterback is ever going to be Chickillo’s go-to move, something I noted last week. Still, the ability to keep offensive tackles honest is crucial, as it will open up counters and other maneuvers for Chickillo in the future.

It was Chickillo’s first reps against real competition, and although he didn’t do anything spectacular, he was clearly able to hold his own and play fundamentally sound football. When Chickillo’s out there, you aren’t worried about him getting bullied or pushed around, or looking lost on the field. That’s really nice to be able to trust a young guy. But he’ll need to continue to master the nuances of becoming an edge rusher in the NFL before he’s given substantial playing time. While an all around game is vital to long term NFL success, the ability to rush the passer is still king.