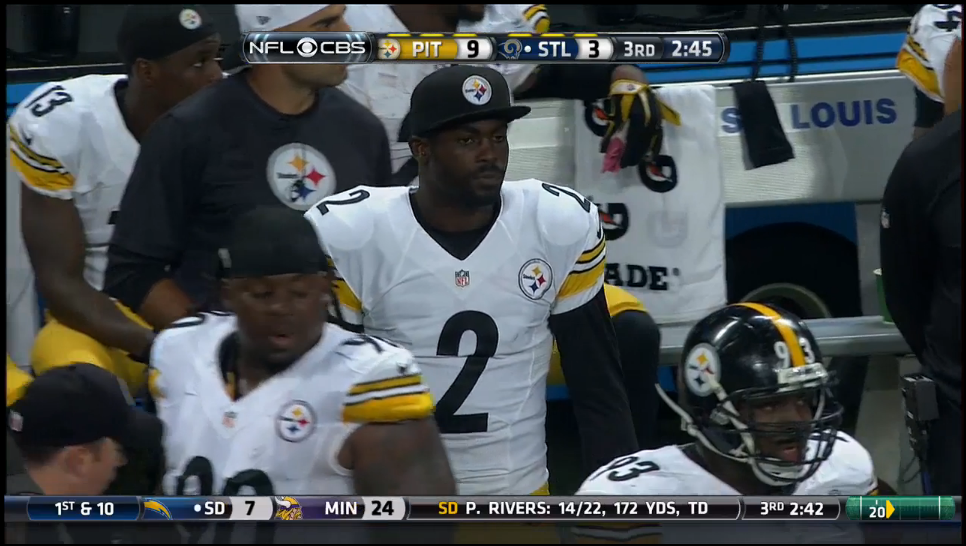 When Ben Roethlisberger went down with what appeared to be a serious knee injury on Sunday in the third quarter, every Steeler fan’s heart was officially jumping out of their chest. An MRI revealed an MCL sprain and a bone bruise, bad enough that the Steelers quarterback will miss at least 4-6 weeks, but not a season-ending blow as originally feared.

Still, even at 2-1 the Steelers can’t afford to fall off much with Roethlisberger out of the lineup until possibly Week 10 against Cleveland. The slate of games to finish the season is brutal (Weeks 12-16: @SEA, IND, @CIN, DEN, @BAL), meaning the Steelers may need to go at least 3-3 over their next six games in order to contend for a playoff spot.

The team is talented enough to get the job done, especially against a mildly favorable slate of opponents (compared to the end of the season anyway), but Michael Vick is going to need to play much better if the team has any hope of being in the playoff picture when Roethlisberger returns.

Vick started off strong against St. Louis, lofting a nice touch pass for Le’Veon Bell to elevate and grab for a 20-yard gain on 1st down. Very simple play, but love the fact that Vick recognized the mismatch (Bell had been whipping Alec Ogletree all day in coverage) and gave his guy a chance to make a play.

From there it was all downhill for Vick, fumbling two plays later while carelessly holding the football with pressure coming in his face.

Sure the offensive line shouldn’t allow that interior pressure to happen, but Vick shows poor pocket presence by not tucking the ball away at all here. Two of my biggest knocks on Vick are his ball security and his pocket awareness, negative traits that have haunted him throughout his career. With the Steelers clinging to a 9-3 lead at their own 30-yard line, ball security should have been Vick’s #1 objective.

Very next play, Vick scrambles from a perfectly clean pocket and gives an easy pursuit angle to the previously blocked Robert Quinn.

Vick has always had issues hanging in the pocket, consistently getting happy feet and scrambling without reason, destroying the structure of the play. Darrius Heyward-Bey is wide open for what should have been a huge first down, but Vick abandons the pocket and the play early, and never sees him.

To make matters worse, Vick again fumbles the football as he’s hit going out of bounds, holding it like a loaf of bread. Very fortunate the ball flew out of play.

Next drive, Steelers facing a 3rd-and-two, Vick made perhaps his most egregious error of the day, one the #Steelers were incredibly fortunate to escape.

Lamarcus Joyner does an exceptional job reading and reacting to this route by Antonio Brown, but there is no way Vick can make this throw. I know that Brown is consistently open and as a quarterback you’re looking for him on third down, but it is just not there on this play. Vick locks on to him and tries to force a throw that has zero chance. Incredibly lucky that Joyner dropped the easy interception.

This is simply not the type of play you want from your backup quarterback while trying to protect a 9-3 lead and possessing the ball on your own 37-yard line with ten minutes left in the game. Had the Rams been able to capitalize on any of Vick’s potential turnovers, the game could have turned quickly in their favor.

Vick’s last error was a big one as well, as the Steelers had a chance to run the clock out if they could just pick up one first down. Clean pocket for Vick with plenty of time to set and throw, yet the veteran quarterback’s pass is well-behind Heyward-Bey on 3rd-and-nine, making the receiver turn all the way around to make the catch.

Because DHB has to make such a significant adjustment to snag the pass, his upfield momentum is halted, allowing the defenders an extra second to race up and stop him short of the sticks. If the location of Vick’s throw is out ahead of the receiver, Heyward-Bey picks up the first down with ease, and Pittsburgh can simply run the clock out with kneel downs. Instead St. Louis got the ball back with just under two minutes left down six, giving them a chance to win the game.

Tough situation for a backup quarterback to enter a tight game on the road, but the best backups prepare like starters all week long. I won’t speak to Vick’s level of preparation, but when given the opportunity to protect the lead and secure the victory, Vick played about as poorly as he could have.

While dropping back to pass eight times, Vick nearly turned the ball over on three occasions, all in Steelers territory. Pittsburgh was fortunate to escape St. Louis despite Vick’s play, but the team can’t expect to be so lucky moving forward, especially against a desperate Baltimore team this Thursday. Vick will need to be much better than he was on Sunday if Pittsburgh wants to be even remotely successful while Roethlisberger recovers.