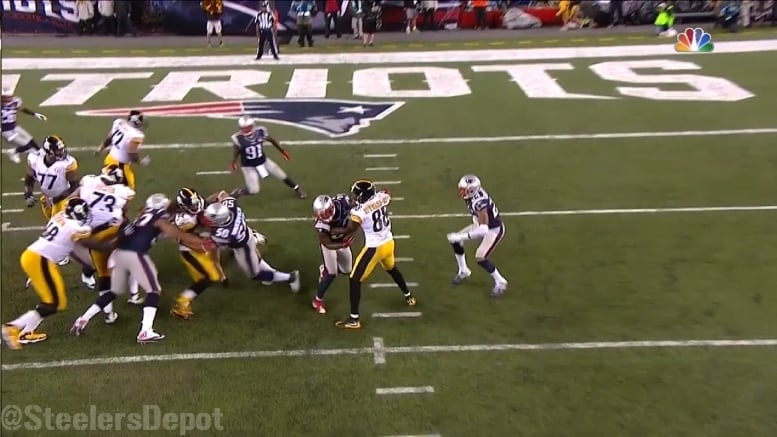 The Pittsburgh Steelers and fourth-year veteran left tackle Kelvin Beachum were not able to agree to terms on a new contract before the start of the regular season as the former seventh-round pick heads in to a contract year, after which he will inevitably want to test the open market.

But he did not put out his best game tape on opening night for potential suitors, being flagged for three different sorts of penalties, giving up a sack and other pressures, and getting beat for a couple of negative running plays against the Patriots.

The Steelers’ first negative non-gadget play of the night occurred on the second snap of their second drive in the first quarter, and is directly attributed to Beachum getting beat by Chandler Jones one-on-one.

On what appears to be a weak-side inside zone run, Beachum allowed Jones to beat him inside, with the end athletic enough to grab onto DeAngelo Williams and hold on as the back tried to jump cut out of the way.

Two plays later on the same drive, Beachum was flagged for an illegal formation penalty as he was caught setting too far off the line, perhaps in response to his earlier issues with Jones. In spite of the flag, Beachum was beaten again by Jones on the play, who nearly made the tackle for a loss. Instead, the Patriots merely got the five-yard penalty.

Beachum was able to settle down for much of the middle part of the game, but he did not have a very clean second half, starting late in the third quarter. Though the offense was successful on the occasion, connecting on a 26-yard pass, Ben Roethlisberger took a shot from Jones when Beachum failed to hold him after being passed on to him from left guard

Later in the drive, on first and goal, Beachum struggled with Jabaal Sheard, who was able to shed his block and make the assist on a run stop for a short gain. The still below shows the left tackle after allowing the end to get in on a play that he should not have been in a position to make.

Later in the series, of course, Beachum was successfully baited into a false start by a defensive line shift as the Steelers faced third and goal from just inches away. The result was a third down from outside the five-yard line, a draw on which Jones, lined across from Beachum, made the tackle for a loss after scraping down the formation.

It only got worse on the Steelers’ final possession, though the game was already nearly out of hand, down 14 with three minutes to play. On the very first play of the final series, Beachum was bull rushed back into the pocket by Rob Ninkovich, forcing Roethlisberger to flee the pocket.

Roethlisberger ultimately tripped over Beachum’s foot because he was pushed back so far, but he eventually scrambled and threw an incomplete pass to his tight end, likely just to stop the clock.

Later in the drive, the left tackle was flagged for an illegal hands to the face penalty against Sheard. This play was widely discussed, largely due to Beachum’s incredulity following the call, but it was a fair one to make.

The two were the only players in that area of the field when Beachum’s jab made contact with Sheard’s helmet, beginning to loosen it from his head. The blow forced Sheard to take a false step with his inside foot, tripping as his helmet came off. Below is a still of the first contact, with nobody else in the vicinity, and before Sheard tripped, to dispel two narratives about the incident. 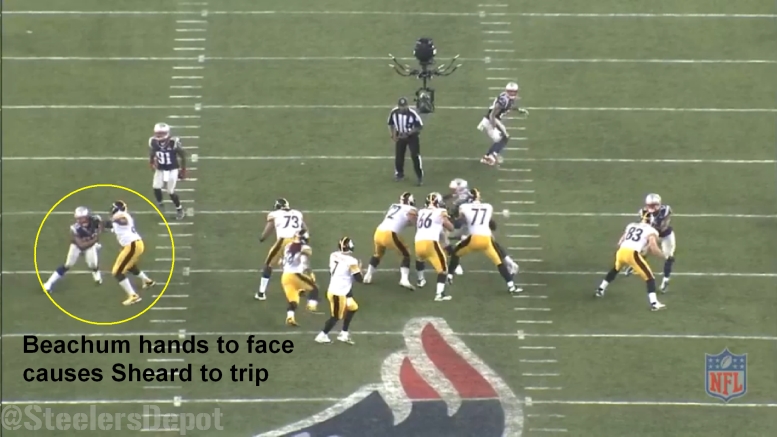 Beachum may have allowed his frustrations get the best of him, because he gave up a sack to Sheard on the next play, an ugly result against a three-man rush. Sheard was able to get his hands in Beachum’s chest and knock his hands down to slip to the outside. Even with Roethlisberger dead to rights, he still didn’t go down easy.

As much as Beachum’s detractors will want to use his as fuel to drive their narratives that the undersized tackle is not worth any kind of contract extension, I hasten to add that this was a very atypical performance from Beachum, particularly in pass protection, and I hardly expect it to be indicative of how he will play this season.