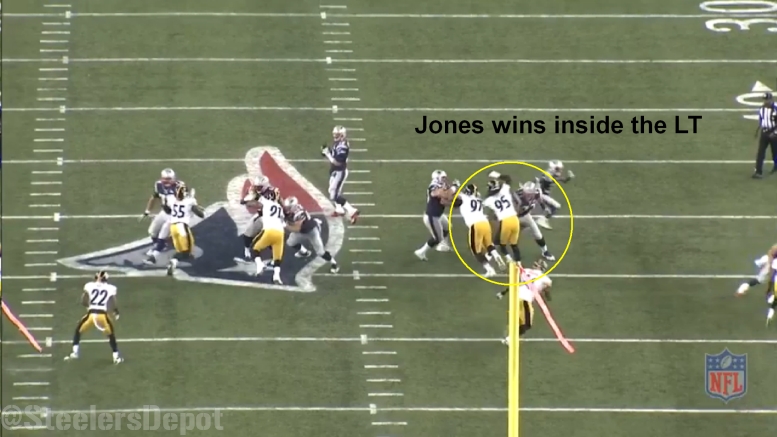 No individual players on the Pittsburgh Steelers roster is facing greater scrutiny than third-year outside linebacker Jarvis Jones, the former first-round pick who has been heavily criticized followed his first two seasons of play.

The Steelers just drafted another outside linebacker in the first round, and are using a rotation at both the left and right side, which they certainly would not do if Jones was demanding to be on the field every snap with his play. As such, he only saw a couple dozen or so snaps on opening night.

While he still showed some of the same faults that have been on tape since college, he did on a few occasions flash the appearance of improvement in certain areas of weakness in his game, including functional strength and athleticism around the edge as a pass rusher.

Perhaps some of this had to do with the Patriots’ left tackle, Nate Solder, who did not exactly look like the recipient of a big new contract, even if he did not give up a sack. On the Steelers’ first snap on defense, Jones showed a bit of both traits, using strength to get up the field against Solder and showing a bit of athleticism to turn the corner, even if the pass left the hands of the quarterback too quickly to do anything about it.

It was just two plays later, however, that Jones dropped in coverage and whiffed on a tackle attempt on the running back near the sideline, which helped turn an eight-yard pass into a 13-yard gain and a first down.

He did follow it up by swimming inside on Solder on the next snap, but the left guard was able to fill the gap by leveraging the end against Jones, who wound up losing his footing in the process after his progress was impeded. I do like that he showed the inside move, however, and that it could have worked.

In the second quarter, on the penultimate play of the Patriots’ first scoring drive, Jones showed a lot of what many have been waiting on him to demonstrate, which was the ability to bend in order to turn the corner on the pass rush.

For me, the result of this play is inconsequential, because what we see here has potential ramifications that are larger than one play. If Jones can actually make strides in getting low and turning the corner, then he is that much closer to reaching some kind of potential as a pass rusher, rather than simply being run up the arc. He got to the quarterback, but the quick throw—aided by some defensive confusion in the back end—led to a 19-yard gain.

Jones also showed clear power in the running game, jarring Solder with a two-arm punch on the Patriots’ next possession. The left tackle stumbled back, opening the backfield for the outside linebacker, who was able to cut in to make the tackle for no gain.

Equally significant was his display of a quality bull rush on the next snap, driving Solder into the quarterback’s lap, but you’re simply limited with what you can do when the ball is out in under two seconds.

As has been, and perhaps always will be the case, there were plays that Jones didn’t make on a down-to-down basis, but I would contend that the bigger takeaway from this game is the potential of the things Jones showed here that he hasn’t previously. It will be important to see a repeat performance next week.