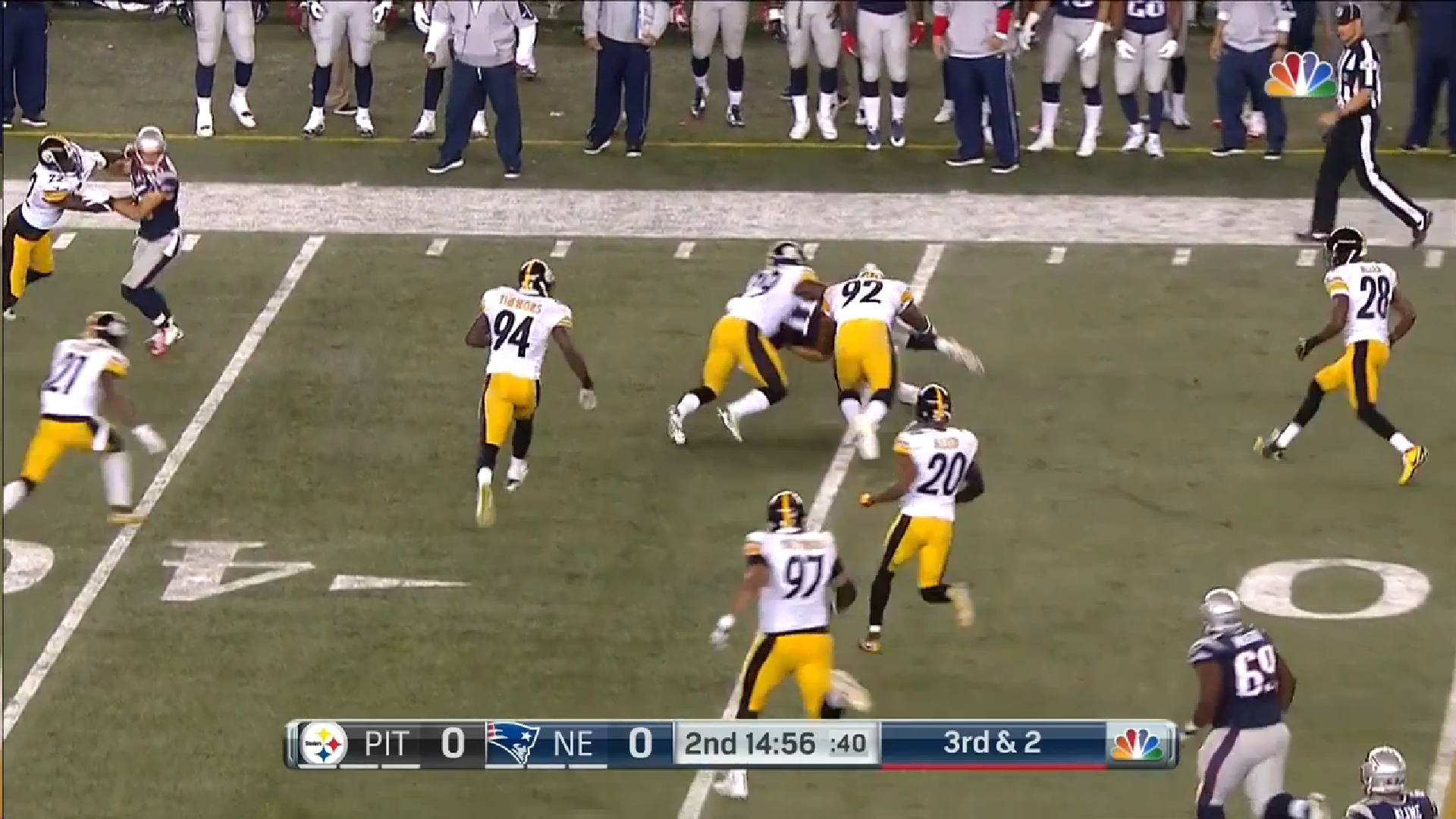 Though Pittsburgh Steelers veteran outside linebacker James Harrison played the most snaps out of everybody at his position on opening night, it would be hard to argue that his snap count—about 50 percent bigger than originally projected—translated into production.

On a night on which Jarvis Jones got the better of Nate Solder, the left tackle of the Patriots, Harrison struggled to get much going on the pass rush, even when he was brought on the field on certain third downs for that purpose. He only had one pressure on the night, one time that he really turned the corner, and that came late in the game.

It was a very un-Harrison-like game, not because he played terribly, but because he was largely quiet, without much of an impact. And it didn’t help that the Steelers asked him to drop on his first snap of the game, on which he was late to come back and cover the running back in the flat.

The Patriots opened the second quarter facing a third and two, with Harrison lined up on the left side. Julian Edelman got the handoff in motion on an end around, which the veteran was late diagnosing. He made the tackle, but it came several yards down the field.

Midway through the Patriots’ opening drive of the second half, Harrison tried to cheat against the run, knifing through the C gap, but the tight end was able to seal him inside and knock him to the ground. With a pulling guard and nobody to contain, the play was set up to go for double-digit yards.

Finally, on the second play of the Patriots’ first drive of the last quarter, Harrison registered a pressure, dipping under Solder to get around the edge, but he was too far up the arc, and the ball came out too quickly, for him to be able to have any meaningful impact on the play.

There is not much debating that this was overall a poor game for Harrison as a pass rusher. Even if the ball was getting out of the quarterback’s hand quickly, he still was not getting around, or inside, the tackle.

Late in the game, on the Patriots’ final drive, Harrison at least performed his duties in the running game, doing a nice job of holding the edge on a zone run looking to break outside. He nearly came off and make the tackle himself, but another defender beat him to the punch.

While there should not be much read into Harrison’s performance during this game—we need only look to the preseason as a reminder of how he looks just recently—it simply was not a very good game for him, in spite of the fact that he logged more snaps than all of Joey Porter’s other pupils.