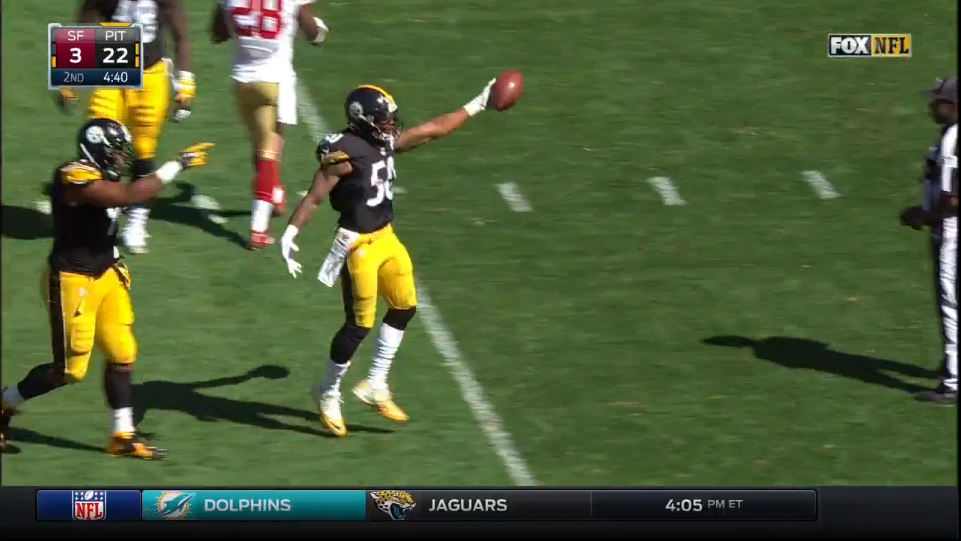 Vine is everything that’s awesome and terrible in this word. It can provide absolutely hilarious clips in six seconds. The problem is…six seconds, or the average attention span of your typical American student. I went to school for communications. I can provide first hand experience to that.

But sometimes, it provides a gem. Like this, one of my all-time favorite clips.

Allow me to bring it back to the Pittsburgh Steelers. If that Detroit reporter would have visited the team’s locker room following their 43-18 beatdown of the San Francisco 49ers, Mike Mitchell, Ryan Shazier, or any of the other 51 players in that locker room would have said the exact same thing.

It is unfair to say the team’s swagger is “back.” It probably never left. A Week One loss wasn’t going to sap them of it. Those inside the facility are more measured than the chaos that occurs outside of it. But man, it’s hard not to notice just how amped this bunch was during Sunday’s game. It wasn’t just when the Steelers had the game in hand, either. From the opening kickoff, the Steelers played with an energy, an auroa, that was infectious to each player. And each witness.

Heck, I wanted to go out there and hit somebody. The Steelers made me believe I could tackle Carlos Hyde.

They celebrated big plays. Not ostentatiously, there were no Peter Griffin Shipoopi song and dances but they were noticeably – and rightfully – excited. Antwon Blake bopped around after tackling Hyde for a loss on the 49ers’ first series. Arthur Moats did a jig after his sack.

But it wasn’t just those plays that jumped out to me. Anyone celebrates after making a big play themselves. That’s as common of a sight as jumbotrons and overpriced beers. It was the players that celebrated for their teammates, without ever being involved in the play.

William Gay did a skit of sorts when Cameron Heyward dropped Hyde on a screen. Bud Dupree high-stepped downfield as Shazier recovered a fumble. You can see it in the Vine (we’ve come full circle) I captured below, with Moats’ funky dance featured, too.

Mike Mitchell couldn’t contain himself and literally sprinted onto the field after Shamarko Thomas laid a big hit on one ofthe 49ers’ jammers.

It’s one thing to note how close a team is during the offseason, when literally every outlet of every team are exclaiming the same thing. It’s another to see it in action. One player happy for another as long as it achieves the team goal – winning.  The Steelers played hard Sunday. They played fast. They played physical. They played loose.  At that point, winning just becomes the byproduct.