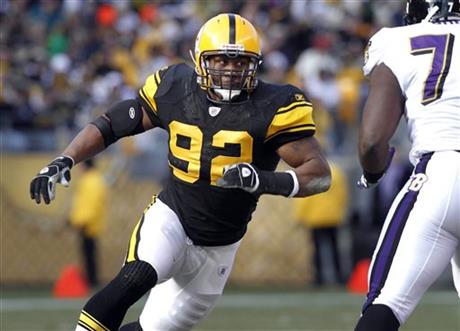 In scouting the St. Louis Rams this week, I only saw one area that could (should) prevent the Steelers from a victory on Sunday if Pittsburgh executes their offense properly. Unsurprisingly that area was the Rams defensive line, a dynamic and deep unit with the skill to make life miserable for even the best of offensive lines. Of the team’s eight sacks during the first two games of the year, seven have come from their defensive line.

Pittsburgh’s defensive front is quickly becoming the strength of their defense as well, with Cameron Heyward and Stephon Tuitt combining for 2.5 of the team’s seven sacks. The pair was unblockable against San Francisco, and now face an offensive line with two rookies and three first-year starters.

No quarterback is better under pressure (except Aaron Rodgers and maybe Ben Roethlisberger), but a handful are decidedly worse. Nick Foles is one of those signal callers, struggling mightily when asked to make throws under duress. He’s not unathletic, but Foles simply has trouble re-setting his feet properly when forced to move off his base. His mechanics have enough issues as it is, so if Pittsburgh can get home with their pass rush, it will bode well for their overall defensive success.

One of my favorite things that defensive coordinator Keith Butler has done is blitz aggressively with versatile personnel usage, as six players have recorded at least half a sack in two games. With Ryan Shazier out, the Steelers will lose a bit of that flexibility, as Butler loves to bring the second-year linebacker off the edge. However Sean Spence had a few good showings as a blitzer in preseason action, so I would guess we’ll see Butler use him aggressively on Sunday.

Rookie Bud Dupree will look to extend his sack streak to three games, and he’ll have another advantageous matchup to do so. Fellow first-year player Rob Havenstein mans the right tackle spot for St. Louis, but he doesn’t possess the athleticism or quickness to seal the edge against Dupree’s first step. In addition, he and right guard Roger Saffold have struggled mightily with simple twists and stunts this season, so look for Butler to attack that side of the line early on.

At left tackle, Rams first rounder Greg Robinson has had plenty of his own issues, mostly stemming from inconsistent footwork and technique. I’m not sure Jarvis Jones has the bend or athleticism to challenge him as much as James Harrison’s patented rip move will, but both players could record their first sacks of the season on Sunday.

Of course, Pittsburgh will have their own set of challenges up front, as Aaron Donald and Robert Quinn are among the best pass rushers in the league at their positions. Kelvin Beachum should have his hands full with Quinn, but I think it is a matchup his technique can win. As for Donald, he’ll likely face all three Pittsburgh interior offensive linemen on Sunday, as defensive coordinator Gregg Williams likes to move him around between the ends. Good luck blocking him one-on-one, as Donald will present a formidable challenge for all three with his hand usage and quickness.

It isn’t just the defensive front either, as Williams will send pressure from a variety of spots. The Rams defensive backs are actively engaged in blitzes, especially cornerback LaMarcus Joyner, one of the more versatile players on St. Louis’ defense. Just about every player is a blitz option for Williams, and Pittsburgh will need to be prepared for a variety of looks.

Both teams defensive fronts will offer a difficult challenge for the opposition’s offensive line, as well as the variety of blitz packages both defensive coordinators will send frequently. Whichever team can solve the other’s offensive line in pass rush situations could come out the victor on Sunday and improve to 2-1.