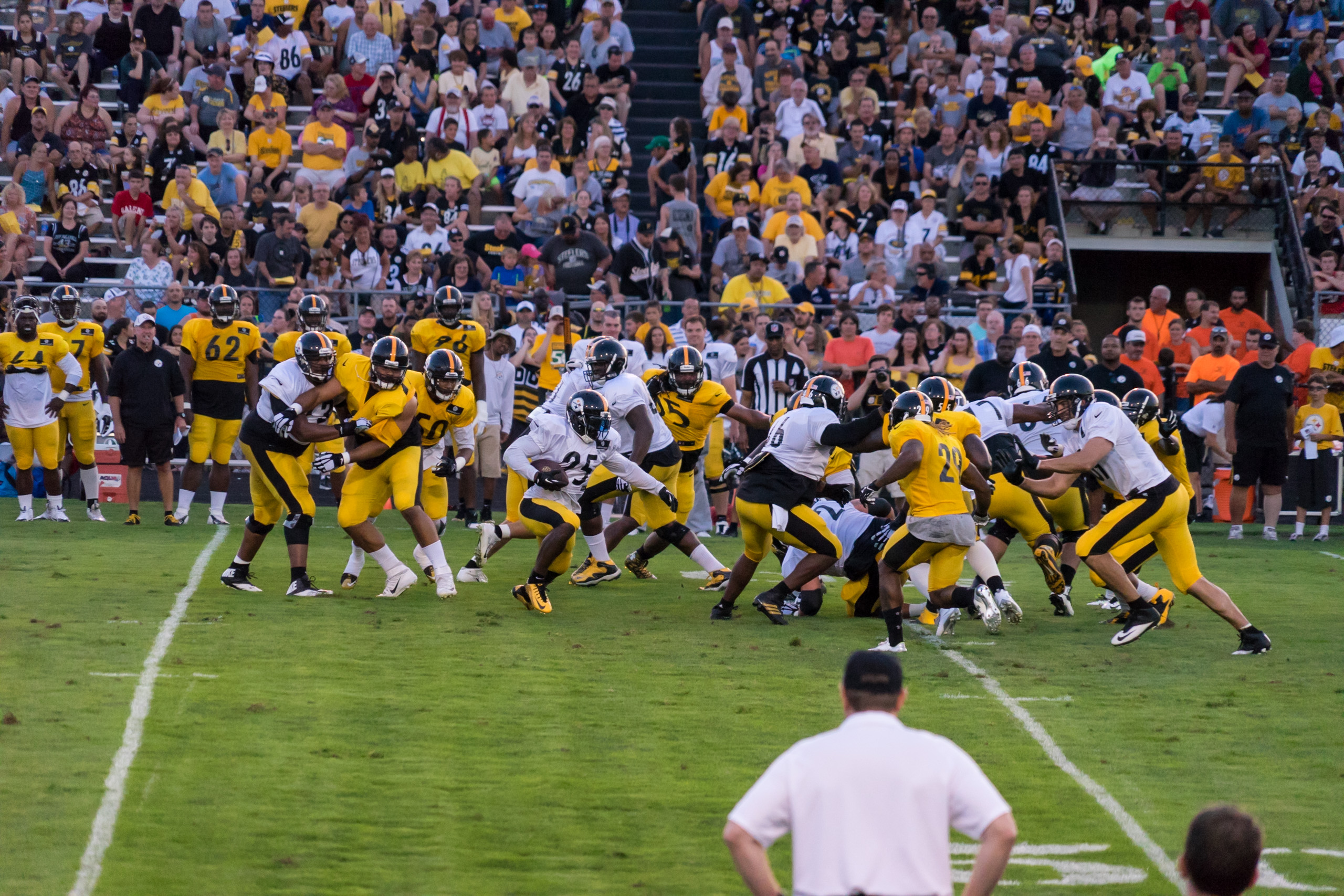 Couldn’t fall asleep last night until about 1:30 a.m., then woke up around 6 a.m. and couldn’t fall back asleep. Been like that for several days now. I’m not an insomniac, I don’t have night terrors or really dreams at all, and my wife is about as quiet a sleeper as you’ll find. My problem stems from one simple issue, something that has plagued me all my life, and arises annually in late summer for all 25 of the years I’ve been on this earth (ok, maybe not when I was one…). It goes by the name of football, and yes, I’m probably an addict.

So there I was, 6 a.m., maybe my fourth consecutive night of less than five hours of sleep, wide awake with dozens of questions racing through my mind. Will Jarvis Jones play? Will Gerod Holliman tackle someone? Will Dri Archer and Brad Wing walk out of the tunnel together for the game? Will Landry Jones suck tonight?

None of my symptoms are normal, but the sickness is absolutely real, and it is one I’ve experienced over and over again throughout my life. Make no mistake though, despite my present exhaustion and the swarm of butterflies enveloping my intestines right now, I wouldn’t trade this feeling for anything. Because waking up this morning, I knew millions of people across the country suffered from the same illness. To borrow from Christopher Walken, “We’ve got a fever, and the only prescription is more football” (slightly altered).

Here’s ten questions for you to ponder while you hopelessly attempt to keep yourself busy all day until the Pittsburgh Steelers take the fieldtonight at 8 pm EST. in the Hall of Fame Game against the Minnesota Vikings.

Within each of these questions reside a host of additional inquiries, including what Anthony Chickillo will look like if he gets any snaps against proven NFL tackles. Both Howard Jones and Shayon Green have received first team reps in place of the banged up Jarvis Jones, and both outside linebackers have performed admirably from the right side. But with Arthur Moats taking all the first team reps at left outside linebacker in practice, Chickillo has been relegated to a few second team reps at best. He’s worked against Mitchell Van Dyk and Kelvin Palmer, who both have played well, but have a combined zero games of NFL experience.

Having said that, Chickillo has shown the burst and ability to dip the edge that should translate well against even more athletic offensive tackles during the preseason. Howard Jones and Green have both flashed at times, Green more against the run and Jones more as a pass rusher. One would guess that Chickillo still has the upper hand based on the fact that the team invested a draft selection on him, but Jones and Green aren’t going to make this easy. On top of that, there are still practice squad spots to be had, making this battle one of the more intriguing to watch moving forward.

2. Can Tajh Boyd re-insert himself into the mix for QB #3?

Listening to Mike Tomlin, it sounds like Landry Jones will be provided ample opportunity to sink or swim this preseason, as he’ll start tonight’s game and be under the microscope throughout August. Tajh Boyd started off camp with a few eye-opening throws, but has struggled to hit the gimme passes and is far too slow to process what the defense is throwing at him. His decision-making and mechanics can be remarkably inconsistent, but he does have a nice arm and can throw with excellent touch when his feet are set properly. I’m looking forward to seeing if Boyd can not only stave off Tyler Murphy for reps, but also to see if he can overtake Jones if the third-year quarterback tanks tonight.

Jordan Berry has improved as training camp has gone on, but he still hasn’t had the hang time or consistency that Brad Wing has shown. Ironic in some ways, since consistency was perhaps Wing’s biggest issue last year, and still could be when the lights come on this season. Berry’s hopes aren’t dead yet, and if Wing struggles as he has in the past, the Eastern Kentucky punter will need to be ready to show off his leg. Regardless of who wins the job, this is again looking like one of the weakest areas of Pittsburgh’s roster (which, I guess, is a good thing in a way…).

4. Will Gerod Holliman tackle someone?

I’m not talking about sticking a shoulder into a receiver who doesn’t see you coming, and I’m not talking about throwing himself into a pile of bodies when a runner is obviously already stopped. Even Holliman did those things in college. What I’m talking about is squaring up against a runner coming downhill, flying to meet him, and showing good form to wrap and drive through the ball carrier. Holliman did it maybe a handful of times all throughout college, and it remains his biggest question mark heading into camp. We joke about it, but the reality is that Pittsburgh won’t (if history is any indication) and shouldn’t roster a safety who can’t tackle. Not hit, tackle. With the lights on, the adrenaline flowing, and the voices of so many naysayers drifting through Holliman’s mind, tonight could be the best shot he has at shaking off his demons and turning over a new leaf.

5. Can Bud Dupree make an impact out of the gate, or will his rawness be evident?

Bud Dupree has some tools as a pass rusher that you just can’t teach, and the fact that he’s an athletic freak doesn’t hurt matters. That said, he’s got a ways to go in terms of developing his awareness and ability to track the football as a defender. He’ll often freelance coming off the edge, which results in the linebacker getting pushed wide by more athletic offensive tackles. Will the spin move and the inside counters continue to be utilized? Can Dupree crash down the line of scrimmage and avoid taking himself out of plays? Will Pittsburgh move him around the defense at all? Coming into the draft I had a lot of questions about Dupree in my evaluation of his play at Kentucky, questions that he can begin to answer tonight. I can’t wait.

6. Is Alejandro Villanueva ready to be a #3 OT?

I know what we all want to say, as Alejando Villanueva’s presence on the 53-man roster would take us one step closer to a franchise without Mike Adams, a day we all pray for in earnest. Villanueva has shown flashes of incredible power, and clearly has the length to give edge rushers tons of issues trying to win the corner. Can he avoid getting doubled-over in the run game? Will his height always be a trait he fights as much as he utilizes? Can he abstain from oversetting and becoming susceptible to inside counters from pass rushers?

Yes, the mere existence of this question suggests that Cam Thomas’ presence on the team will be expected for the second straight season. Get your tears out now so they can be replaced with anger when the season begins.

That said, Clifton Geathers’ departure also allows us to zero in on what should be one of the best battles of camp between Ethan Hemer and L.T. Walton. Both fighters with tons of hustle and activity as pass rushers. Hemer has much better hand usage and has shown a surprising array of rush moves, as well as the ability to play with leverage despite his 6’6 frame. Walton doesn’t get man-handled very often, and is a relentless competitor with the athletic advantage in space over Hemer, but is behind the eight-ball technically and needs to be more precise in his movements. I think Hemer has the inside track for the #6 defensive line spot, but don’t be surprised if Walton pushes him throughout the preseason.

8. Can Jesse James get nasty?

The tendency could be for James to relax now that Michael Egnew and Rob Blanchflower’s departures have basically sewn up the #3 tight end spot for the Penn State product. What James needs to do however, is show what type of competitor he is, not just as a receiver, but also as a blocker. Every jump ball needs to be his, every block is a vital one, and every play in the red zone is an opportunity for his length and ball skills to shine. I’ve been pleased with James in camp, and while he has a lot to work on, I think he’ll get plenty of reps and targets during preseason action, with Heath Miller and Matt Spaeth unlikely to play much.

If you’ve read my reports on practice, you already know who I believe to be the superior runner and all-around player. Cameron Stingily will grind the ball, and likely get the majority of tonight’s carries, but Jawon Chisholm has an opportunity to show off a more versatile game. This battle could very well come down to not only who runs better, but each player’s performance in pass protection, as a receiver, and on special teams as well. With Le’Veon Bell suspended the first two games of the season and Dri Archer still not showing signs of becoming a heavy-carry back, Chisholm and Stingily both have huge opportunities to shine tonight.

B.J. Finney has had a little bit of an up-and-down camp, but he’s a fighter who re-sets really well in his stance against power rushers. He doesn’t have ideal physical tools, but he makes up for it with leverage, hand placement, and a strong motor. He and Miles Dieffenbach have quietly battled for reps, but Finney’s versatility as a center or a guard has probably given him the advantage, especially with Reese Dismukes struggling to hold his own. Big stage for all three of those guys tonight.

1. If Vince Williams plays, will he kill someone?

3. Can Dri Archer be the return man he was in college?

5. Will Matt Conrath try anything other than a rip move as a pass rusher?

7. Will Ian Wild get reps as a long snapper?

8. Can Ryan Shazier make it through one series without getting hurt?

9. Over/under 3 times Cam Thomas ends up on the ground (other than a tackle)?

10. Will James Harrison soak through the sweats he’ll undoubtedly be wearing while rolling around the sidelines?

If you couldn’t tell, I can’t freaking wait until tonight.