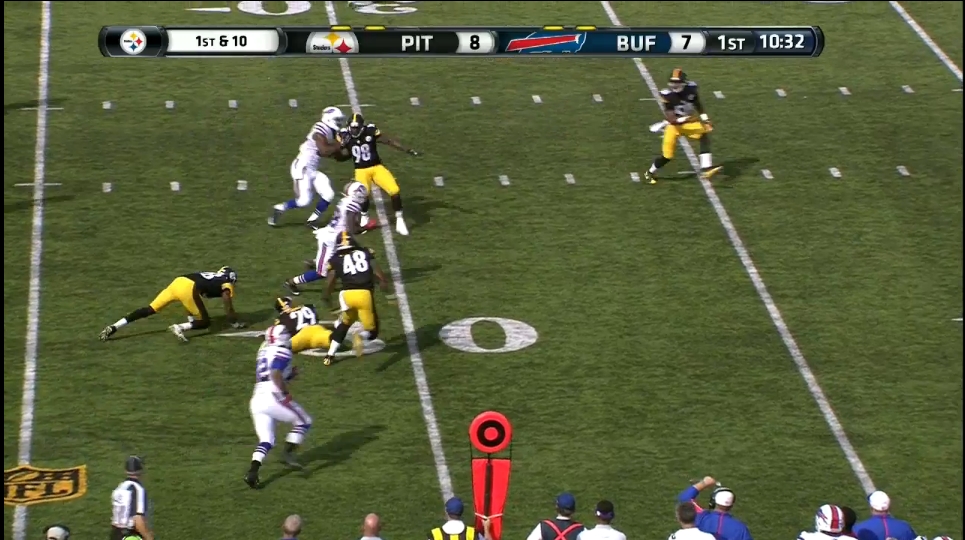 Just about every aspect of the Pittsburgh Steelers defense was pretty pathetic against the Buffalo Bills, but one of the most egregious parts of their poor performance was the shoddy tackling that took place throughout the game. The reality of preseason is that players aren’t always used to tackling again, but with three games already under their belt heading into Saturday, you’d like to believe the Steelers were well-acclimated enough to be more efficient in this area.

One of the most egregious errors took place on the Bills second drive of the game, when E.J. Manuel found Marquise Goodwin for 16 yards on 1st-and-10. Cortez Allen missed a tackle that would have held the grab to a nine-yard gain, and Shamarko Thomas came flying in out of control to overrun the stop. Goodwin picked up seven more yards before Bud Dupree tracked him down.

Later in the second quarter, Jarvis Jones came flying in out of control and barely slowed down tight end Matthew Mulligan on this play.

Of course, you can’t forget how Pittsburgh let Tyrod Taylor and Chris Gragg work their way into the end zone on two second half scores that both should have been stopped well short of the goal line. Several Steelers missed the tackle on Gragg, while Sean Spence let Taylor slip away from his grasp.

Tackling is only partially about wrapping up and driving through a guy, the most important part is appropriately positioning yourself to make stops working from the top-down on ball carriers. Pittsburgh defenders consistently chose overly aggressive pursuit angles and either worked themselves out of plays, or didn’t position themselves to break down and make stops in space.

Of course, tackling is a lot easier when multitudes of players aren’t running wide open in your secondary. The coverage in the defensive backfield was atrocious, which will always set your unit up for tough stops down the field. When a player has the time and space to make a catch, turn upfield, and collect himself on the move, before a defensive player even lays a hand on him, the chances of making a quick, successful tackle obviously go way down.

Alden Darby provides a perfect example of what I’m talking about by taking an atrocious angle to the football here against Cierre Wood. Flies up out of control and can’t move laterally quickly enough to stop Wood for a minimal gain. Also, yes, I’m aware that Terence Garvin and Vince Williams both are utterly clueless on this play.

One final example, from Jarvis Jones again. Gets blown back initially by the block, then works off with good arm extension and…..ankle nips at the runner? Not even sure what this is.

Tackling is often an issue for teams in preseason, but the bigger issue is the Steelers not even being in position for tackles more often than not, especially in the secondary. Obviously coverage breakdowns are going to happen, but this is a pass defense that isn’t close to ready for real NFL action, and Week 1 is just 11 days away. Add shoddy tackling to the to-do list, and you have a lot for this defense to work on in a very short amount of time before the stakes will be much higher.