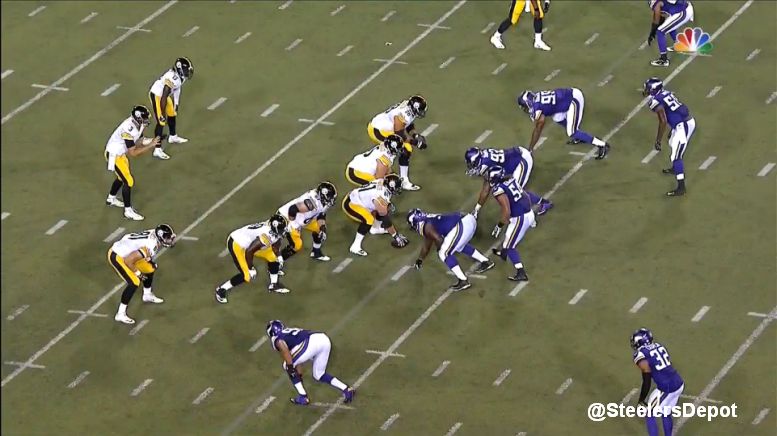 Look, I know the offensive line isn’t a sexy thing to talk about. And with five moving parts that have to work together as one, it can be really hard to evaluate sometimes. Even in a supposedly “vanilla” preseason game, judging whose to blame isn’t as easy.

I know I wrote that the five lineman have to work together. But there’s a level beyond that. Not all five guys are on the same track. Sometimes, they split off into essentially two separate groups. Lineman are responsible for “reading the triangle” being responsible for a certain group of defenders.

That’s what happened on this occasion in the Hall of Fame game. And a failure to do that resulted in a sack.

It’s the third quarter with the second-team offensive line. The Pittsburgh Steelers employ a six man protection, the five lineman and a tight end, against a six man box. From quarterback Landry Jones’ perspective, the offense is “safe.” They have enough players to block the defense, even if all six rush. Six on six. Any additional pressure from a DB creates the hot read. But there is no immediate threat.

This also means Dri Archer isn’t apart of the protection. There’s no one for him to read. He’s free to release into his route, which is what he does.

Our two triangles have formed. Attempt to illustrate it below but the camera angle doesn’t make my drawing flattering so I’ll show it and reiterate it below. 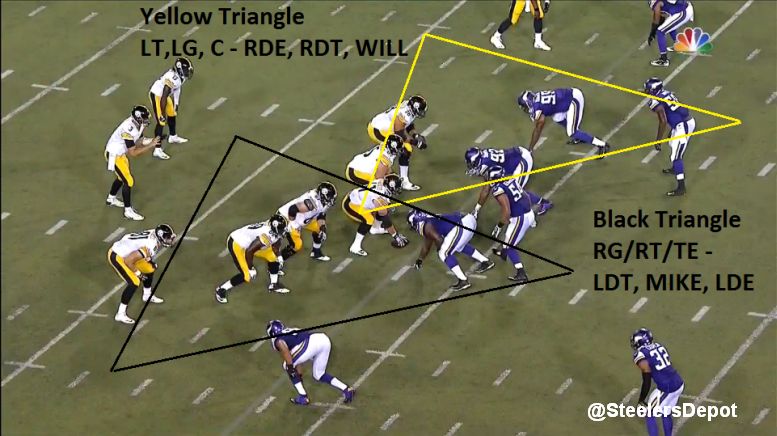 The protection is broken up into two groups. The left tackle, left guard, and center in one, and the right guard, right tackle, and tight end in the other. Group one is responsible for the right end, right defensive tackle, and the SAM ‘backer should he blitz. That’s their triangle read.

Group two has to left defensive tackle, the left end, and the MIKE linebacker, should he blitz. That’s their triangle read.

A lot of people will immediately point to center Reese Dismukes as the obvious culprit for allowing the pressure. But the MIKE linebacker, the one who gets the pressure, isn’t in Dismukes’ triangle. You can see where his eyes snap to off the snap. The left side, his triangle, to see if the SAM blitzes. This could result in Dismukes having to pick him up or take on the right defensive tackle while the guard takes the linebacker, depending on the blitz. 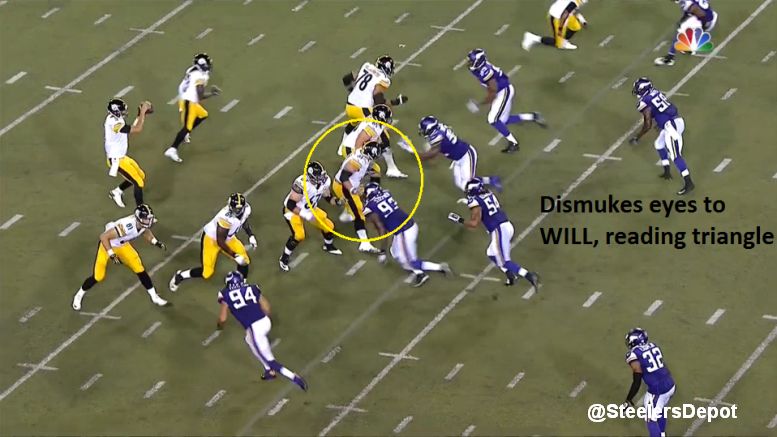 The issue lies in right tackle Kelvin Palmer. Off the snap, he immediately darts his eyes to the left end, ignoring any chance the MIKE linebacker blitzes. It leaves B.J. Finney in conflict, one man to pick up the defensive tackle and the linebacker. Simple math tells you that’s not possible. 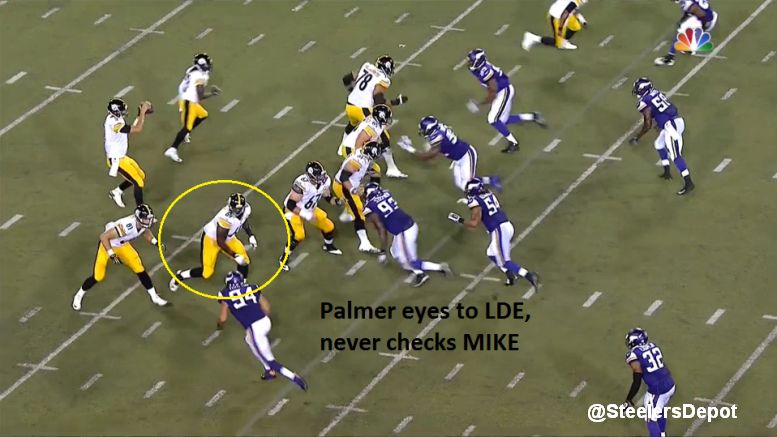 Had Palmer looked inside to check for the blitz, he could’ve slide down to the LDT while Finney picked up the linebacker. You have to scan inside out. He winds up doubling the defensive end with the tight end. I get a defensive end on a tight end isn’t a favorable matchup, but you’d much rather have edge pressure than it coming from the interior. And a blocked defender is better than an unblocked one. 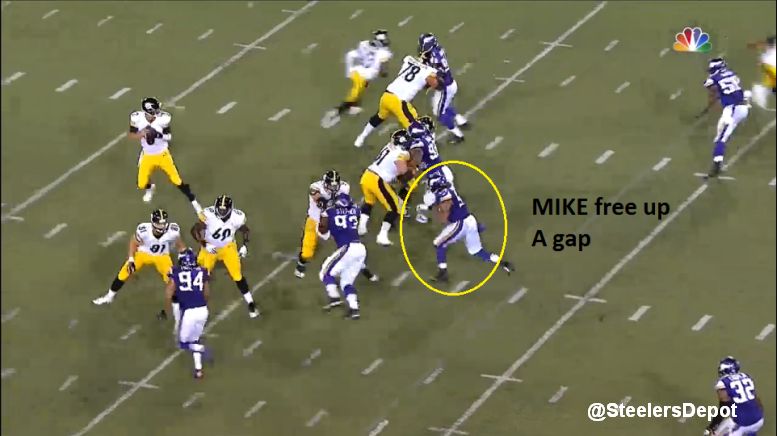 The offensive line must always be in a “worst case scenario” mindset. What happens if every potential rusher blitzes? We recognize that won’t always happen but you have to think like it will. Because eventually it will.

So let’s assume all six defenders in the box rush and Palmer slides to the right like he does in this play. That leaves four lineman to pickup five defenders. Again, the math works out in the defense’s favor, one more rusher than there is blocker.

Of course, it isn’t always as simple as “it wasn’t my job.” Dismukes is the center and that position, above all, has to play with “active eyes” to scan for where he should help. He probably was a little too quick to latch with the left guard. He could have had his inside half to help while scanning for any other threats. Starting quality, veteran centers probably make that pickup. But the bulk of the blame shouldn’t fall on the center. He has to respect his read. And he did. Palmer didn’t.