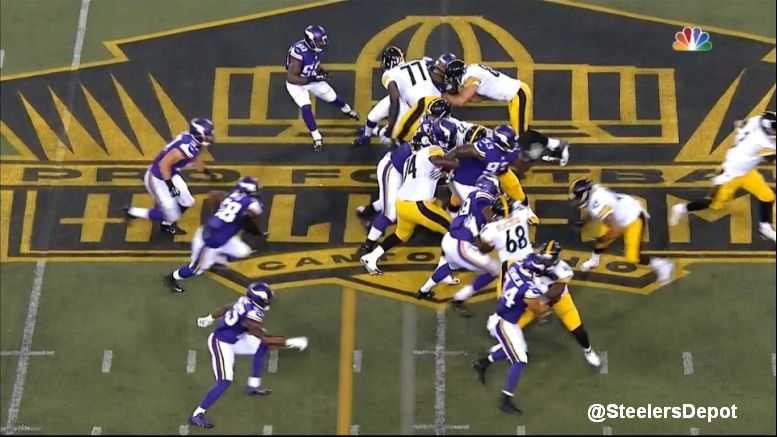 Still watching the replay of yesterday’s HOF game but wanted to touch on some players who participated in the first half only. We’ll start by putting guard Chris Hubbard under the microscope.

Simple base block on the DT for Hubbard. But the guard struggles to get his arms fully extended and consequently, generates little push. He sticks to the block but does little else to help create a path. 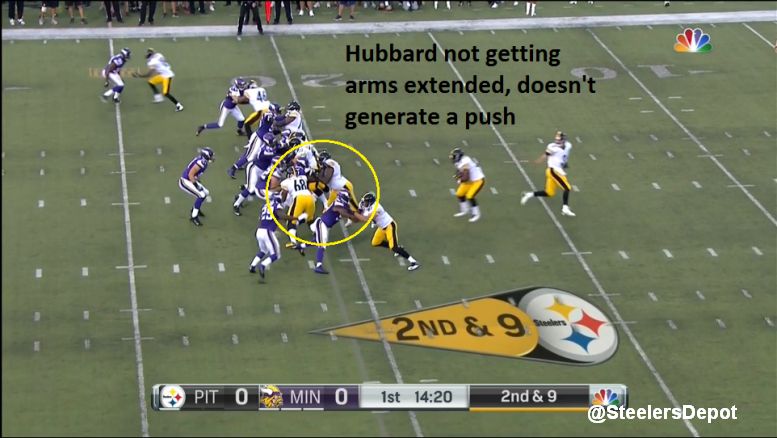 First play of the Pittsburgh Steelers second drive. Hubbard is combination blocking, chipping on the one technique before moving to the second level to block the linebacker, #50. But he’s unable to stick, the linebacker shedding nearly immediately, making the tackle on Cameron Stingily. 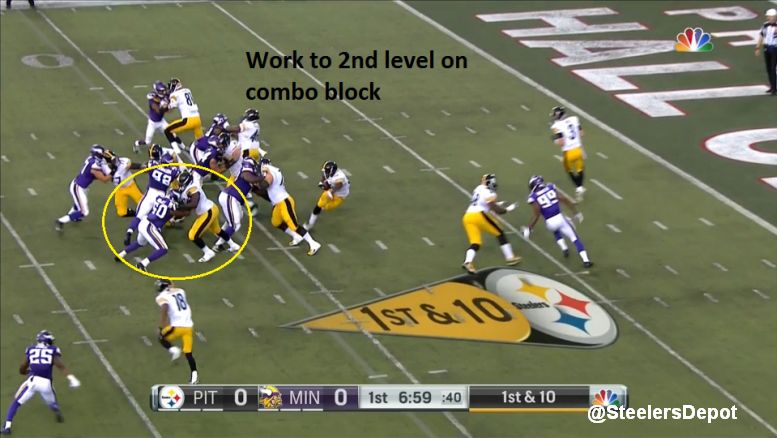 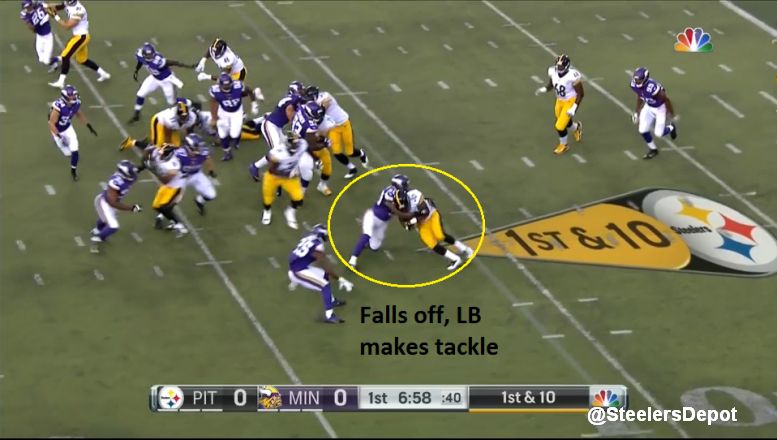 Later on this drive. This time, we’re examining Hubbard in pass protection. He’s asked to block the three technique, the player between tackle and guard. The DT gets under Hubbard’s pads before shedding him. Hubbard doubles over and is unable to slide, opening up his inside hip and letting the rusher through. Landry Jones gets the ball out before there is any real pressure but it’s still a poor play. 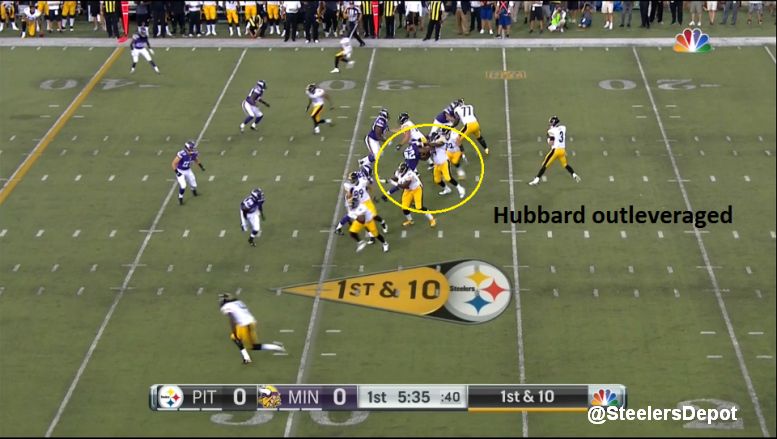 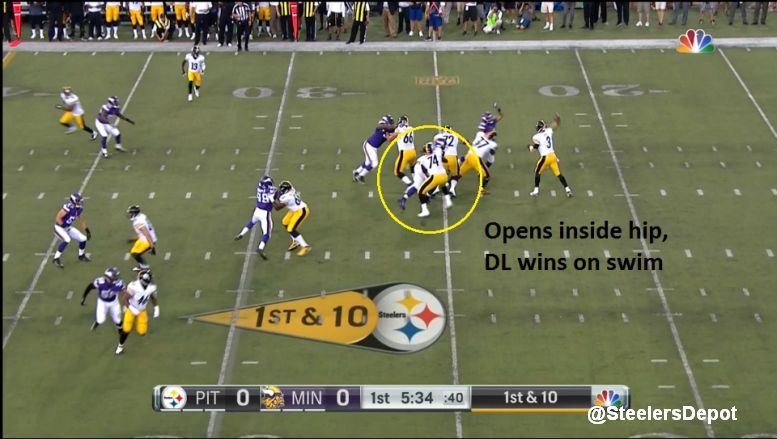 Classic Power O with Hubbard and FB Roosevelt Nix leading the way. Hubbard doesn’t show great technique on his block, failing to attack the outside shoulder of the linebacker, who keeps his outside arm free and is able to work off the block and help blow the play up. 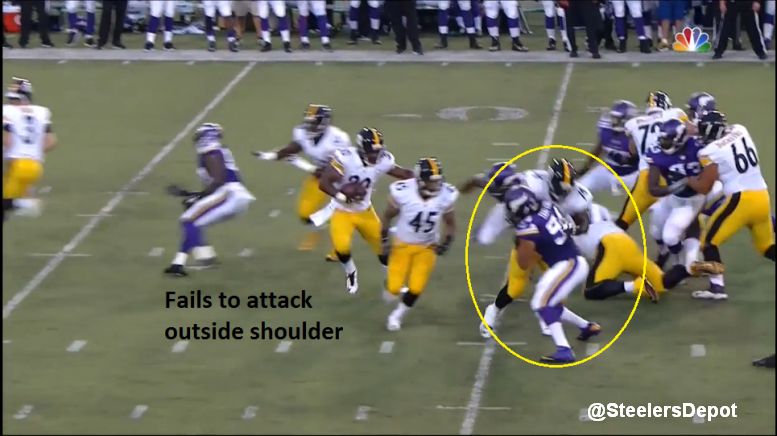 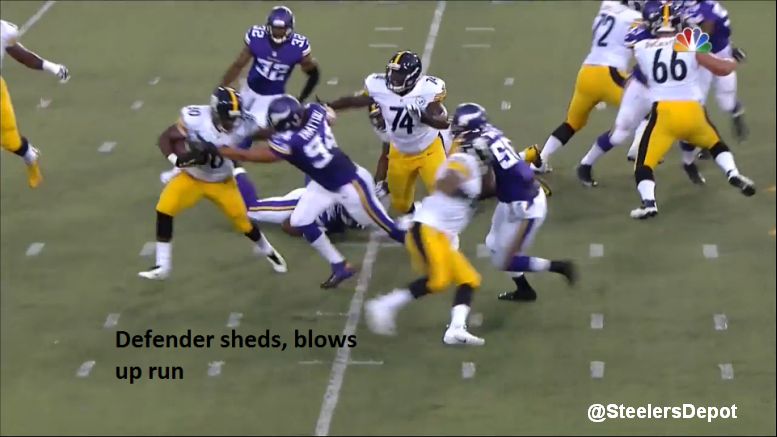 The 4th and 1 dive to Stingily. Hubbard struggles to get square to the DT, who spikes inside ff the snap. The DT slips past, getting in the backfield, and would’ve had caused the turnover on downs had it not been a nice glimpse of elusiveness from the rookie back.

Now we’re watching Hubbard out in space. Screen to the left to Jesse James. He releases into space quickly enough but gets a poor punch on the linebacker. Linebacker has an easy time shedding and making the tackle on James. 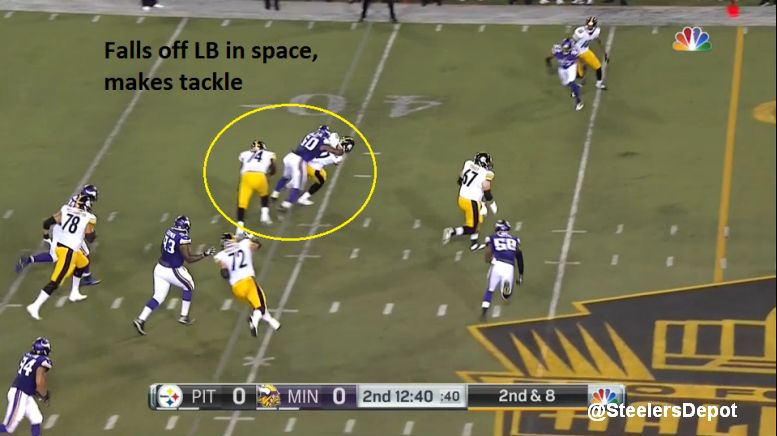 This is the Dri Archer “whiff” that produced such a negative reaction on Twitter. Looking at it again, I don’t see it being Archer’s fault.

For starters, the biggest source of pressure comes from the DT, again #92. No matter what, this is obviously not Archer’s man. Le’Veon Bell isn’t going to be asked to pick up a 300 pound DL, let alone the tiniest back on the roster.

It’s an eight man pressure pre-snap. The Steelers have seven in to block, automatically creating the hot for Jones. That ball is getting out of his hand quick, no matter what. 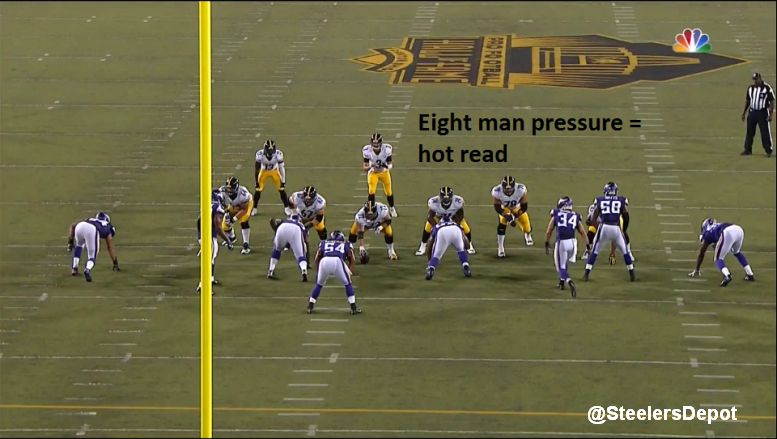 The Steelers slide protect to the right. And rules dictate that running backs pick up pressure away from the slide. Archer’s eyes are to that side the entire time, sliding across the formation to pick up any free rushers. There aren’t but still, there’s nothing Archer can do to help the protection. His man has dropped and now Archer is able to release.

We know it isn’t Archer’s fault but assigning blame on this play is difficult and impossible to say without certainty. It depends on whether or not you consider Alejandro Villanueva to be a covered lineman. There is #34 coming down in a blitzing stance over top of him, but he’s not truly “covered” the way a DL covers someone, like #92 over Hubbard.

This is important because it dictates slide protection rules. The general rule is the first uncovered lineman starts the slide. So if Villanueva is considered covered, and we know Hubbard is too, then the slide starts with Cody Wallace. Meaning, Hubbard is responsible for the DT, #92, and the fault ultimately lies with him.

If we consider Villanueva uncovered, and this is the way I’m leaning, then the slide starts with him, meaning the left tackle should have been there to pick up #92, giving Archer a dual read away from the slide, picking up the inside rusher of #34 and #58 (it ultimately would have been #34).

After a lot of internal back and forth, this is probably Villanueva’s, not Hubbard’s fault. But here’s the GIF so you can decide for yourself.

A rough day for Hubbard. There was the occasional bright spot, his combination blocks improved a little as he got more chances, but this wasn’t an inspiring performance.

My biggest concern has always been about his lack of athleticism and it showed tonight. He’s relatively slow out of his stance and has trouble sealing defensive lineman that slant and stunt. Struggles to stick in space. Even in a booth, he has issue getting his arms extended and doing anything more than drawing a stalemate at the line.

The lone upside here is none of his competition appeared to play much better.