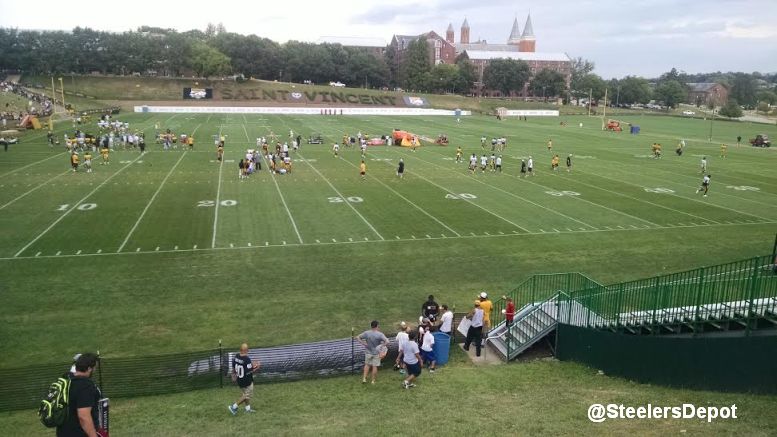 In advance of the Pittsburgh Steelers second preseason game against the Jacksonville Jaguars, I take another crack at predicting the team’s final 53-man roster and their ten man practice squad. Given the added benefit of seeing these players work during 13 training camp practices and one preseason game, I’ve got several changes to make to my original prediction.

Analysis: (No Change) I’m still torn between whether or not the team will agree with my two-active-quarterbacks theory, but I’m still holding out hope that Landry Jones is cut and Tajh Boyd is placed on the practice squad. The team has strangely limited Boyd’s reps despite the fact that he hasn’t been worse than Jones, but it may be because Pittsburgh simply wants to get an extended look at the former Oklahoma signal caller. With Gradkowski still out, the final roster spot really could swing on whether or not his shoulder is healthy come Week 1.

Analysis: (No Change) While Le’Veon Bell sits on the suspended list, the burden will fall to these four to carry his offensive mantle. No easy task for sure, but Harris is in outstanding shape and has some improved quickness, while Archer was effective in the first preseason game of the year. No surprises here.

Analysis: (No Change) James has struggled during the past week, but the team is sure to keep three tight ends, and right now there are simply no worthy challengers. Obviously James won’t be cut if one were to arise, but he’ll probably be relegated to primarily special teams work this season regardless of his competition.

Analysis: (One Change) So long, Mike Adams, don’t let the door hit you on the way out. Villanueva’s strong play and high ceiling have been encouraging so far during camp, and with Adams’ health still a question mark, I’m predicting the big man robs him of a roster spot. Finney has struggled, but I still prefer him to Dieffenbach. The man to watch for is Mitchell Van Dyk, whose tackle/guard versatility could make him a more attractive roster candidate as the preseason goes on.

Analysis: (One Change) First five are locks, as Thomas’ recent play has been extremely encouraging to watch. Hemer and Walton will battle it out, but I think the team will go with the more experienced option, as Hemer has consistently played well in practice. Walton just needs a little more development, but he’s clearly the superior athlete. I’m excited to watch this battle go the distance during preseason action this month.

Analysis: (One Change) I thought that deciding the fifth spot here would be more difficult than it was, but after watching the physical and athletic limitations of Shayon Green against the Minnesota Vikings, and the inconsistencies and mental mistakes of Howard Jones, Chickillo is an easy choice. He’s got to learn to get off blocks sooner and make better use of his hands, but his hustle, explosive first step, and physical style of play make him the obvious option.

Analysis: (One Change) Maybe a little bit of a battle between Webb and Kevin Fogg for the final cornerback spot, but I think Webb has been superior, despite the strong camp showing by Fogg. Webb is a little bit bigger and is certainly more physical, plus has the ability to play the slot or outside, as well as excel on special teams.

Analysis: (One Change) I would give the final safety spot to Ian Wild by a nose, but I think the team prefers Darby’s vocality and leadership. Of course,Ross Ventrone and Robert Golden’s injuries have really thrown the safety position into a quandary, so there is a lot to still be proven with this group moving forward.

Analysis: (One Change) Wing is inconsistent, but has a strong leg, and I don’t think Jordan Berry has done enough yet to push him off the roster.

Analysis: (Seven Changes) Actually was not very difficult to select this group, the only names I struggled to leave off were WR C.J. Goodwin, Zumwalt, and OT Kelvin Palmer. All three have had their moments during camp, but are either stuck at an unfortunately deep position on the team, or are too inconsistent in their play.

I think the team is excited about Phillips and Chisholm’s potential, as both have shown flashes of strong play. Clear and Dieffenbach have both had their struggles, but the former has so much to learn technically before he can really be judged, and the latter is still rounding into his pre-knee injury form. I think the team will be patient with both.

Like Fogg and Wild a lot as options to come off the practice squad if injuries befall the secondary. I’ve already spoken of Walton and Van Dyk, but I believe both players are still firmly in the mix for a spot on the 53-man roster as well.