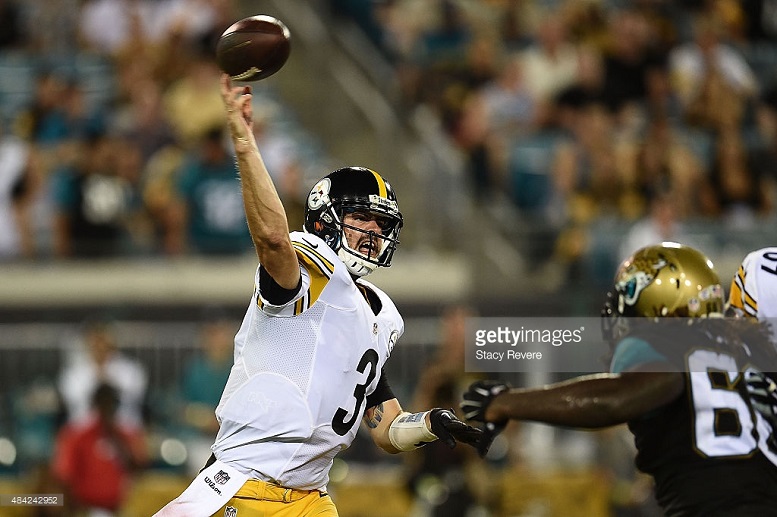 The Pittsburgh Steelers have three more preseason games left before they’ll have to finalize their 53 man roster for 2015 and if you think this might finally be the year that they decide to only go with two quarterbacks instead of three, you might better move on from that notion.

During a Thursday morning interview on Trib Live Radio, Steelers general manager Kevin Colbert was asked to give his thoughts on the team’s history of keeping three quarterbacks on the 53 man roster and if he’s ever tempted to go with just two.

“We’ve always had the philosophy that we want to have three [quarterbacks],” said Colbert. “It’s such a demanding position. There’s so much learning that has to go into it and you know, as we mentioned earlier, guys are going hurt and you never want to get caught short at the quarterback position. So, we’ve always wanted to have three.

“There’s been times when we’ve gone with two maybe for a given game, you know we’ve had Charlie Batch out for a weekend, or Byron Leftwich out for a weekend, and we went with two, but in general, we want to have three. But every year will be different depending on the roster makeup that we have after we come out of this camp.”

So, does Colbert think that third-year quarterback Landry Jones has shown some progress so far this year in training camp and the preseason?

“I think he’d like to exclude some of the inconsistency he’s shown in the first two games, but there was a lot of positives. We had a drop in the Hall of Fame game that probably changes that game and he missed a few throws down the stretch the other day after we had gotten us lead. We didn’t hold onto the lead and then we didn’t recapture it. So I’m sure he wants to see more consistency, but improved for sure.”

The Steelers waived former Clemson quarterback Tajh Boyd this past week now that backup Bruce Gradkowski has been removed from the PUP list. That move wasn’t surprising in the least, however, as Boyd was never a real threat to challenge Jones for the No. 3 quarterback spot. With that said, while Jones certainly has been victimized by a few drops so far during the team’s first two preseason games, he’s yet to show that he can ever be relied on to be a full-time backup to starter Ben Roethlisberger.

Jones will undoubtedly play quite a bit in the Steelers final three preseason games and being as it looks like he’s a virtual lock to make the final 53 man roster once again this season, we can only hope that we see noticeable improvement from him in those remaining contests.

In my opinion, since the league moved on from emergency inactive quarterback rule several years ago, teams should only keep a total of three signal callers on their roster if they truly believe their No. 3 has the potential to become their No. 2. I’m just not seeing that potential with Jones after 9 preseason appearances, but the Steelers obviously do.