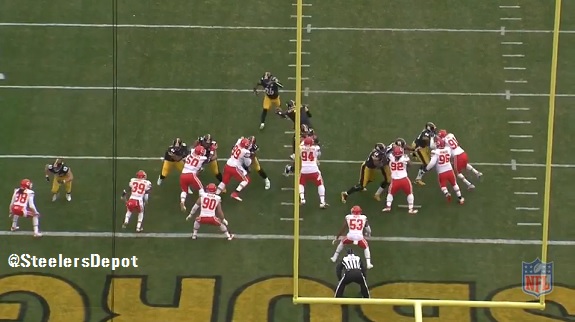 Even thought the Pittsburgh Steelers offense was highly productive last season, they suffered at times inside their opponents red zone and that’s one area they’ll look to improve in this upcoming season. After looking back at our charting from last season, I was a bit surprised to see that the offense only used play-action on 11 of 95 passing plays that were run inside the red zone.

Now, being as we don’t chart every team, it’s hard to know whether or not the Steelers 11.6% of play-action plays run inside their opponent’s red zone is on par with the rest of the league. However, I will tell you that five of those 11 plays that they did use play-action on resulted in touchdowns and that four of those included the offense having two or more tight ends on the field.

Here’s another interesting tidbit for you. On four of those red zone play-action plays, three of which resulted in touchdowns, LeGarrette Blount was the running back, not starter Le’Veon Bell.

Now, the opposing defenses that quarterback Ben Roethlisberger sees when he approaches the line of a scrimmage might dictate him checking out of a planned run to a pass, so that needs to be taken into account when discussing play calls.

As we move into the 2015 season, we certainly will again be tracking the use of play-action in our game charting and it will be interesting to see if that percentage goes up inside the red zone.

In case you’re curious, Roethlisberger was 7-of-10 passing inside the opponents’ red zone last season when using play-action. Additionally, one of those incompletions, if you remember, was a dropped pass in the end zone by tight end Heath Miller in the game against the Kansas City Chiefs and I have included a gif of that play before.

Obviously, it will take more than just an increase in play action to help the Steelers offense be more productive in 2015, but it is one area that just might help. After all, Roethlisberger is more than adequate when passing off of play action and opposing defenses might just try to key more on Bell inside the red zone in 2015.