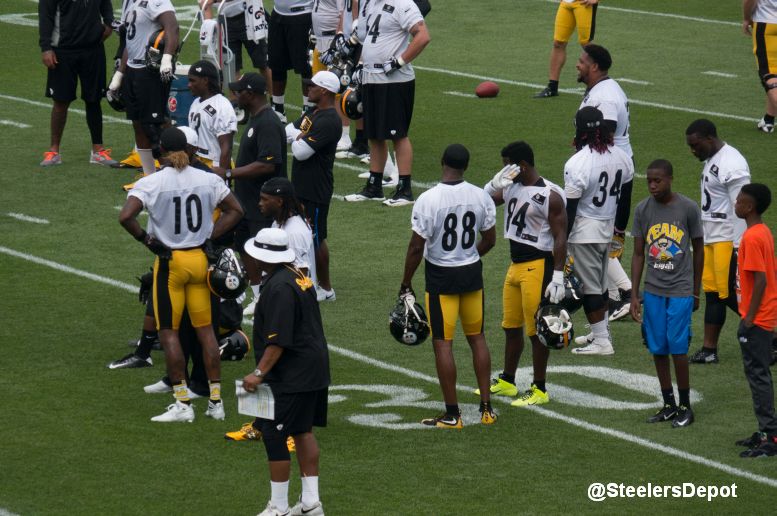 Few can argue with the success the Pittsburgh Steelers have had developing wide receivers via the NFL draft, from Hines Ward to Antonio Brown. The franchise’s strength of identifying talent at the position should put them in quite a quandary come time for roster cuts however, as a number of wide receivers have had an impressive first week of training camp.

Most expected to see Martavis Bryant make strides as a receiver, and he definitely has. The Clemson product’s routes are developing, and he’ll still suffer the occasional drop, but Bryant’s catch radius, flexibility, and outstanding body control in the air are going to make him a very difficult cover this season. His vertical ability is such a threat to defenses over the top, as his long strides chew up off-man cushions, while his first step explosiveness and length make him a challenge for physical corners looking to press him at the line of scrimmage.

Markus Wheaton has had an up-and-down start to camp, struggling to track the ball downfield at times and also dropping a few passes. The coaches have commended the hard work he has put in this offseason however, so an improved football IQ and physique should have his stock up once again this season.

Sammie Coates is going to take time, just like most rookies. I’d love to see him get more 1st team reps, as he’s a tough eval right now thanks to having to catch passes from Landry Jones or Tajh Boyd. His hands have looked solid for the most part, and his athleticism is apparent during every practice.

Eli Rogers and Shakim Phillips have each impressed as well. Rogers has struggled to catch the ball cleanly a little more during the past two practices, but he’s quick and explosive in his footwork. His performance even got an “Atta boy #17!” from one of the officials yesterday during 11-on-11s. Phillips isn’t quite as explosive, but he shows good balance and impressive body control along the boundaries to reel in tough catches. I’ve also loved seeing him stay after practice to get in extra reps with Tyler Murphy.

Devin Gardner is long, will play physical, and has pretty natural hands for a guy who hasn’t played a ton of receiver in his career. His routes are very much a work-in-progress, but he’s shown the ability to make tough catches outside his frame. I doubt Gardner makes the Steelers roster, but he’s shown he can be a legitimate practice squad candidate.

Ditto for C.J. Goodwin, who is an excellent athlete with suspect hands at times. He’s got serious hops and will battle for contested catches despite tight coverage. Also works hard after the catch. He’s a strong practice squad candidate who I believe the team really likes.

Darrius Heyward-Bey will never get it as a receiver, still struggling to catch the ball cleanly and jumping for passes around his mid-section that he should catch in stride instead. He’s a body-catcher with inconsistent routes and issues galore against press coverage (B.W. Webb rode him out of bounds yesterday with a strong jam, legally too I might add), but he has special teams value and the team believes he can block. I don’t understand it, but he probably makes this roster unless one of the young guys can show out on special teams. Pittsburgh simply values the unit to much to let him go.

I think five receivers probably make this team, and those individuals seem fairly set in stone at this point, but there will be an interesting battle for practice squad spots amongst the group. 1-2 players could make it, with the smart money going on Rogers and Goodwin right now. In any event, it will be a fun group to watch throughout the preseason, with most of us hoping that someone elevates their game enough to make Heyward-Bey irrelevant (did I say that out loud?).