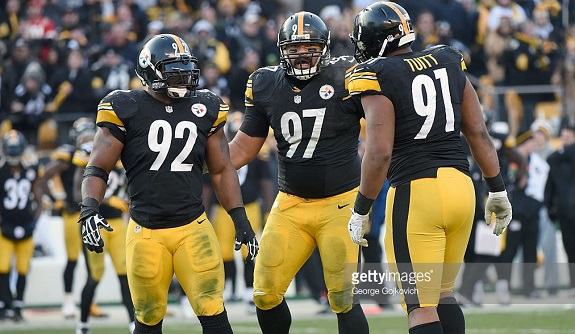 Entering the long offseason following the team’s disappointing 30-17 loss to the hands of their bitter rivals out of Baltimore, the Pittsburgh Steelers’ main objective was to tie up the severely loose ends of a defense the likes of which hasn’t been seen in the Steel City in a very long time. The team’s sagging play in the secondary could be seen coming for several years now, but the team’s traditional calling card, it’s pass rush, was abysmal, registering only 33 sacks. Needless to say, improvement in this area was directly in the team’s bull’s-eye this offseason.

However, later in the season last year, the team’s performance in this area went up, coincidentally as the playing time of James Harrison increased, along with the steady play of the recent recipient of a fresh 6-year/$59.25 million deal, defensive end Cameron Heyward. Heyward, like many other players in the Steelers’ complex defense, got off to a slow start to his career after being the team’s first round pick in 2011. However, he’s flourished as of late, tying Jason Worilds for the team lead in sacks last season with 7.5. He was rated as the sixth-best defensive end in a 3-4 last season, according to Pro Football Focus, and with new coordinator Keith Butler running the show, he should be looked upon as a building block for the unit.

“I hope last year wasn’t a breakout season because I think I can achieve way more,” Heyward said, according to SI.com. “I still have a mentality where I think of myself as a bust. I want to get better, and I want to shut people up.”

Getting double-digit sacks and/or Pro Bowl recognition appear to be two attainable goals Heyward has, and although football is a team sport, if one or both come to fruition, it’ll only smooth the growing pains of a very young defense going through transition.

Butler has some serious toys to play with in addition to Heyward, including the last two first round picks of the team, Ryan Shazier and Bud Dupree, both of whom possess extreme athleticism and explosiveness. Many of the concepts of the defense look to remain the same, but as Heyward stated, Butler will look to get the most out of everyone’s talents on defense.

“I think he wants to generate more turnovers and get more one-on-ones up front where we’re maximizing everyone’s talents and making sure everyone has a chance to get after the quarterback or get a turnover,” Heyward said, according to SI.com.

With their new defensive boss comes some changes as well from longtime stalwart defensive coordinator Dick LeBeau, who had a calmer, more quiet approach than the in-your-face, boisterous approach of Butler. He’s tried to light a fire under the team as far as creating an urgency goes, as the defense has a ways to go in order to be on par with arguably the league’s best offense. After all, not every team has a franchise quarterback.

“You understand that there’s a sense of urgency because you know Ben’s only got a certain amount of years left, so we’ve got to maximize those years now,” Heyward said, according to SI.com. “Last year we really started to jell and generate more turnovers, but we didn’t get the job done.”

Only a few short days separate us between now and the start of training camp as we anxiously await Butler to pull the cover off what we all hope will be a shiny sports car of a defense.