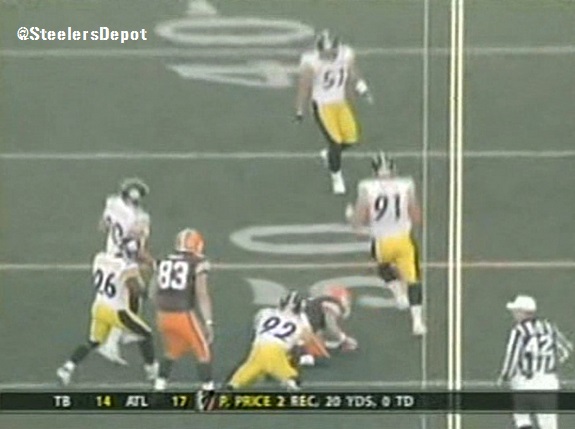 Pittsburgh Steelers linebacker James Harrison has recorded 71.5 sacks during his long career and on this Throwback Thursday, I thought we would take a trip back to 2004 once again and take a look at his very first quarterback takedown in the NFL.

During the Week 10 games against the Cleveland Browns, Harrison was forced to make his first career start due to starter Joey Porter being ejected prior to kickoff for an altercation with running back William Green. Harrison, in case you forget, thanked Porter for that during his retirement announcement last September.

“I appreciate Joey fighting and everything to give me that start,” Harrison said. “That was the first time they got a glimpse of what I can do. So I appreciate Joey Porter for that, my greatest supporter.”

Harrison’s first NFL start was a memorable one as it included his first career sack, which came with 6:49 left in the 3rd quarter.

On the third and five play, the Steelers rushed five players and that included blitzing two defensive backs on their right side. Harrison found himself singled up on Browns left guard Enoch DeMar and after breaking free from what looks like a good first punch and perhaps even a grab of a facemask, Harrison tracks down quarterback Jeff Garcia from behind as he attempts to escape the pocket.

Harrison finished the game with six total tackles and that led the Steelers. His sack in that game would be the only one he recorded in 2004.