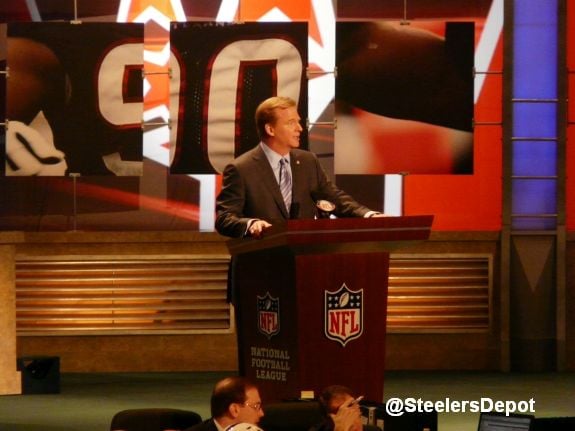 With training camp right around the corner, most Pittsburgh Steelers fans are eagerly anticipating seeing their team back in action on the fields of Saint Vincent College very soon. While we wait expectantly, I thought it might behoove the Pittsburgh fanbase to highlight some of the key names in college football to keep an eye on this season. After all, few franchises have adhered to the “build through the draft” mantra quite like the Steelers, a mindset the front office will undoubtedly stick to heading into next offseason.

While our focus will obviously be on Pittsburgh’s 2015 campaign, hopefully this list can serve as a helpful reference when your fall sports addiction has to be appeased by college football on Saturday. I’ve identified many of the top draft-eligible players at each defensive position group, but more names will surely be added to each list as the season progresses. The players are not listed in any specific order, although I’ll identify those I think are premier prospects in my comments preceding the positional list.

This list will include interior defensive lineman and likely 3-4 defensive ends. If you see a name that you think belongs in a different group, don’t fret. Each of these players will have plenty of opportunity to prove their versatility, right now I’m simply grouping them with the position they now appear best suited to play at the next level.

Adolphus Washington and DeForest Buckner lead what looks like a deep class at the position, but don’t be surprised if Anthony Zettel makes some noise with what should be a strong senior season. If juniors Robert Nkemdiche and A’Shawn Robinson come out, this class could be a truly special one.

There should be a decent amount of scheme versatility available, especially with the juniors as Andrew Billings and Robinson may both be guys who can two-gap some. Billings is a freak of nature athletically, and as strong as an ox, but don’t be surprised if he returns to school to give his remarkably raw technique some more work.

The Steelers could easily be in the market for a defensive lineman despite the recent acquisition of Stephon Tuitt and the long-term signing of Cameron Heyward. Steve McLendon, Cam Thomas, and Clifton Geathers are all currently slated to become free agents next offseason, meaning that there could be an open starting spot competition with Daniel McCullers at nose tackle.

This group includes 3-4 outside linebackers and 4-3 defensive ends, and there is tons of talent in both the junior and senior classes. Dadi Nicolas is an explosive and talented athlete off the edge from Virginia Tech, with a nasty shoulder dip and great natural feel as a pass rusher. He’s undersized at 6’4, 236 pounds however, and desperately needs to bulk up to handle NFL power.

Shilique Calhoun could stand to add some muscle as well, but a lightning first step and top-notch length are his calling cards. Shawn Oakman may be the biggest freak in the draft at 6’9, 280, but he’s really raw and inconsistent right now.

The junior group is highlighted by who I believe is the #1 draft-eligible player in the country in Joey Bosa, Ohio State’s phenomenal defensive end. Size, quickness, power, football IQ, instincts, you name it, Bosa has it. If he declares this year, I’ll be shocked if he isn’t a top five pick.

Jarvis Jones’ time in Pittsburgh could be coming to a close, so depending on how Arthur Moats plays this year, the Steelers may again be in the market for an outside linebacker. It should be another deep class with plenty of potential, albeit not on the level of this year’s edge defender group.

This group includes any inside linebackers and 4-3 outside linebackers, which often are interchangeable positions at the college level. It is going to sound strange based on the past two rather average linebacker classes, but this may be the most talented position in the 2016 draft if the underclassmen declare as expected.

The juniors have two legitimate top 15-20 picks in Jaylon Smith and Myles Jack, two versatile and athletic freaks with a nose for the football. Both just playmakers who love the game. Scooby Wright is another junior who will receive a lot of attention as a true middle linebacker with some thump in his pads, while Darron Lee represents the redshirt sophomores as one of my favorite players in the country.

We haven’t even mentioned the senior group, which has plenty of potential as well. Eric Striker plays more of an edge rushing role for Oklahoma, but he’s vastly undersized for that position at 6’0, 223 pounds, so a move to linebacker in the NFL seems likely. Reggie Ragland is a hulking, physical inside linebacker, while Terrance Smith could be poised for a big year at Florida State.

There’s a lot of depth in this class, but Pittsburgh is as set as any team in the NFL at inside linebacker, so don’t expect much action here.

The importance of the cornerback position grows every year in the NFL, and just about every team in the league enters each draft looking for talent to fill their secondary. This class shouldn’t disappoint, especially considering the wealth of juniors that will likely enter the NFL next spring.

Jonathan Jones’ stock is already rising despite his lack of ideal size, as the feisty corner shows good ball skills and awareness in coverage.William Jackson and Kevin Peterson will also receive a good amount of attention amongst a solid, but unspectacular senior class.

The junior class could have one of the top corners to enter the draft in some time in Vernon Hargreaves. While the Florida defender has the ideal size, length, and athleticism for the position, I’ll be watching to see how much his technique and ball skills improve this season.

Tre’Davious White and Kendall Fuller are also top-tier corner prospects with the length teams are looking for. Fuller’s athleticism will be under the microscope this season, while White needs to improve as a tackler. Jalen Ramsey looks set to move to cornerback this year for Florida State, his more natural position, and should be one of the fast-risers of the draft process throughout the season.

Keep an eye on William Likely from Maryland as well. He’s undersized at 5’7, 175 pounds, but the kid just makes plays and flies all over the field.

Pittsburgh obviously addressed cornerback heavily in this past draft by bringing in Senquez Golson and Doran Grant, but Antwon Blake and William Gay will both be unrestricted free agents next offseason. Much will depend on how things go this season, but Pittsburgh will undoubtedly be watching this class of corners carefully for any mid-late round gems.

It is an exciting safety class for the first time in what feels like quite awhile, but while the group may be talented, there are many questions still to be answered. Can Jalen Mills stay out of trouble? Can Deon Bush channel all his ability and become a full-time starter? Is Ramsey best suited for corner or free safety? Is Su’a Cravens best position at linebacker, or safety?

Karl Joseph is a hard-hitting safety out of WVU that I like a lot, but there will be some that are concerned he lacks cover skills in the open field. Von Bell has an opportunity for a huge year in Ohio State’s defense, as he continued to show growth last season.

All of those names will attract plenty of attention, but there should be room for some outliers to move up boards as well this season. The Steelers could very well be in the market for a starting safety next spring, depending on what Shamarko Thomas shows this year.