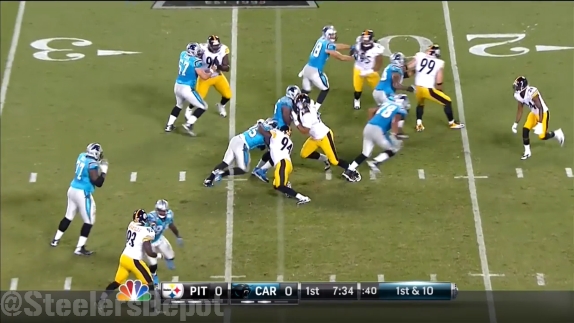 The next topic of conversation necessarily splinters off into two sub-sections when it comes to Lawrence Timmons and the Steelers of the Super Bowl era, because while he started a Super Bowl for the Steelers in 2010, he did not do so at the position that he is now playing, so we have to touch on both the position and the player.

Since he was drafted, and since he entered the starting lineup in 2009, Timmons played the mack linebacker spot, or the weak-side linebacker spot who is typically smaller and faster and takes on less blocks, able to run clean because the offense commits more blockers to the opposite side of the formation.

That was Timmons’ game for most of his career, but he transitioned to the signal-calling buck position on a full-time basis last season. During this generation’s Super Bowl era, that position was commanded with authority by James Farrior.

Under Farrior’s guidance, the Steelers’ defense was routinely in order and functioned cohesively, which was an underrated element of their success during that era. He regularly registered over 100 tackles on the season as the team leader, adding a few sacks and a few turnovers to boot.

Timmons has become such a player as well. In fact, he has registered five or more sacks in a season three times, and averages more than a pair of turnovers per year—despite not registering any last year in his first Pro Bowl season.

Timmons was huge for the Steelers in 2010, registering a career-high 135 tackles to go along with strong coverage skills, defending nine passes and intercepting two, adding a pair of forced fumbles for good measure at the mack spot next to Farrior.

With Farrior’s retirement, and his replacement having moved on, it was Timmons’ time to step into the commander’s seat, which I believe took him some time to get adjusted to. But he settled down quite well by the end of the year, and seemed poised to lead this next generation of the defense, both vocally and by example, as he grooms the next mack linebacker across from him.