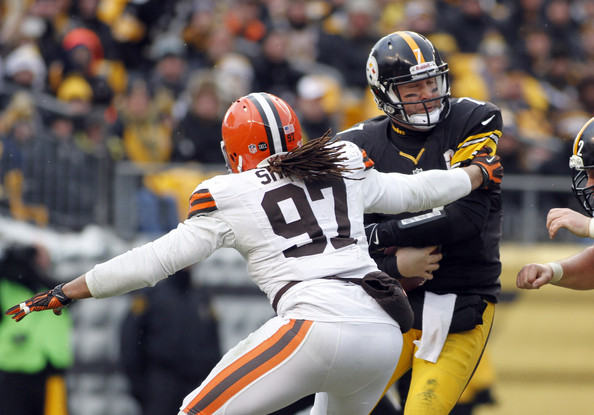 As training camp fast approaches, I’ve decided to break down the current state of the rest of the AFC North heading into the 2015 NFL preseason. A comprehensive Pittsburgh Steelers breakdown will follow my analysis of their three divisional opponents early next week.

Today we’ll take an in-depth look at the Cleveland Browns, who finished last season with a 7-9 record, marking their seventh consecutive losing season. It was however, the most games Cleveland has won since their last winning campaign in 2007, when the team went 10-6. The Browns defense seems to be trending upward, but concerns abound offensively at the quarterback and skill positions.

The Browns managed to steal one game apiece from the Steelers and the Cincinnati Bengals last year, but were swept by the Baltimore Ravens despite two close contests.

The offensive line might be the best in football, as left tackle Joe Thomas, second-year guard Joel Bitonio, and center Alex Mack anchor an outstanding unit. Mitchell Schwartz and John Greco make up the right side of a group with no weaknesses, a good thing considering they’ll be expected to carry a struggling offense this season.

Perhaps no player in the NFL will be under the microscope like Johnny Manziel will be this season, as he tries to prove that his horrendous rookie campaign was a fluke. Josh McCown currently sits atop the depth chart as the starter, but he isn’t the answer and Cleveland knows it. Eventually they’ll turn to Manziel, who’ll need to be light years better in 2015 for the Browns to make noise in one of the toughest divisions in football.

He won’t have much help unfortunately, as the Browns look to be without their top target in Josh Gordon again this season. The team’s refusal to draft top-tier talent at the wide receiver position over the past several years is puzzling, but they did bring in Dwayne Bowe to be Manziel’s go-to-guy this fall. Andrew Hawkins, Taylor Gabriel, Brian Hartline, and Travis Benjamin make up a capable, but far from elite group of pass catchers that will work to offset the lack of impact the team will likely have at tight end. Thanks to the offseason departure of Jordan Cameron to the Miami Dolphins, Gary Barnidge and Jim Dray will take over the tight end duties in Cleveland, a duo that has combined to average just under eight catches a year collectively over their combined 12 seasons of NFL experience. Rob Housler will also be in the mix.

The running back spot features Terrance West and Isaiah Crowell, both of whom have shown flashes, but were ultimately underwhelming during their rookie seasons last year. Duke Johnson brings exciting explosiveness and game-breaking ability to an offense in desperate need of it, so look for the unproven rookie to lead the way on the ground this season.

The Cleveland secondary is loaded with talent, as Joe Haden, Tramon Williams, K’Waun Williams, Tashaun Gipson, and Donte Whitner were all among the highest-ranked players at their positions according to Pro Football Focus last season. Pierre Desir really began to shine towards the end of 2014, and second-year corner Justin Gilbert should be ready for a bigger role this season. We haven’t even mentioned Ifo Ekpre-Olomu, Ibraheim Campbell, and Charles Gaines, all of whom were highly-touted selections this past spring. It is a secondary that has depth, talent, and growth potential unlike any other in the NFL.

The worst rushing defense in the NFL last season will look for a dramatic turnaround in 2015, a move which the team began in this year’s draft by reeling in nose tackle Danny Shelton, edge rusher Nate Orchard, and defensive end Xavier Cooper. All three players could start Week 1, and how they play will go a long way toward determining whether the front seven is going to get pushed around for another season or not.

Paul Kruger was exceptional off the edge last season with 11 sacks, but it was the first double-digit effort of his six-year career. He’ll likely need to carry the pass rush again, unless former first round pick Barkevious Mingo is finally ready to make good on his abundance of talent this year. If the Browns can find a way to get to the quarterback consistently, this defense could be among the scariest in football.

The Browns have undoubtedly made strides, and will continue to be a competitive group in 2015 if they can stay healthy. But until Manziel can prove some semblance of development from last season’s atrocious showings, it is difficult to expect much from Cleveland offensively. They simply don’t have the individual talent to make teams pay down the field, and in today’s NFL that is a vital component for offenses to possess. Cleveland could work their way to 8-8, but faring any better will depend almost entirely on what Manziel is capable of in his second season.