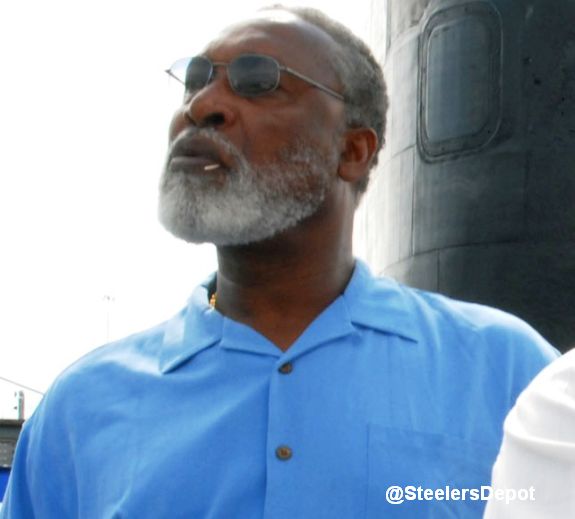 Rounding out the defensive line with the ends. Jon chose first and selected L.C. Greenwood while I pick Aaron Smith.

We’ve had some bitter competitions at certain positions when discussing the Steelers All-Time Team, with close calls at wide receiver, running back, and center. But while Dwight White and Aaron Smith deserve plenty of respect for their accomplishments in Steelers history, the undisputed choice for the best defensive end to ever lace up cleats for Pittsburgh is L.C. Greenwood

Greenwood was the quietest member of the famed Steel Curtain front four, the perfect complement to the violent White, the ferocious Joe Greene, and the enigmatic Ernie Holmes. Make no mistake, Greenwood was in no way soft, consistently utilizing his 6’6, 245-pound frame to dismantle offensive linemen with power and quickness. One of the best pure athletes on that legendary defense, Greenwood was the finesse that an ultra-physical defense desperately needed at times.

Don’t get me wrong, Greenwood’s work truly stood on its own, as he collected 73.5 sacks over his 13-year career, good enough for second all-time in Steelers history behind Jason Gildon (sacks were an unofficial statistic at the time however). Greenwood gained repute for interrupting quarterback’s passing lanes with his length, frustrating the opposition with batted passes and tipped balls at the line of scrimmage.

Few were as quietly dominant and consistent as Greenwood, who never felt the need to dwell in the spotlight. In fact, the defensive end once told reporters that while he would be honored to be in the Hall of Fame, he didn’t mind if he never got in because the Steeler inductees from that dynasty team already represented the franchise’s accomplishments. If that isn’t a guy with a team first mindset, even after his playing days, I don’t know what is.

The man nicknamed “Hollywood Bags” because of his desire to become an actor after his football career was over, was simply all class throughout his life and during his time in Pittsburgh. His list of accomplishments is impressive; six-time Pro Bowler, two-time All-Pro, six-time All-Conference, four-time Super Bowl champion, NFL 1970s All-Decade team, Pittsburgh Pro Football Hall of Fame, etc, etc. But perhaps even more impressive was the way with which Greenwood built his legacy before his death in 2013, a legacy that needs and deserves to be honored with a Hall of Fame induction. It is one of the great failures of the selection committee that Greenwood awaits his enshrinement to this day, despite his lengthy list of accomplishments.

While I find it inexcusable that one of the most decorated and beloved players in Steelers history doesn’t have a bust yet, the reality is that Greenwood wouldn’t have cared. The lanky defensive end knew what the team and his mentor Chuck Noll had accomplished, far outweighed any individual honor that could be bestowed upon him. He may not have had the violent temperament or the bruising style of many of his Steel Curtain counterparts, but Greenwood was exactly what Pittsburgh needed at the perfect time. And some day he’ll receive a shrine in Canton, but for now he’ll have to settle for being named the greatest defensive end in this proud franchise’s history. Knowing Greenwood, that is probably good enough for him.

I started this series picking all of the Noll-era players. How things have changed. Judging the best defensive end it tough when you have to compare eras and schemes, something you’ve pointed out in the comments. I understand, there is no way to come up with a definitive answer or perfectly compensate for the differences.

But Aaron Smith, in a role where he only had to stuff the run, did it all. I don’t care if he made one Pro Bowl? You think that’s his fault? Nah. Other defensive ends had shiny sack numbers, the Dodge Charger of statistics. Smith was rugged, all-purpose. He’d get you through the winter.

Pittsburgh knows a thing or two about winters.

A fourth round pick from Northern Colorado was not supposed to start 15 games in his second year. Record eight sacks in his third. Or 44 in his entire career.

Four times Smith helped lead a defense that allowed the fewest points in the league. Eight times the Steelers finished in the top five in rush yards allowed. He epitomized the role of a five tech. Hold your own against the run, get after the quarterback when you could. He was as much a staple of the defensive line as Casey Hampton or anyone else.

His presence has had a ripple effect. Steve McLendon spent three years learning from him on how to be a professional. Cameron Heyward a crucial rookie year. The way to carry yourself, the way to take pride in your craft, the way to get after the football. Heyward, and Brett Keisel, in turn, have passed that onto their mentees like Stephon Tuitt. And he’ll pass it on down to whoever is next in line. There’s such a vital value to that even if it can’t be quantified and will forever make Smith great.