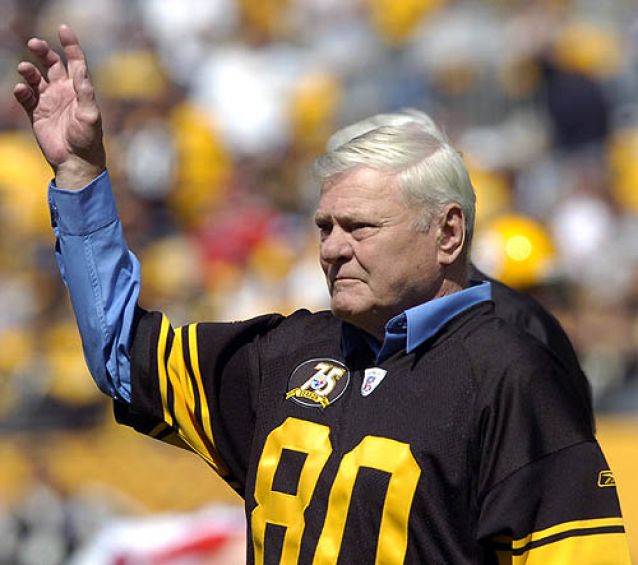 Our next to last debate, focused around the cornerbacks. Jon chooses Mel Blount while I make a daring case for Jack Butler.

I think there’s a good chance that Mel Blount is one of the most overlooked Steelers of the 1970s dynasty. A team with so many dynamic personalities, rugged athletes, and broodingly violent forces, yet one of the more physical cornerbacks in NFL history often gets left out of the discussion on those Super Bowl-winning teams.

Make no mistake, Blount was an unmitigated force at cornerback, a 6’3, 205-pound, bump-and-run defender who intimidated receivers with physicality and top-notch hand usage down the field. Would he be heavily penalized today? Probably, but just because they’ve sissified the sport in the modern age, doesn’t mean Blount should suffer in Steelers lore for the fact that he played by the rules back then. Blount practically invented press coverage, a man far ahead of his time for how big he was for a cornerback. What is also often lost in translation, is that after the rule change to keep defensive backs from jamming receivers past five yards, Blount still excelled over the final six seasons of his career, making the Pro Bowl three times.

There is little doubt in my mind that even with the rule changes Blount would thrive in today’s NFL, as his athleticism and length would fit perfectly into many schemes around the league today. His prowess in zone or man coverage was apparent snap-to-snap, as Blount regularly displayed the ball skills and instincts of one of the best corners to ever play the game.

The big defensive back’s 57 interceptions are still a team record which should stand for quite awhile, given that no current Steelers is remotely close to him in the history books. A five-time Pro Bowler, four-time All-Pro, Defensive Player of the Year winner, Defensive Back of the Year award, a member of the 1980s All-Decade Team, and a Pro Football Hall of Fame induction in 1989 (his first year of eligibility) are just some of Blount’s many NFL accomplishments. Number #47 excelled for 14 years in Pittsburgh, where he spent every one of his NFL seasons and missed only one game. ONE GAME.

Blount has gone on to do great work in the community, starting the Mel Blount Youth Home as a shelter for victims of child abuse in 1982. That work continues today, a credit to the heart that Blount has always had to help those in need. Beloved by his teammates, Blount helped carry the Steelers’ relentlessly physical style of play past the front seven and into the secondary.

Perhaps Jack Ham said it best when he told the media, “When you create a cornerback, the mold is Mel Blount.”

Wise words, Mr. Ham. There have been a lot of excellent cornerbacks in Steelers history, but Blount set the precedent for them all. No one has surpassed him yet, as the lanky corner lives on as the best the franchise has ever seen at the position.

This was a tough one. I know, I’m passing up Rod Woodson here. For you, dear reader, that’s probably blasphemous. But I’m a sucker for the pre-Noll players and Butler is one of my all-time favorites. He only played nine years before a wretched knee abruptly ended his career, a shame because he was in the midst of his best stretch of his career

Most people don’t pay attention to his career. Jon is one of those young people who don’t appreciate the way they played back in my day. Ignore the fact he’s older than me.

Four Pro Bowls and a three-time All-Pro. Including the 1959 season where Butler played in only seven games and picked off two passes. The AP, Sporting News, New York Daily News, and UPI still all gave Butler the first team nod. He’s second all-time in Steelers history with 52 interceptions despite playing in 103 games, a fraction of what Blount (200) Donnie Shell (201) or Dwayne Woodruff (157) did. The next player on the list with fewer games than Butler is Glen Edwards‘ 89 and he finished with just 25 picks.

Butler still has the most total interceptions of any Steeler after three seasons with 21. Blount finished with more but only had more than six in a season once- Butler did it four times. On a per game basis, this is how they compare.

That should give you a clear idea of the level of dominance Butler played at.

A 1953 game against the Washington Redskins was one of the finest individual defensive performances in team history. Four interceptions, including a pick six to give the Steelers the lead and the win in the 4th quarter. On that day, Pittsburgh would force seven turnovers and with the victory, on the final week of the year, get back to .500. A successful season back then.

No other Steeler has accomplished such a feat since and that mark still ties the NFL record.

Blount was revered for his physicality but Butler was just as tough. In that era, you had to be. He played on offense and defense where hard hits with few restrictions were commonplace.

I know this is *technically* restricted to what players did on the field but it’s too difficult to ignore with Butler. After his knee injury ended his career, and a brief coaching stint flamed out, Butler became a scout. He turned it into being the first scouting director for national service BLESTO – the “S” stands for “Steelers” – for 44 years until his retirement in 2007.

He was finally elected into Canton in 2012, 50 years after being eligible. An old-school guy finally getting his due. I know this because I tried to get an interview request, going through one of his family members. I thought it was going to happen until I was notified he simply stopped doing interviews. A guy who preferred to stay out of the spotlight as much as he could, embodying the time period he played. That was reflected in his Hall of Fame speech. Eloquent and grateful but short. The briefest HOF speed ever, a brisk three minutes and 42 seconds. But that’s who he was and that is more than alright.

Jack Butler died in May of 2013. Though he’s enshrined in Canton, I don’t want Steelers’ faithful to forget about him. Like so many of the pre-dynasty players, it’s easy to do so.

But he was the best. And that should never be forgotten.