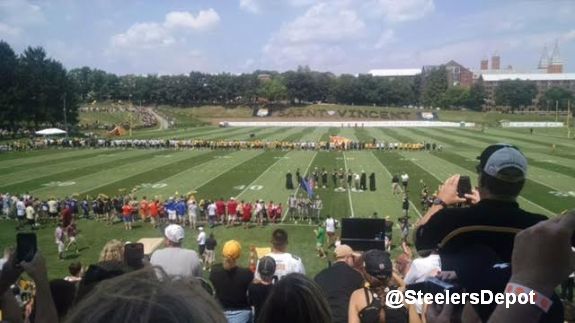 Training camp season is now upon us, and as we dive into the midst of this most curious of periods within the football calendar, providing our most extensive coverage of the proceedings to date in our history, we hope you enjoy the ever-increasing level of access and detail that this site, and others, are able to bring to the experience.

While I might not have the opportunity to be present at the Pittsburgh Steelers’ training camp sessions myself, the rest of our crew has that well-covered and then some. But what I can provide is a brief guide about how to parse and process the information and reporting that we consume when it comes to training camp.

No doubt the majority of our regular readers are more than familiar with these details, but for the benefit of the more casual observer, I hope that they prove to be an asset to your understanding of what we are reporting.

It’s already become apparent, for example, just after the first day of practice, that opinions on how Cortez Allen held up varied significantly depending upon what the particular reporter had the opportunity to observe.

While this still happens to an extent during the season, the incident of variability is drastically reduced purely and simply for the reason that we have the opportunity to review the material endlessly, whereas that is not a possibility for practice sessions. So if somebody misses something, that’s it.

Another thing to be wary of is the fact that pecking order can and will vary significantly. This is fairly self-evident, but there is a sub-set of this point that I want to stress, which applies especially to the defense, and is a point that the coaches bring up every year.

When people report on each hierarchy of the team with terms such as ‘second-team defense’, it’s important to understand that this is not uniform beyond position groups. The second-team defensive line may be in on the same series as the third-team linebackers and fourth-team safeties, for example. The coaches like to mix and match in this way, so there often simply isn’t a ‘second-team defense’, but rather a hodge-podge for experimental and observational purposes.

Perhaps the most important thing to keep in mind above all else, however, is just the nature of roster battles and the relative level of competition. A third-string outside linebacker out-classing a third-string offensive tackle, for example, certainly is not an indication of a diamond in the rough. It may just mean that the linemen will be flipping burgers sooner rather than later.

The roster itself is composed in such a way that makes sense for practice purposes. You need so many offensive linemen to construct three groups of linemen just to get all of the necessary work in, for example. This will also be reflected in how the 53-man roster and practice squad are assembled, based on need, and not necessarily the 53 (or 63) best players irrespective of position.

This is just a small assortment of pointers that will be helpful to kind in mind while reading training camp reports, both in how to process the actual reports themselves and how to frame the data into a broader picture. If you have any other pieces of advice, feel free to share in the comments section.